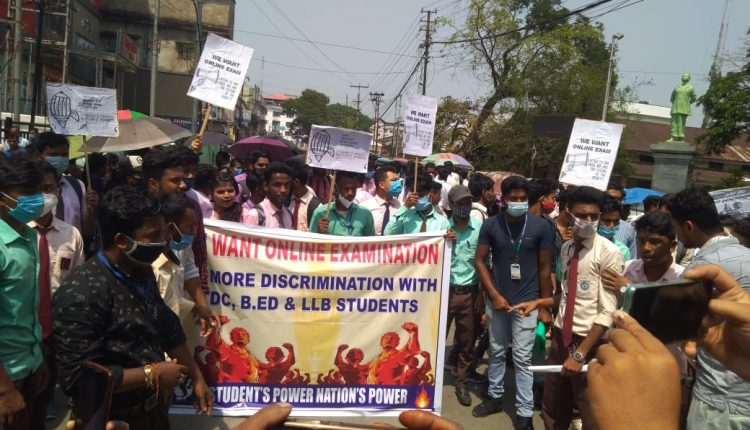 Students of Degree Colleges affiliated under Assam University Silchar has launched a massive protest. Students from Hailakandi and Karimganj also joined hands and together they are demanding for online examinations.

According to them, the protest is against the discrimination with the students of affiliated colleges as the direct students of Assam University Silchar will appear for online examinations while students of affiliated colleges are asked to appear for offline tests starting April 8, 2021. They also pointed out that the number of COVID cases are significantly rising in the country and thus it is risky to appear for offline tests. It is worth mentioning here that there were hundreds of students staging roadblocks and demonstrations offline, most of them were not wearing a mask.

After discussion with the representatives from the administration, they have decided to withdraw the blockade. The additional deputy commissioner of Cachar intervened and only then did the students withdrew their protest momentarily.

The ADC wrote to the Registrar of the Assam University Silchar. “As per our telephonic discussion you are to conduct a meeting with a few representatives of the students at 4 pm and resolve the matter at the earliest. It is also informed that circle officer Antara Paul will attend the meeting as representative from Cachar district administration,” stated the note.

As per latest available information, the students’ representatives have reached Assam University Silchar. However, they have been kept waiting and the meeting is yet to begin.