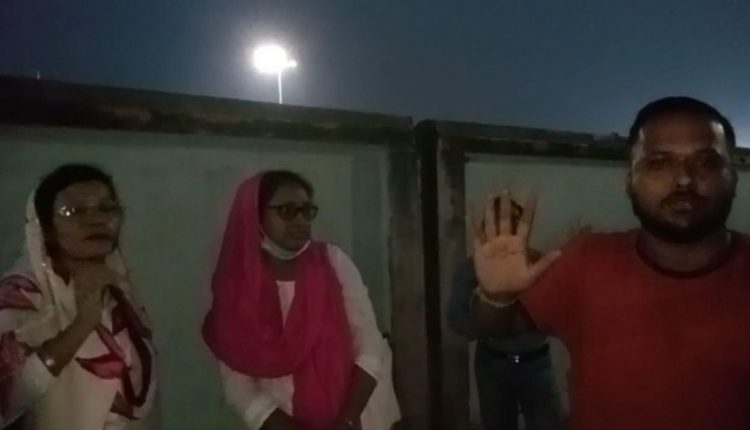 In chaotic events, members of Hindu organisations have lodged a complaint in Tarapur Police Outpost against two ladies on the allegations of preaching Christianity in the Hindu-dominated area of Bhasha Sahid Lane, Silchar.

The activists of Hindu Rakkhi Bahini (Army for protecting Hinduism), today at around 4 pm, gheraoed two mid-aged women, Nitu Goala and Shirsha Bagdi, residents of Tarapur, from Bhasha Sahid Lane. They were allegedly playing messages of the Bible on an amplifier and distributing leaflets (with Biblical content ), and allegedly urging people proselytizing to Christianity.

A Police team under OC of Tarapur Police Outpost rushed to the spot and brought these two ladies to the police station.

According to the description of Bijoy Nath, activist of Hindu Rakkha Bahini, Nitu Gowala, and Shorsha Bagdi, who are also residents of Tarapur locality, they were playing messages of Christianity on an amplifier.

They called up the residents and urged them to follow Christianity because their faith is superior. These ladies were also distributing leaflets among people. The activist also alleged that these women were luring residents, saying they could get mental peace if they converted to Christianity to attain God. Concept like faith healing was also preached by the two ladies.

“They were preaching Christianity on the amplifier and saying locals don’t have to perform puja or anything; their god and faith are superior,” Bijay Nath said. “Their preaching has hurt Hindu sentiment, this is a Hindu Place they can’t do anything like this.” He added.

They also allegedly recovered cash from them, and they were luring people with money to convert their faith.

Speaking with Barak Bulletin, OC of Tarapur Police Outpost Ananda Mehdi said that the police is probing the matter. “It has been brought to our notice. We have detained both the women involved and investigating the matter,” said OC Medhi.