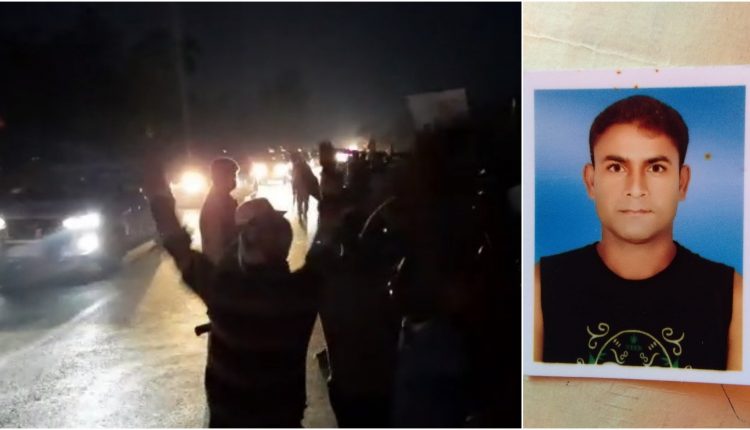 Chief Minister of Assam Sarbananda Sonowal has reached Silchar today. Tomorrow, BJP President, JP Nadda will visit the city to kickstart the party’s assembly election campaign. Miles ahead of any opposition parties when it comes to preparedness for election, BJP is going all guns blazing to promote the party’s achievement.

The CM has inaugurated a historic Bio-Diversity park earlier today in Dholai. While his convoy was passing through Ramprasad Pur, near Dholai Bazar, it encountered a bunch of protesters demonstrating with placards in their hands. They were raising ‘Hai Hai’ slogans and demanding the CM to probe into the case of his minister Parimal Suklabaidya’s driver going missing.

Till the last car of the convoy passed, the protesters continued their sloganeering. The placards read, “Where is Parimal Suklabaidya’s missing driver”. The Police controlled the protesters near the road and they could not create any obstruction for the minister.

It is worth mentioning here that Kajal Dutta, who as per his mother Shefali Dutta- used to work as the driver of Dholai MLA and Forest and Environment, Fisheries and Excise Minister Parimal Suklabaidya, has been missing since Aug 16, 2016.

The matter is sub-judice as Shefali Dutta has approached the Gauhati High Court with a prayer to transfer the case to CBI or any other Investigating team as “deemed fit” by the court for finding her missing son.

Shefali Dutta has also mentioned in her petition that she came to know “from reliable sources” that her son (Kajol Dutta) had been illegally detained by the minister with aid of Cachar Police. The mother alleged that Suklabaidya is exerting his “Political power upon the police for not conducting an investigation” of the case.

“The petitioner respectfully begs to submit that she being an old lady of 70 years is now on the verge of starvation as to date, apart from false assurances and vague investigation she has received nothing,” reads the petition.

It adds, “In spite of being aware that the said fact may take away her life but to protect the life of one whom she has given birth she knocked all possible door with a hope to get back her son.”

Now that the locals are trying to draw CM’s attention to this case, it remains to be seen if Kajal Dutta gets traced…