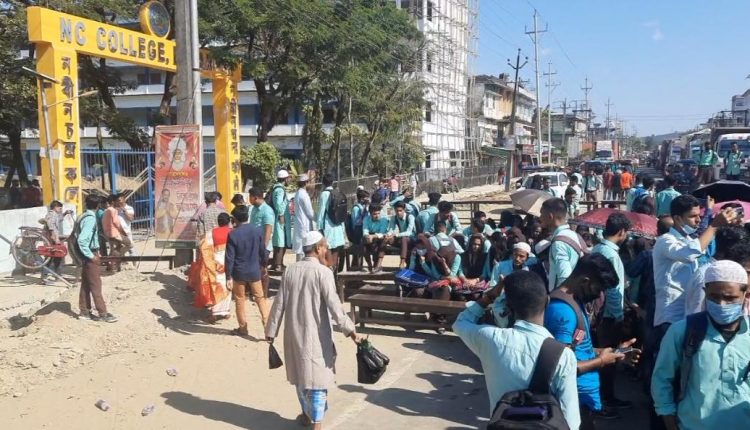 Sibli Barbhuiya a local resident who studies at NC College in Badarpur was detained by Police at around 3.05 am in the morning. According to the Students’ Union of NC College, he was detained on the basis of an FIR lodged by MLA Katigorah Amar Chand Jain.

Yesterday afternoon, in a head-on collision between a Maruti Suzuki Alto car and an overloaded truck, five students aboard the Alto lost their lives. Seeing his collegemates in horrible conditions, Sibli Barbhuiya had jumped into the ditch to rescue them.

“He does not know how to swim and yet he jumped into the pond. However, there was nobody from the local police station. After three hours when MLA Amar Chand Jain reached the spot, irked locals raised go back slogans. Like a coward, he rushed away well escorted by his private security officers. But, he went and lodged an FIR against Sibli Barbhuiya and he has been detained by the Cachar Police,” said Cultural Secretary of NC College.

The Students of NC College had blocked the National Highway, “Until Sibli Barbhuiya reaches campus we will not withdraw the blockade. This strike will snowball into a much bigger agitation,” warned the Cultural Secretary.

Meanwhile, All India National Congress leaders have also joined the protest. “In a democratic country, if the people question their elected representative, if they raise slogans or criticise their MLA should the MLA file an FIR? We have seen something like this for the first time,” said Mahila Congress President Sushmita Dev.

She added, “Now the question is why is the Police bootlicking the BJP leaders. They need to answer if they are here for the public or just for bootlicking BJP leaders. IPC 147 was pressed against the boy. 147 means charges of rioting. So, the biggest question if someone questions the MLA it implies rioting?”

As per the latest available report, Sibli Barbhuiya has been released by the Police and he is on his way to NC College. Police sources informed that he was not arrested but summoned for questioning.