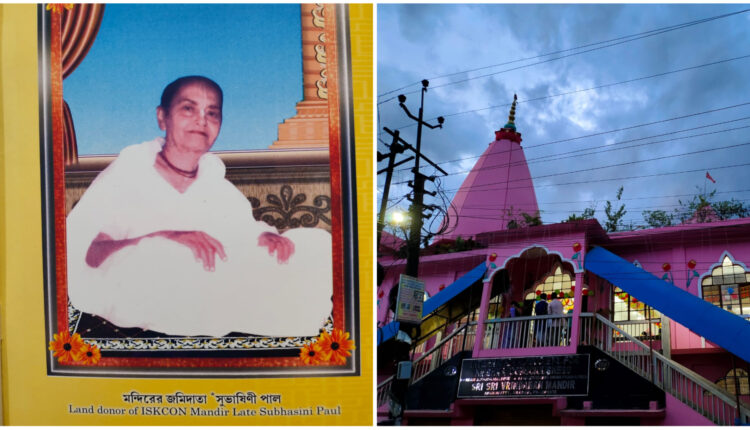 Did you know ISKCON Temple in Silchar is built on the land donated by Subhashini Paul? Here's the full story

ISKCON unarguably is the most successful international organisation to spread the Gaudiya Vaishnava tradition, founded back in the 16th century by Chaitanya Mahaprabhu. This movement started in West Bengal and has now spread around the whole world. The trust today has over a million congregational members worldwide, with rapid expansion within Russia and Eastern Europe. In India alone, ISKCON has over 150 temples, in almost all the major cities and towns. The society also has various educational institutions, study centres, restaurants, orphanages, shelter homes and refugee camps, not just in India but across the globe.

ISKCON also has a temple in Silchar, which has been here for the last three decades. It started with just a few disciples who came from Mayapur, West Bengal but today is the main center of activities within the entire southern Assam. It is also among the first temples in the entire North East India. As the world celebrates Janmasthami, here is the story of ISKCON in Silchar.

Gaur Nitai Das, the Founder and President of ISKCON in a conversation at his office narrated the story about the journey. Following are the edited excerpts from the conversation:

The preaching and spread of Krishna Bhakti movement began in Silchar and the suburbs back in the 80s. The first preaching centre was established in Mahaprabhu Colony under the leadership of Swarup Damodar Swami. The centre was not permanent and was set in a residential building. Many devotees who came from the Mayapur temple then, resided in the Shyamsundar Akhra of Tulapatty. They realized the need for a permanent centre for the sake of preaching. When saints from Mayapur would come to Shyamsundar, many devotees from Silchar would go to meet them and hear about Krishna’s consciousness. During those interactions, Subhasini Paul and Charubala Paul, both residents of Ambicapatty were so impressed with the idea of ISKCON, that they were ready to donate land to the trust to establish a temple. The temple that we see today has been built on Subhasini Paul’s plot. 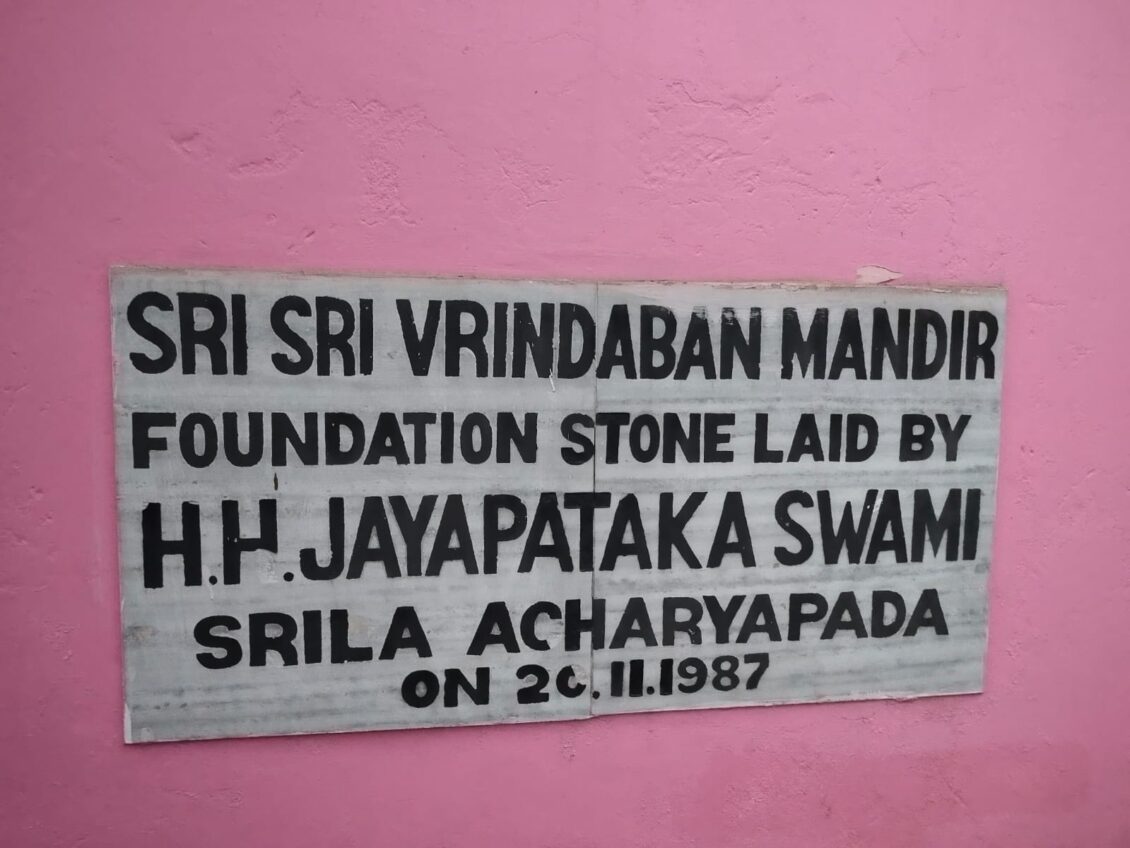 In 1984, HH Jaypataka Swami and Swarup Damodar Swami registered the land in the name of the temple at Silchar. Later three devotees, Nitai Pada Kamal Dash, Baren Das and Bankimary Das were given the responsibility to establish the Bhakti Preaching Centre at Silchar, but they couldn’t carry on with the responsibility due to weather conditions and the unfriendly behaviour of the locals. According to a published booklet during the silver jubilee of ISKCON Silchar, these devotees and later another, Mahamdhusudhan Das had to face trouble and objection from locals at every point during their stay here. In 1987 Gour Nitai Das got the responsibility for temple construction.

Gour Nitai Das was successful in winning the hearts of locals of Ambicapatty and just within 6 months, he along with some other disciples collected every required resource and did the groundbreaking ceremony on November 20, 1987. Gradually the construction began and many locals got inspired by the ideals of ISKCON. Some provided stone, sand, and cement for free, for the construction of the temple, while some also offered to provide their trucks to lorry these goods. Gour Nitai Das aka Gour Prabhu recalls two gentlemen Badal Das and Riotmol Gulgulia, who offered help to a great extent. 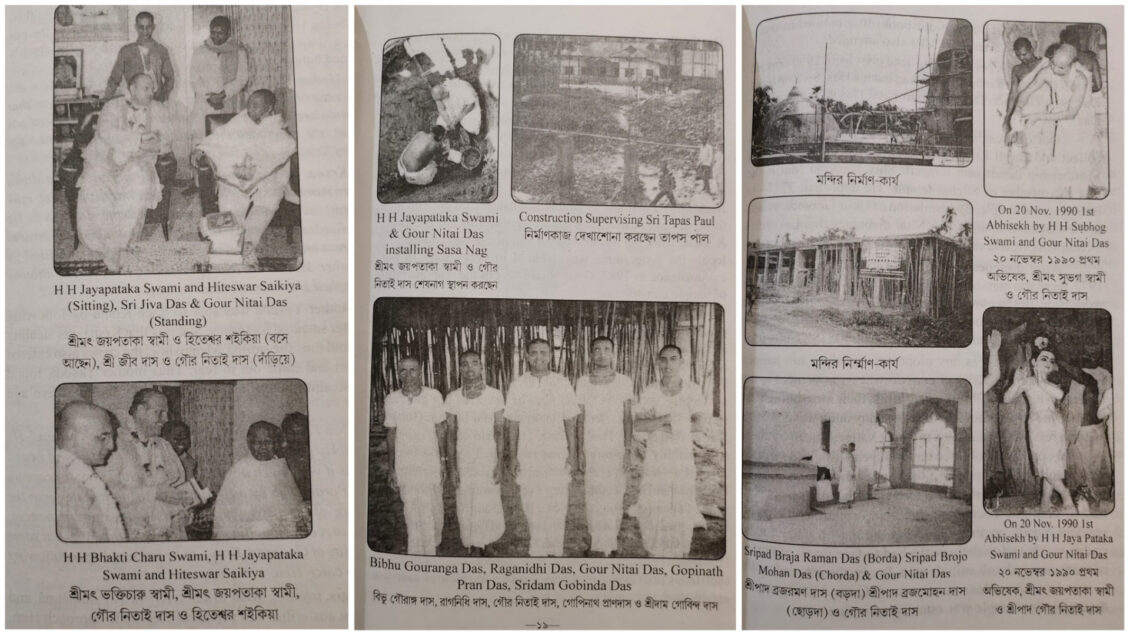 With collective help and devotion, the temple was inaugurated on November 20, 1990, three years after the groundbreaking ceremony. On the same day deity installation also took place in the presence of HH Jayapataka Swami and other Swamis from different ISKCONs across the country and also from international centers. Gour Prabhu recalls the day and says, “That day was very special, devotees and senior monks, not just from India but also from Russia (then USSR), America, London visited to attend the ceremony. Chief Minister of Assam of that time, Hiteshwar Saikia also came to the inauguration ceremony. The first abhisekh took place on that day. It was led by the holy hands of HH Jayapataka Swami”.

ISKCON has been here since then and today it’s 32 years old. “There are over four thousand devotees who took Diksha of Lord Krishna at ISKCON Silchar and there are innumerable disciples who come here from early morning till late night for abhisekh, darshan and aarti”, says Vaishnav Jivan Das, one of the earliest devotees of this temple in Silchar. 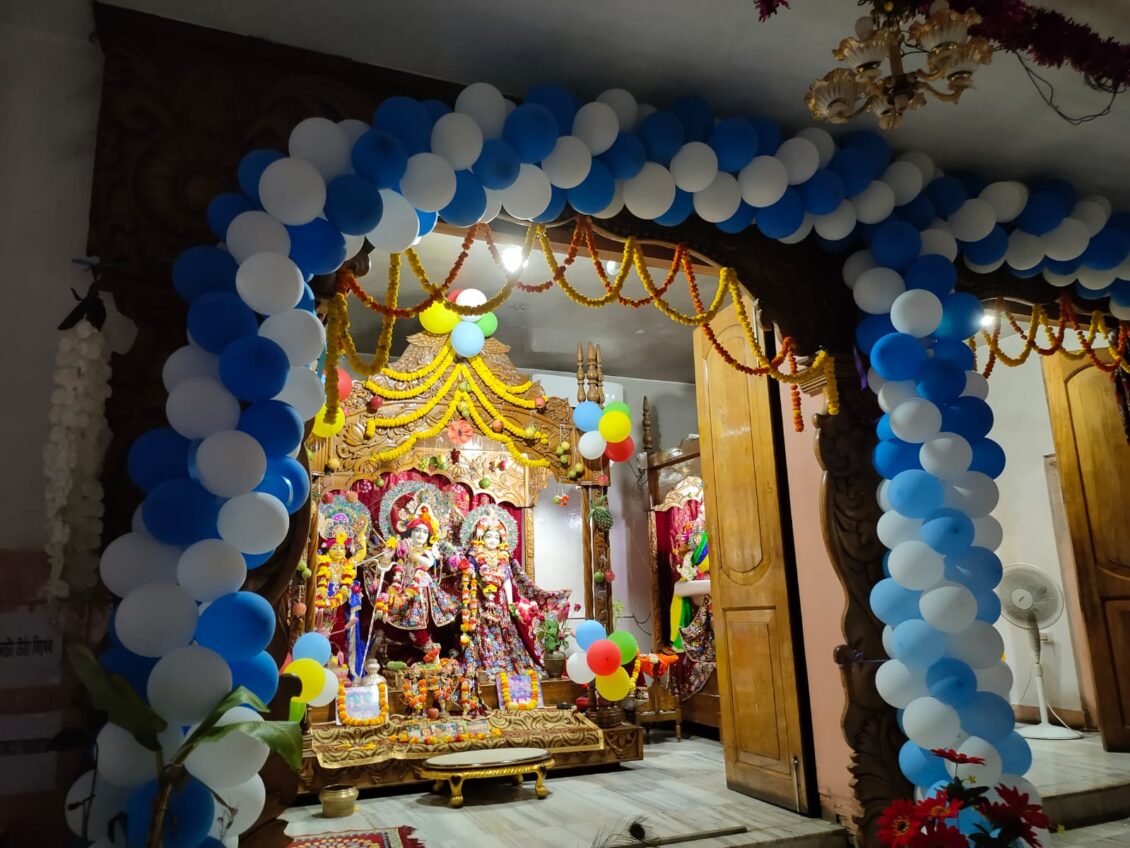 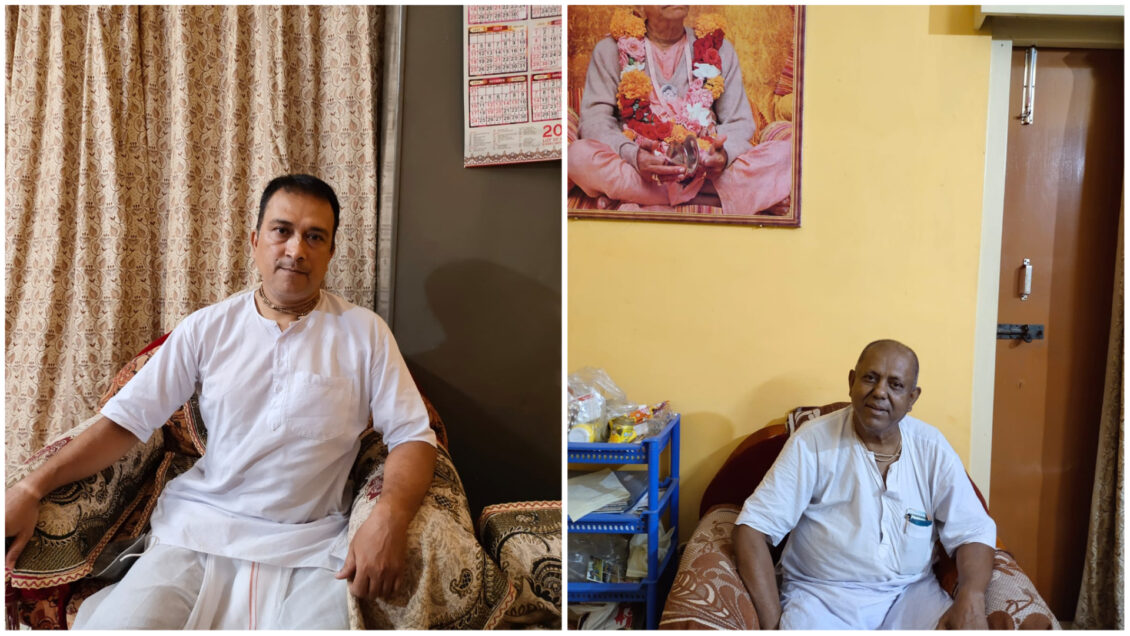 When asked how Krishna Janmashtami is celebrated in ISKCON, Gour Prabhu says, “For us every day is Janmashtami. But yes, today is very special, other than the routine worship and aarti, devotees can listen about Lord Krishna, his life and teachings from Bhagavad Geeta and Bhagavad Purana. Devotees are coming in large numbers to seek blessings today and at midnight there will be a special abhisekh”.

Other than worship and propagating ideals of Krishna, ISKCON Silchar also held Bhagavad classes for the youth where students are taught about the Geeta and the Purana. ISKCON promotes vegetarianism and the Gobinda Bhojanalay is today a 200-seater restaurant where devotees have mahaprasad daily. ISKCON also does various charity work like the “Food For Life” program and the Akshaya Patra Foundation is also a trust under ISKCON, which provides midday meals to school children. ISKCON has been active internationally to shelter refugees across the world and recently during the Ukraine crisis.