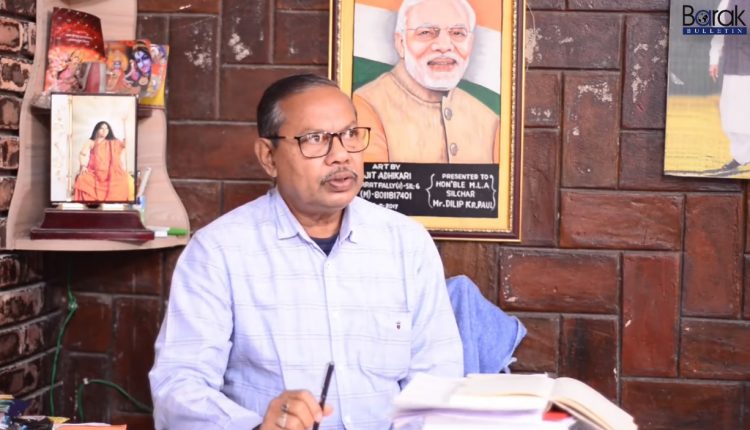 What comes as a massive development in Cachar’s political scenario, MLA Dilip Kumar Paul has collected the nomination form from the district election office.

Despite being a two-time MLA, Paul was snubbed by BJP for 2021. The party decided to field a new face in Dipayan Chakraborty from Silchar. Since the announcement was made by party’s general secretary Arun Singh, speculations were rife that Dilip Kumar Paul might contest independently.

It could just turn true as Paul’s representatives came to the election office and collected the nomination form. When asked about it, Paul said he won’t like to make an elaborate statement at this stage. “BJP has not trusted me with a ticket and therefore, I have no other option but to contest independently.”

It is worth mentioning here that, Dilip Paul defeated Congress’ Arun Dutta Mazumdar in the 2014 by-election by a huge margin of 37,441 votes. Mazumdar could only fetch 37,457 votes contesting against BJP’s Paul. In the 2016 Legislative Assembly Elections, Paul’s vote-share increased as he got 94,787 votes against Bithika Dev’s 54,867.

Sources in his office said that Paul was confirmed a seat in the 2021 elections and he had even gone to campaign in the Bengali-dominated areas in Bramhaputra Valley. The snub has come as a shock for Paul who had already started campaigning and preparing for the 2021 elections.

If he contests election from Silchar, it will be a three-way race. Though Congress is yet to announce the list of candidates, former Silchar Municipality Board chairman, Tamal Kanti Banik is favorite to get the ticket. On the other hand, BJP has already announced Dipayan Chakraborty as the contestant.

“It is certain the MLA Dilip Kumar Paul will contest independently in the upcoming elections,” said his office while responding to a query from Barak Bulletin.