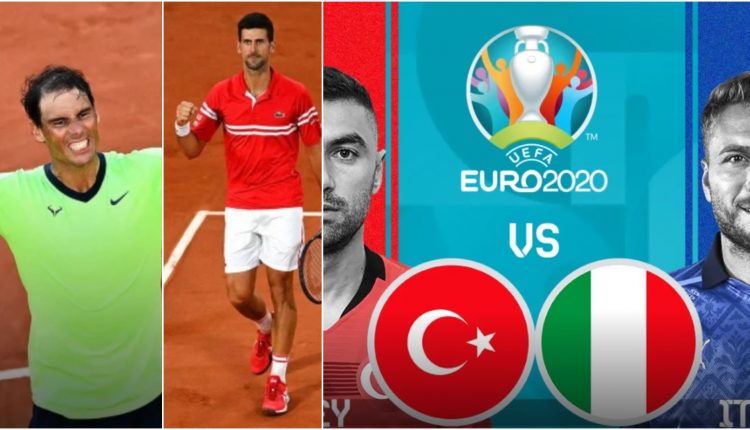 It’s an exciting weekend for fans of tennis, as the French Open 2021 is nearing its conclusion. Novak Djokovic (Rank 1st) and the king of clay, Rafael Nadal (Rank 3rd), Stefanos Tsitsipas (Rank 5th), Alexander Zverev (Rank 6th) are the ones who have made it to the semi-finals of the grand slam tournament of this year.

The first semi-final between Alexander Zverev and Stefanos Tsitsipas is scheduled to start from 6:20 pm IST on Friday, June 11. The second semi-final will see two arch-rivals Rafael Nadal and top-seeded Novak Djokovic battle it out for a ticket to the final of the French Open 2021, which is scheduled to start at 9 pm IST. Both the matches will telecast live on Star Sports Select and one can also live stream both the semi-finals at Disney+ Hotstar.

‘King of Clay Court’ Spaniard Nadal is just two wins away from his 21st Grand Slam title, which would break the men’s mark he currently shares with Roger Federer.

In another sporting event, the UEFA Euro Cup 2020, which was supposed to happen in June 2020 but later got postponed to June 2021 due to the Coronavirus pandemic, is going to commence tonight, from 12:30 am late at night (tomorrow morning) according to the Indian Standard Time (IST). The inaugural match will be played between Turkey and Italy from Group A. The match will be broadcasted live on Sony TEN2 (English), Sony TEN3 (Hindi), Sony TEN4 (Tamil and Telugu), Sony Six (Bengali and Malayalam). Those who prefer live streaming can do so on the SonyLIV platform as well.

Europe’s biggest international football tournament will be participated by 24 nation teams divided into 6 groups of 4 each. The UEFA Euro Cup Championship will run for a little over a month concluding with the Final on July 12 at the Wembley Stadium in London, UK. Meanwhile, for the first time in 60 years of the tournament’s history, 11 different cities across Europe will host the 16th European Championship.