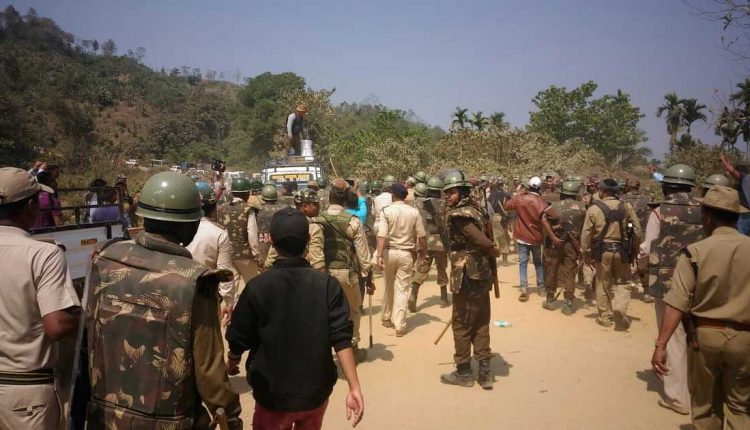 Drone images show a huge number of trees being cut in the Assam-Mizoram border; "Forest protection is must," DFO Cachar

Assam and Mizoram are in a boundary dispute. The Assam Government maintains that the boundary of Assam is sacrosanct while the Chief Secretary of Mizoram said the Survey of India’s map has been “Drawn out of imagination on the paper.” He added, “The map has never been verified.”

In such a scenario, the government of India has decided to deploy Shasastra Seema Bal in Assam and Border Security Forces in Mizoram. However, while Assam Police made camps for SSB jawans inside Assam’s territory the Mizoram Government has set up the camp inside Assam an area that the government of Assam says has been encroached.

Yesterday, Divisional Forest Officer, Cachar Sunnydeo Choudhury along with SP Cachar Bhanwar Lal Meena went to the interstate border for inspection. They were no allowed to pass beyond a point. To maintain peace and tranquility, the delegation agreed to retreat but then it decided to inspect the area through drone images.

“We have seen in images that trees have been cut to make a huge area plain. That is the area where the BSF camp has been set up. We have no clue where the wood is and how many trees have been cut down. We will go for further inspection in the next couple of days,” said DFO Sunnydeo Choudhury.

He added, “Whatever the border dispute is, the two governments along with the central government are looking into it. But the forest is important and its protection is a must.”

The locals in Lailapur area had blocked the road that connects Mizoram to the rest of the country. The blockade has been withdrawn after intervention from Dispur. The trucks are now plying to Mizoram, while their forces remain deployed inside the territory of Assam.