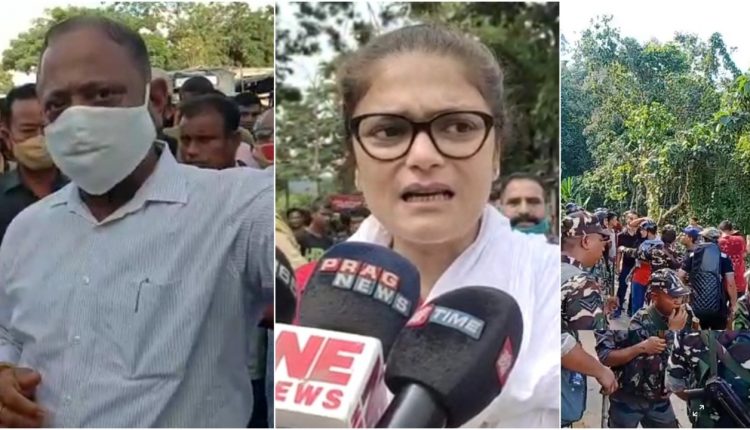 “Home Minister, Hai Hai” slogans raised in Lailapur area, located in Assam – Mizoram border. Under Dholai legislative assembly constituency, the area has come under immense aggression from the Mizo miscreants, who are well supported by local associations and Mizoram Police.

According to our correspondent, who has been reporting from the spot, there is a total anarchy in the border. The mizo-miscreants have walked in as much as three kilometres and have even set a camp. “They don’t let us point and shoot with our camera. In fact, the officers in Assam are also unable to get any access to the spot,” said our correspondent.

Last night the mizo-miscreants entered the Lailapur area and set a few stalls and houses to fire. Today they flew drones to take stock of the situation and locals feel that they are planning to march ahead. “They have arms and ammunition and they also have the local police supporting them wholeheartedly. On the other hand, our Police, our ministers have left us abandoned,” said a local resident whose stall was burnt yesterday.

“What is more insulting for Assam is that the Mizo miscreants do Facebook Live, abuse the people and administration of Assam to no end on record as they march ahead in Assam’s territory with arms and ammunition. We, the locals of this area feel like handicapped orphans,” added the local who lost his shop.

Dholai MLA Parimal Suklabaidya, who is also the Forest and Environment, Excise and Fishery minister of Assam visited the spot today. After that he shared on his social media account, “Visited Cachar’s Lailapur area along the Assam-Mizoram border today to take stock of the heated situation that arose due to aggressive incidents of violence yesterday & many houses of our state’s people were burnt down as a result of this. An high level enquiry has been ordered under the direction of Cachar SP & DC & we are assuring of a solution to this inter-state border aggression at the earliest. Cachar Police will ensure of a continuous protection to the people of Lailapur & I will be personally monitoring all developments related to this incident.”

The locals, however, said that the minister’s visit was nothing but a photo-op. “He came, asked us to maintain peace and left. What about aggression? What about our shops and houses that got burnt to ashes, what about the land that they have encroached? Today the MLA is not bothered about our plight, but, in the upcoming elections, we will ask these questions,” said a lady who also claims to have lost her house.

When our correspondent reached out to the minister, he said, he won’t like to comment on the issue at this stage.

Mahila Congress president and former Silchar MP Sushmita Dev also went to the spot in the morning. “It is shocking that the Mizoram government which is a friend of BJP and a part of NEDA is sponsoring aggression against Assam. It is not only in Cachar, but the same is happening in Karimganj too. What is astonishing is that the NEDA Convenor Himanta Biswa Sarma and Home Minister Sarbananda Sonowal are still in their slumber,” said Sushmita Dev.

She questioned, when thousands of Mizo-miscreants walked to Assam, what was the state’s intelligence doing? “After houses and shops were burnt, all the Cachar administration did was it sent a circle officer. Why did the DC herself not visit the spot?” questioned Dev.

Cachar DC Keerthi Jalli, however, visited in the evening and reportedly, the Mizoram Police did not allow her access to the disputed-encroached land. The DC and other officers returned to the district headquarters and are currently in a high-level meeting. She was unavailable for comment.

The latest information, as shared by our correspondent, is that the Additional Superintendent of Police Cachar is in the Lailapur area. “There is Police patrolling the area and the situation is stable. We are here to ensure safety for locals. Everything is calm and peaceful,” added the additional superintendent of Police.