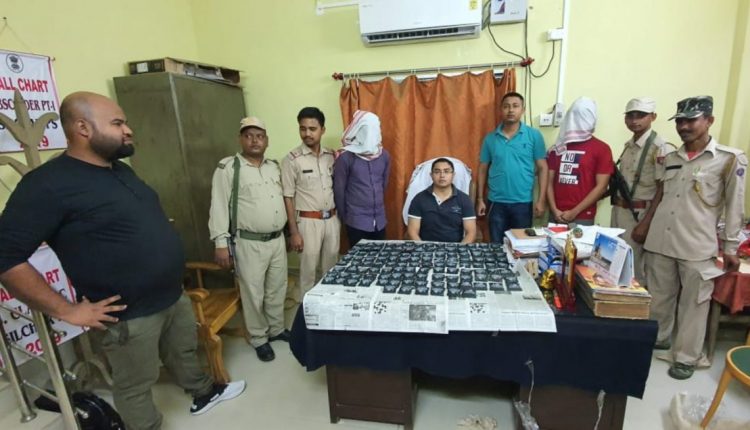 Shocking news coming in from the Bilpar area in Silchar. Based on a secret tip-off DSP, AJ Baruah along with his team conducted a raid in Silchar’s Bilpar area. Following the successful raid, Baruah and team apprehended Kishan Das, a 1st sem student of Lalit Jain College and 28-year-old Raju Das a resident of Dholai area.

As per Police sources, Raju Das was handed over the consignment of WY (What’s Yours) tablets which he kept at Kishan Das’s rented apartment in Bilpar. Kishan Das said he had no clue about what is inside the bags. Allegedly the consignment was shipped from Agartala by Bipul Roy.

Talking about the seizure list, AJ Baruah said, “We have apprehended two individuals with 118 packets of suspected WY tablets each packet containing 200 tablets. As per our estimates, the cost of the 23,600 tablets considering today’s market value would be around Rs 50-60 lakh.” He informed that Both Raju and Kishan Das will be produced in the court tomorrow.

Tablets containing ephedrine and pseudoephedrine are often illegally transported from places like Gujarat and Himachal Pradesh to Manipur and then smuggled to Myanmar. There the tablets are processed in illegal drug factories and the two components are mixed to create WY (What’s Yours) drug. Peddler and dealer in Myanmar then smuggle it back to India and other parts of Southeast Asia. WY is a party drug and popular among party-goers and night-life enthusiasts, it is also consumed by mine workers as that helps them work for longer hours.