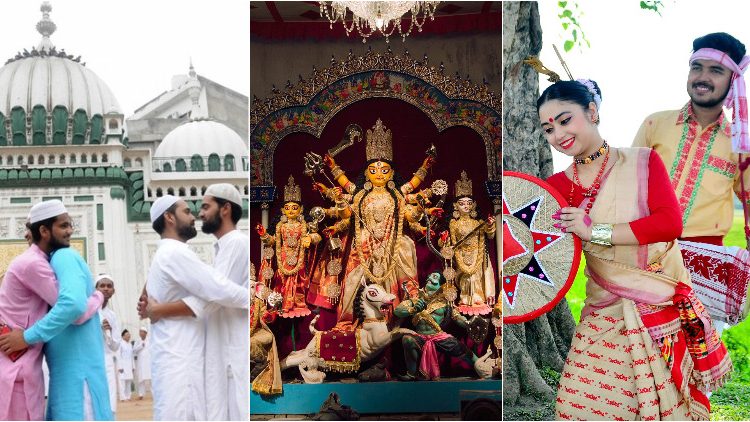 Durga Puja SOP in Cachar: Spread of Coronavirus is not the 'FEAR' but CELEBRATION is

A few days back, if not a terrorist organisation, the antisocial United Liberation Front of Assam (I) issued a press statement. They urged the Assam Government to not permit Durga Puja in the state especially because there was no Bihu. MLA, MP, former MP, they all said ULFA is irrelevant.

Today, when one reads the Standard Operating Procedure rolled out by the Cachar District administration, it looks clear that ULFA and Government actually think alike.

The premise of this SOP is, “When there was no Bihu, no Eid, there shouldn’t be a Durga Puja either.” At a time when the Prime Minister of India says, “Sabka Saath Sabka Vikas” and Chief Minister of Assam vouches for an assimilated Barak-Bramhaputra-Hills where does such premise arise from? Bihu is an occasion celebrated across the State and it is a festival for all the residents of the State and everyone missed it. Just because you missed your breakfast, should you also skip your lunch then?

When ULFA says, “do not allow Durga Puja” it is understandable. To decode it further, let’s just paste what’s written in Wikipedia about a recent ULFA “SOP.”

“On the evening of 1 November 2018, six or seven Bengali Hindu youths were relaxing at a shop and playing ludo in the Kherbari village. Around 8-30 PM IST five or six unidentified gunmen arrived at the spot and rounded up the youths. They were taken to the banks of the Brahmaputra river, about six kilometers from the Dhola-Sadiya bridge. The gunmen forced the youths to sit on a line. At around 8:55 PM IST the gunmen opened fire on the youths from a point blank range. Five out of the seven people died on the spot. The two critically injured survivors were rushed to the hospital.” This was done with the Citizenship Amendment Act in the backdrop. If they would not ask for a prohibition on Durga Puja who would?

Let’s try and make sense of the SOP issued by Cachar district administration. But, before that, it is important to note, the chief secretary of Assam said it was on the deputy commissioners to decide the the regulations for Puja celebration. The local MPs and MLAs said they had no clue about the SOP. In fact, the ruling party BJP, submitted a list of suggestions to the district administration only after the SOP was issued. Sources in the administration said, the SOP has been chalked out in coordination with the members of respective Durga Puja Committees. The MPs and MLAs were also invited to attend the meeting, but they apparently skipped it.

Now, let’s dive into the SOP.

1. Idol puja celebration will only be allowed in places where the puja committee has permanent concrete staphit mandir or mandop. Temporary constructed puja pandals will not be allowed.

2. Puja committees are allowed to open the mandaps/mandir at 5.00 a.m in the morning and are requested to shut down (with barricades) by 10 p.m starting from Panchami to Navami.

These are two guidelines with respect to where the Pujas can take place. The basic question here is if you want places to be less crowded shouldn’t you have more places organising Puja? Won’t you let the Puja pandals open for a longer period of time? What can logically explain the 10 PM deadline? Most of Silchar starts pandal hopping at 10 pm after completing their daily work. How are makeshift Puja Pandals remotely connected to Coronavirus, what could possibly go wrong inside a makeshift-temporary Puja pandal that can’t go wrong in a concrete building? When did cement become a Corona-prevention tool?

By imposing the 10 pm deadline and reducing the number of pandals the administration is not only curtailing Durga Puja but it is also posing threat to life. Let’s draw a reference from what happened in the past. Hazrat Nizamuddin Markaz was considered to be a viral vector for a long period of time in the early days of the Pandemic. What was the issue? People from all over the world congregated at one place and then moved back to their respective places carrying the infection. If Pujas are performed in every bylane, it is likely that the concrete temples which are few and far would have less crowd.

Now the guidelines about Idol preparation

1. Durga idols will only be allowed up to a size of 5 feet. Idols beyond this height will not be permitted.
2. Durga puja idol should all together (5 deities) be in a single frame (Ek-katham) and not in separate form.
3. For carrying of idols for puja only a group of 5 (five) persons will be allowed following all COVID protocols.

20 days before the Durga Puja, the administration decides to put a cap on the size of the idol. From Silcoorie to Panpatty, idol-makers everywhere are having a hard time as none of the idols got delivered during Basanti Puja in April (It is not just Bihu and Eid that we missed). They were planning to get those off the shelves as there is a cost of stocking too. But now, with this SOP, they are clueless, as the SOP does not mention if the legs must be chopped or head should be shortened. Yet, one could logically explain that because no more than five are allowed for immersion, the idols are supposed to be smaller.

That argument falls flat when the administration says all five deities should be in a single frame (Ek-Katham). Is it easier to lift five idols separately or all at one go? Much like the entire SOP, this “one frame” clause makes no sense either.

The SOP prohibits the usage of speakers and bans cultural events. What is the link between loudspeakers and the spread of Coronavirus? The SOP allows a Dhaki to play Dhak in the concrete pandals but a singer cannot stand in the place of a Dhaki and sing a devotional song while playing harmonium, where is the logic? The sound emitted by the Dhak is immune to Corona but that of a guitar is prone to the outbreak?

The SOP restricts the movement of two-wheelers. World over, small size private transport is encouraged to de-crowd public transport. During Durga Puja in Cachar, two-wheelers are restricted. By connecting the dots in this SOP, one can draw the conclusion that this SOP does not have a logical explanation.

There is no denying that the administration needs to impose certain restrictions to ensure there is no spike in the positivity rate. After all, it is the administration that fought hard and round the clock to control the spread of the virus. But the motive should be clear and guidelines should support it.

Not only local sentiments, but the guidelines also contradict Government of India’s stand on so many aspects. Prime Minister said it is time to focus on the local economy and be self-dependent (Atmanirbhar). The labours who make pandals are locals and they procure materials from local markets, so, why prohibit them? The sound and light industry is going through a tough time, what is the problem if they earn some money by renting their speakers and lights.

One of the guidelines says, “The Puja Committee will not allow any vendor, temporary tea stalls /chat house etc in the vicinity of the Puja Pandal.” This is in direct contradiction to the concept of vocal for local. Also, it is another move to crowd restaurants in the town. If someone living in Shivalik Park wants to eat a plate of Chat, he or she cannot do it near a temple but can drive all the way to an expensive eatery and do so.

One might argue, that in the time of a pandemic, we should stick to necessity and not think about luxury. Basically, eat only Dal Rice at home and not think about Biriyani. A wise man once said, “We cannot live only for ourselves. A thousand fibers connect us with our fellow men.”

When one goes and eats a plate of Biriyani in an expensive restaurant, the dishwasher there earns his Dal Rice. You stop luxury, you take away someone’s necessity.

This SOP is less of a shield to protect the general public from the disease and more of a restriction to celebrations. When 7.2 crore voters can celebrate democracy in Bihar and politicians can celebrate fandom by having thousands in their rallies, what is the threat that Durga Puja imposes in Cachar? We are in Unlock 5 where Cinemas are allowed to open and Entertainment Parks will sell tickets, why is Cachar District Administration contradicting everything for scoring brownie points and most importantly, if not local MPs and MLAs, who are advising the district administration?

This is not just an SOP to curtail Puja Celebration or restrict the outbreak of the virus, with the Clause 6 of the Assam Accord on the backdrop, this could be the beginning of a new era in Assam’s history where how we worship and whom, and in what scale is determined by diktats.

Play "Mahua" has the potential to scale new heights