In a notice issued by the Assam University recently, it notified all colleges under it to file forms for examination of various back paper, practical paper and arrear paper. It also stated that the exam fee for the back paper would be Rs 200.

Ignoring the notice, Gurucharan College asked for Rs 675 per paper from the students. After many meetings between the students of the college and its faculty, the fees were reduced to Rs 375 for honours paper and Rs 300 for a pass and Rs 75 per arrear. 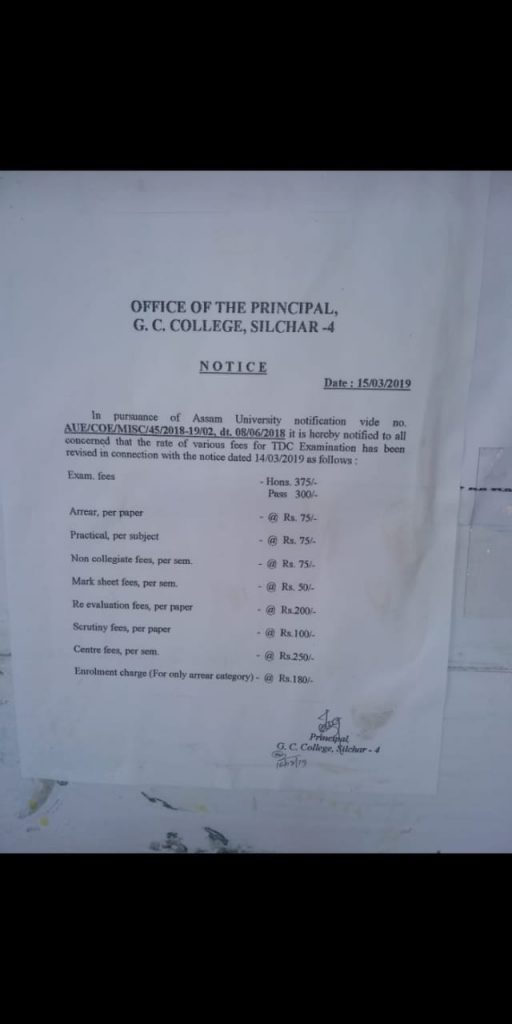 But the students stood ground and demanded the college follows the notice issued by the university. In this demand, the students of 2nd and 3rd year of GC College gathered in the morning around the main gate of the college.

They restricted the entry of the Vice Principal who went back without giving any confrontation to the protestors. But that did not happen with the college principal. After much deliberation between both the administration and the students, they opened the way for the principal to enter.

After an emergency meeting between the administrative staffs, the college decided to reduce the fees and bring it down to the fees as notified by the university. The protesters finally stopped after almost two hours.

“Such behaviour by colleges will never be accepted by students and we will voice against injustice. After all, students’ power is nation’s power,” said a student protesting against the hike of fees.

It has also been brought to notice through social media that not just GC but other colleges including Cachar College, SS College Hailakandi, Women’s College have also charged arrear paper fees according to its own wish and have not abided the Assam University guidelines.

Renovation work in new Sadarghat bridge; “Issue only in the approach, bridge is fine”: says contractor

Traffic congestion: Proposal of a New road from Normal School to Chirukandi

"Historians failed to do justice with Barak Valley's…