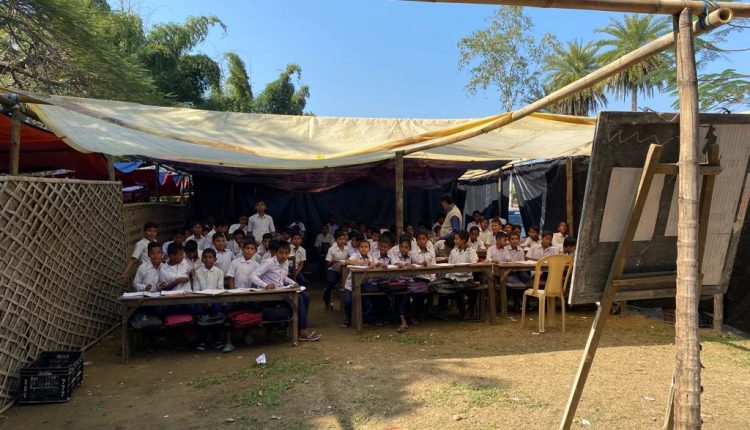 Article 21 of the Indian Constitution “No person shall be deprived of his life or personal liberty except according to a procedure established by law.” Thus, article 21 secures two rights – right to life and right to personal liberty. Then came the Eighty-sixth Amendment, and Article 21 (A) was added to the constitution.

Article 21 (A) states. “The State shall provide free and compulsory education to all children of the age of six to fourteen years in such manner as the State may, by law, determine.” What followed ’21 A’ is the coveted The Right of Children to Free and Compulsory Education Act or Right to Education Act (RTE). It is an Act of the Parliament of India enacted on 4 August 2009, which describes the modalities of the importance of free and compulsory education for children between 6 and 14 in India under Article 21A of the Indian Constitution. India became one of 135 countries to make education a fundamental right of every child when the Act came into force on 1 April 2010.

Now that it is established that education is a fundamental right in the largest democracy of the world, let’s dive deep into the education scenario in Cachar district’s Dholai Legislative Assembly constituency. On November 25, chief minister of Assam Dr. Himanta Biswa Sarma posed for a picture where he is felicitating his counterparts from Mizoram, Zoramthanga. This was the first public picture of the duo after the barbaric killing of six Assam Police personnel on July 26 within the territory of Assam. Mizo-forces had launched a blitzkrieg that claimed six lives and around 43 were hospitalized, all from Assam. It was a clash between the two states over an interstate border dispute. “Happy to share that Hon Chief Minister, Mizoram, Sri Zoramthanga accepted my dinner invite at Assam House, Delhi. We had a nice dinner and a lively evening. It’s always so heartening to have his gracious company,” shared the chief minister of Assam. 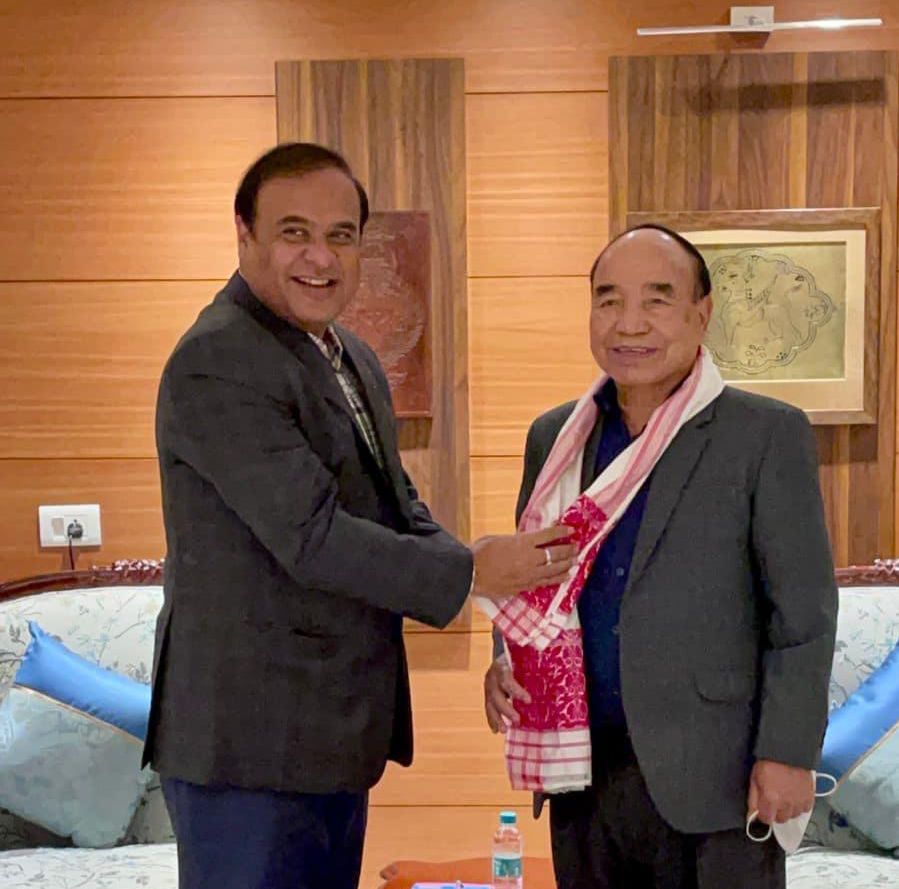 The image with both the chief ministers smiling and sharing a cordial relationship sends across a positive message. The pictures hint towards the restoration of normalcy. However that is not the ground reality. In the Dholai area, at least seven lower primary schools have suspended classroom education as the schools remained occupied by state and central forces. Then there are two high schools with around three thousand students. These two schools are the backbone of education in the region as it lacks private schools and most parents rely on public facilities for students. Bam Bidyapith High School in Bagha was established in 1950 and has 1819 students enrolled, 367 of them are supposed to take the matriculation test in 2021-22 session. Similarly, Hawaithang High School located in the same neighbourhood has 856 students. Both the schools have most of their classrooms occupied by forces and many of the students are opting out of education due to this.

Headmaster of Hawaithang High School, Hemendra Singh says that the students come from families that do not care or value education. “They only study when they are in school. In November, most schools in Cachar district resumed classroom education, but we could not as the forces remain stationed even today,” asserts Singh. He has converted the headmaster’s room as a makeshift common room and in the common room, desks and benches have been placed to make room for students studying in standard X and IX. In shifts, these students are called in and classroom education is offered. 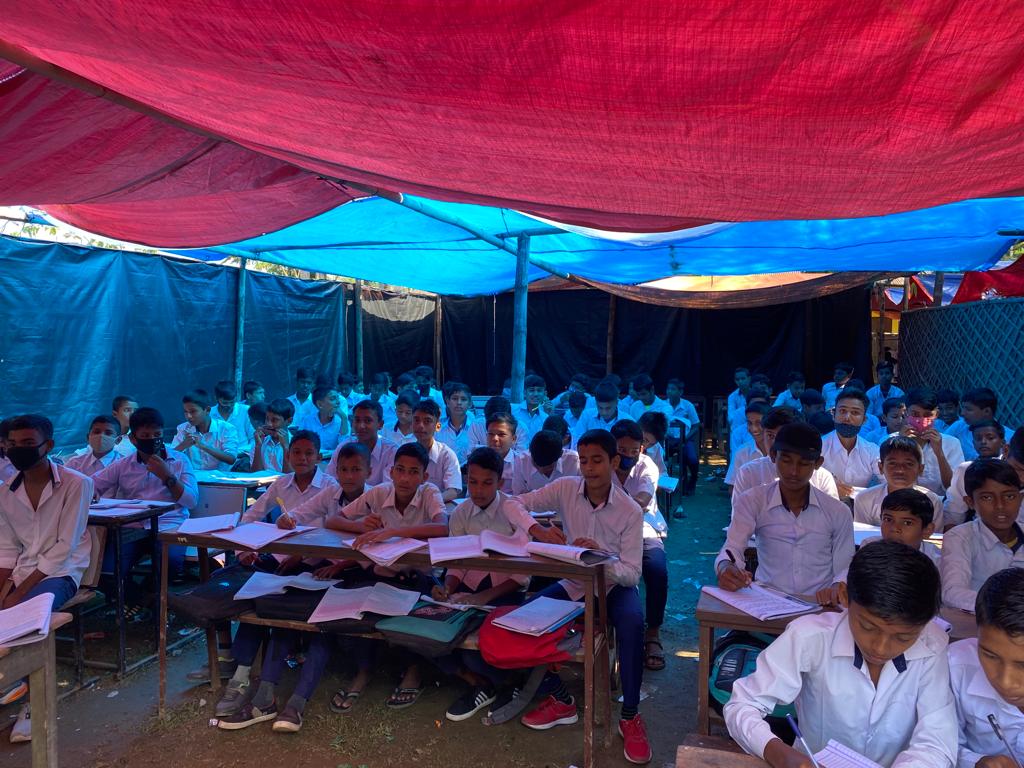 127 students from the school will appear for the matriculation test next year. “Their results are our responsibility. If the result of the school is not up to the mark, no one will consider the circumstances and so, despite all the hurdles, we are taking initiatives in personal capacity to ensure that the students are getting some assistance,” Singh adds.

Talking about personal capacity, Samsul Haque Barbhuiya, the headmaster in charge of the Bam Bidyapith has set up a classroom within his own house. He has won the ‘Excellent Teacher’ award in the past as the school secures quality results every year. In fact, between 2006 and 2012, the school has set the benchmarks by securing a 100% pass percentage. Currently, education is paralysed in the school of such repute and high importance. 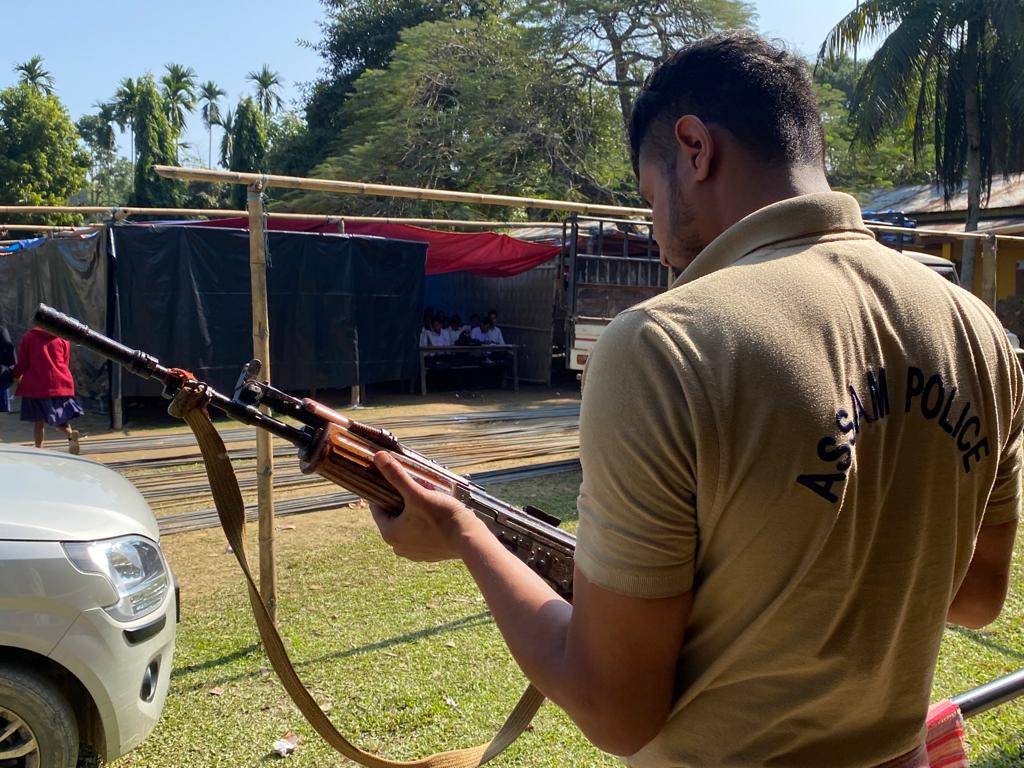 The school has 13 halls in total and 22 IR Battalion forces have occupied 11 of them. Since the teachers could not provide space in the classrooms, they invested from their pockets and build makeshift classrooms without light or fans. “It is not the environment that our forces or students deserve. Both deserve better, but there is no option and so we started taking classes from these makeshift classrooms,” says Barbhuiya.

The co-education school has girls and boys between 10 and 16 years. “The environment that they are in is not cordial for classroom education,” says Barbhuiya. The young kids walk into the classrooms every day staring at men standing with guns. They see that their classrooms are occupied and not many can say much about all this. Just next to the toilet inside the school premises, there are hundreds of empty liquor bottles only making the kids curious about what was inside it. So, the next time politicians of the two states are shaking hands, the future of these kids should be their utmost talking point. 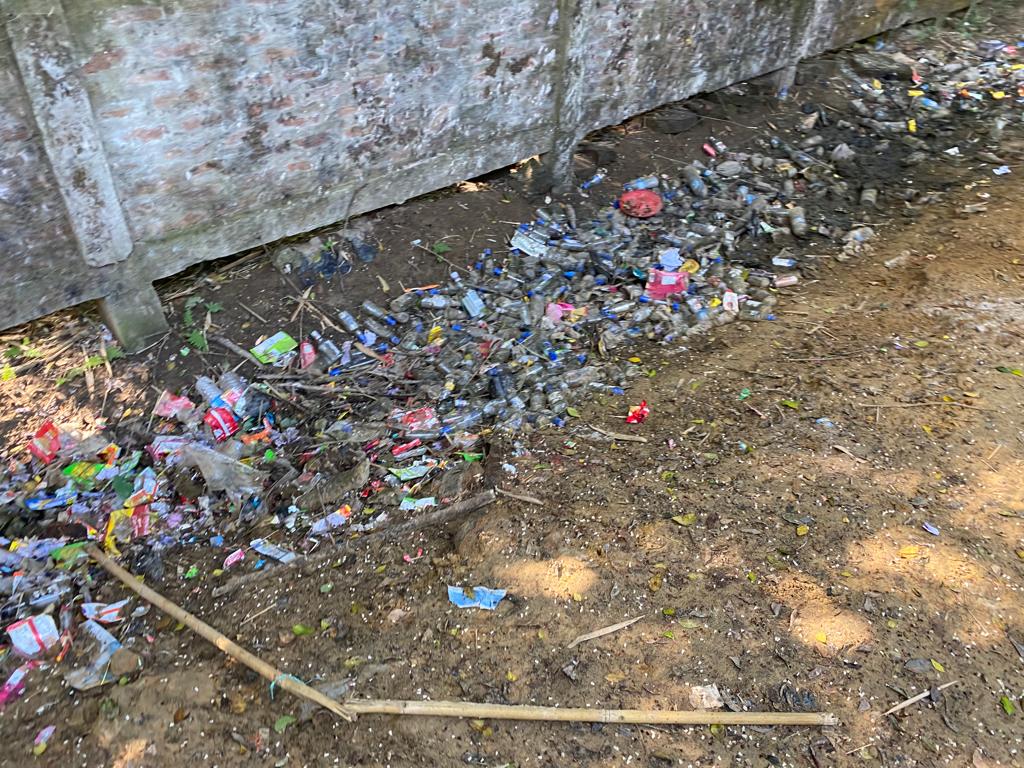 It also seems education was never a priority for the authority. Headmaster Barbhuiya informs that there is one post each for teachers to teach Persian, Sanskrit and both are vacant. There are two posts for Manipuri and Assamese teachers and all are vacant. Five Assistant teachers, two Science graduate teachers, one headmaster and one assistant headmaster post are also vacant. “Because this school is located in a remote location, we don’t get teachers,” Headmaster in charge Barbhuiya shares his sorrow. Well, this is not only in rural areas, but there is also a scarcity of teachers in the heart of the town too. Government Girls HS School has one teacher teaching 300 students in the Arts stream.

Both the headmasters said that they have informed, Semina Yasmin Ara Rahman, Inspector of Schools Cachar about the scenario and requested her to take action. The Inspector of Schools, simply responded by saying that it is the deputy commissioner’s purview and there is very little that she could do. Headmaster Hemendra Singh and headmaster in charge Samsul Haque Barbhuiya said that after discussing the matter, they informed the local MLA, Parimal Suklabaidya who is also a minister in Himanta Biswa Sarma’s cabinet. They are yet to get a positive response from any corner.

In the early 2000s, between programmes and especially news bulletins on Doordarshan, an ad film aired. Clad in school uniform, some kids riding on a camel while others running used to sing, “Roke Se Na Ruke Hum, Marzi Sa Chale hum, Baadal Sa Garje Hum, Saavan Sa Barse Hum, Sooraj Sa Chamke Hum — School Chalein Hum”. Written by Mehboob, composed by Shankar-Ehsaan-Loy, it was an ad to promote Prime Minister of India Atal Bihari Vajpayee’s ‘Sarva Shiksha Abhiyan’ (Education for All Movement). Cut to 2021, men with guns stand at the gate of schools and classes remain suspended. Vajpayee is gone and so has his ideals.

Meet Silchar's Suprotik Roy who paid tribute to Netaji with 126 sketches: "It's a…