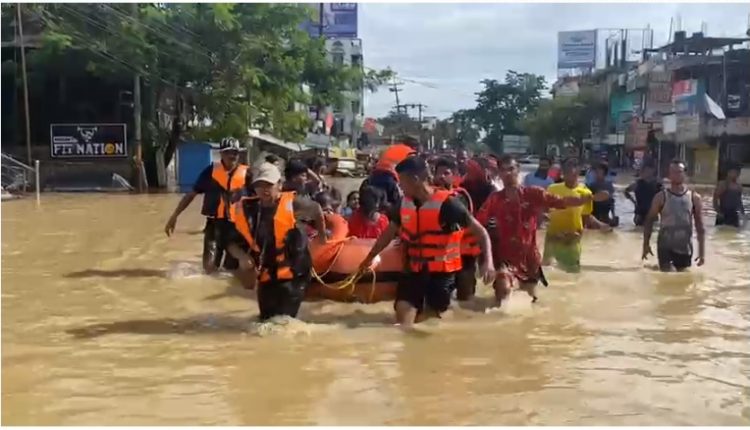 In the picture you see ACS Nabanita Hazarika pulling the lifeboat through the deluge in front of Public School Road. The current of the flowing water is such that it is practically impossible to stand on feet without holding the rope. You either float or flow away!

Another official was seen moving here and there with relief items. The relief distribution has its own problem and that will be elaborately explained in the next story, but he is least responsible for the same.

Today, in Silchar’s Bilpar area, where Silchar MP, Dr. Rajdeep Roy has his residence, the officials of Cachar District Administration guided the NDRF officials for distribution of relief items. They were distributing pack of bread, one small pack of Amul Taaza milk, banana and other essentials per head. As they went inside Bilpar, they were obstructed and questioned by the locals.

The locals are irked and they have run out of patience. The questions only spoke about their frustration. They feel nobody cares for them. They feel, they were abandoned. They feel, their plight got ignored and they were left to die. They wanted shoulders to vent, they had expectations. What they feel is not wrong. The moment they saw the official from deputy commissioner’s office, they had an outburst.

Near MP’s house, the official was held by his collar, manhandled and the mob almost had him in their mercy. Why was it just an official from the DC Office and not an elected representative or representative of the opposition? The political class is very much aware of the ground realty, they know they will face the wrath of the public and so, they have abandoned the officials, like they have been doing each time there is a conflict.

But why are they not thinking about the long-term impact of this behaviour? The answer is simple, they have the religion trump card in their sleeves and so, they will play it and like we forgot COVID woes, like we forgot the death of six police personnel in Lailapur, we will forget this too. At the end of the day, we are getting all we deserve.

So what is so special about Nabanita Hazarika pulling a lifeboat to rescue the stranded in deluge? When no one is meeting expectation by doing the job they are supposed to, someone doing just that becomes special!!!