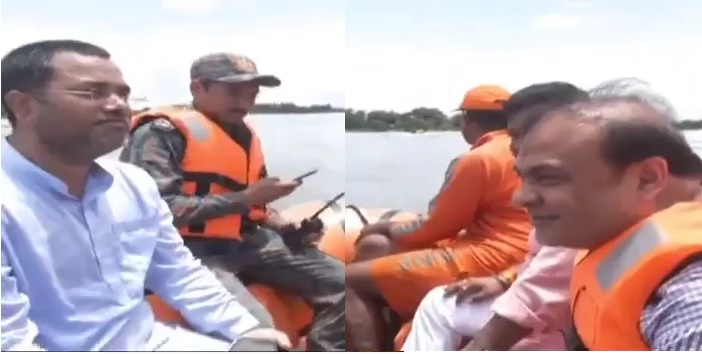 According to Google trends, the word “Khong” was most searched in the month of June in the last one year. It was 100 times (the maximum that Google captures) more than in May. What happened? The most influential man of Northeast, Chief Minister of Assam, said “Eman Khong” and that got captured in his Facebook Live. “Eman Khong” translates to “So Much Angst”.

MLA of Patherkandi Krishnendu Paul, popularly recognised as a “close-one” of Himanta Biswa Sarma, was heard saying in the same video, “Silchar’s leaders did not work during the floods” (In Assamese) and in response, the CM said, “So much angst against them, what went wrong?” Another Minister, Jayanta Mallah Baruah parked in Silchar to look after the flood situation, responded to CM’s question, “They clicked photos from their home and shared them on Facebook. Some were posting pictures of meeting at the Deputy Commissioner’s Office, the general public did not like it as they expected the elected representatives to be on the ground.”

Now, all of them were sailing on a life boat in the middle of Son Beel’s gigantic wetland, and probably didn’t know that the journey was getting live-streamed. Another possibility is that they very much knew about the live-streaming and so Paul mentioned it to fuel the fire in Silchar. Whatever it was, millions watched it, shared it, downloaded and reposted it. So this explains the search for the word “Khong” shooting up. People were searching it in Delhi, Bangalore and many other parts of the country.

It became a viral story. The protagonist of that fiasco that exposed many infighting in BJP’s politics, Patherkandi MLA, Krishnendu Paul was interviewed by Barak Bulletin. He tried to dodge, but Barak Bulletin’s correspondent persisted with the line of questioning and here are the edited excerpts of the conversation:

Your conversation with the Chief Minister when he was on a visit to flood-hit Son Beel has created a massive controversy.

I think this was an unnecessary debate. The line of talk was completely different. People misunderstood it.

Look, we were discussing the overall political activities that revolved around Silchar at that time. There were leaders from Congress, Trinamool, AIUDF, etc. parties. Sushmita Dev speaks tall, but she was totally absent on the ground. Congress was just sitting idle. But, they got a good number of votes in the previous elections.

No, you are just dodging the question by changing the goalpost. You have already said the discussion was an overall one. Then, how could the BJP leaders be kept out of it?

(A little pause…) I cannot totally disagree with your point. Our party Karyakartas, RSS, and Bajrang dal workers have really worked well, but from a few corners more magnified effort in that deluge was expected by the citizens. Maybe due to that some sort of dissatisfaction germinated. But at the same time, you cannot let the opposition go. They should be asked tough questions.

Opposition leaders will say they are out of power. It was the ruling party’s primary duty to provide relief to the people.

This is a lame excuse. So many NGOs and individuals have extended great support to the flood-hit citizens of Silchar. From the rest two districts of the valley – Karimganj, and Hailakandi a good number of individuals went to Silchar on their own and helped the stranded people. Have you seen the opposition leaders of Cachar doing the same? The answer is a big no.

But, your party colleagues from Cachar are upset with you.

Not at all. This is absolutely false information.

Did you have any conversation with Dr. Rajdeep Roy the Silchar MP, or MLA of Silchar recently, especially after the Khong Episode?

No, I did not. I was occupied with some work and went to Dispur. They might have been busy dealing with the aftermath.

How is the flood situation now at Karimganj?

Though many people are still at the relief camps, water is receding fast from low-lying areas of the district. I hope within a week, Karimganj might become completely flood-free.

There were allegations of insufficient relief distribution at different camps. Do you think the district administration had lapses?

I have seen many floods. I must say that the current deputy commissioner of Karimganj is a very active person. He personally visited all the sensitive dykes and ensured that no breaches occurred during the flood. The administration took all necessary steps for proper relief material distribution at different camps. But, at the time of such a sweeping disaster, there may be some complaints. It is quite natural.

The Karimganj town has a major problem with waterlogging.

I agree. This has created major trouble for the citizens. I had a talk with the new municipal board regarding this. The drainage system of the town may need a revamp. They are working on it.

There was wide-scale speculation about you becoming the minister before this recent cabinet expansion.

I never heard or thought anything about that. I truly believe that whether I get a cabinet berth or not, development has no connection with that. Barak Valley earlier had three ministers in the Congress regime, but did we witness any development? The 50 km stretch between Karimganj and Silchar used to take nearly three hours to travel. But, look at the current situation. It hardly needs an hour to pass this distance now.

You spoke about some of your dreams about Patharkandi before the assembly election.

Yes, I remember. I have a dream about Patharkandi emerging as an education hub in this valley. The process has already started. My constituency now has two colleges including an Adarsh Mahavidyalaya. We have a science stream there. I am planning to start a model school with a CBSE affiliation. I have spoken with Honurable CM Sir regarding this. He has already given his nod. Moreover, an agricultural university will also be set up at Patharkandi. We are also making efforts on imparting quality education to the government schools there.

Apart from that, I have given much stress on surface communication and the health sector. The roads in my constituency are one of the best in Barak Valley. I invite my journalist friends to visit the area and conduct an in-depth analysis of how the roads of greater Patharkandi have improved immensely during my tenure.

All responsibilities of this published interview rests with Anirban Roy Choudhury