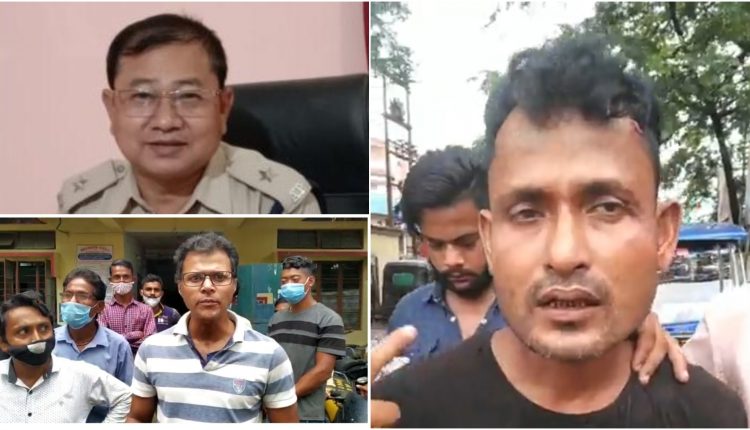 At Karimganj’s Subhash Nagar Road, a man was nabbed by the general public earlier today. According to the locals, a man who identified himself as Raj Nath Bhowmik has looted lakhs of cash from people by promising jobs. He has also married multiple times and has in-laws in different cities. As a part of his plan, he never takes his wives to his house, instead keeps them at their paternal residence. One of the fathers-in-law who understood that the man is a scamster informed the locals today and he was nabbed.

A Karimganj resident Madhumita Kar had gone to an astrologer three years back and that is when she met Raj Nath Bhowmik. There they got introduced and the family members of Kar say that he somehow brainwashed her to marry him. They are married and have a daughter. Family members of Kar say that recently he revealed that he has another wife in Silchar and three children with her. The wife is alive. Family members have alleged that not only two, but he has many other wives and children.

While his relationship with the people of Karimganj started three years back with the marriage with Madhumita Kar, he has allegedly looted many other people in the locality. Locals have alleged that he has claimed to be an Army Officer and promised jobs in return for cash. “One man handed over a gold chain and cash to him for a job for his sister. There are people from who he took Rs 2 lakh, Rs 3 lakh promising permanent jobs in Defence. He has looted the poorest of the poor too by promising them jobs as drivers, cleaners. According to our estimate, he has looted around Rs 50 lakh from the people and it could be higher,” said a local resident who took him to the Karimganj Police Station.

Around 15 local residents went to Madhumita Kar’s resident today morning at around 5:00 am. Two of them entered the house and started talking to him normally. “But he avoided the conversation and tried to run away from the spot. That is when the locals chased him and caught him,” added a man who accompanied him to the Police station. He was beaten by the public as was bleeding when he was handed over to Karimganj Sadar Police Station.

OC of Karimganj Sadar Police Station, Sanjib Terang said, “The public handed over a man to us today morning. We are investigating the matter and interrogating him. He has introduced himself as Raj Nath Bhowmik but we are yet to ascertain if this is his real name.”