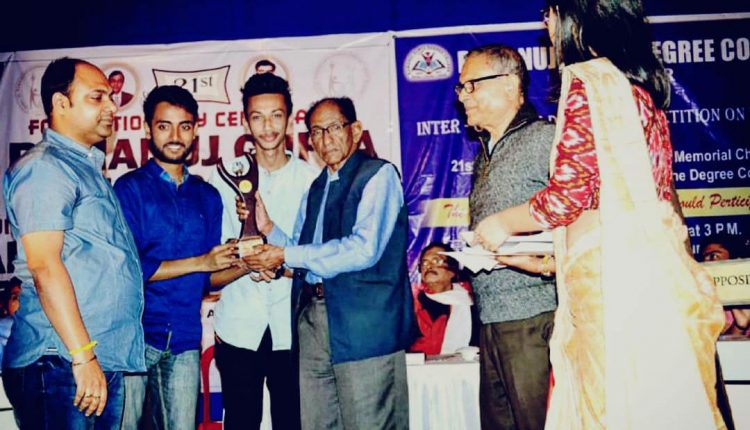 Fall of a Titan - A eulogy to Professor Partha Chanda

– these lines from Sukanta Bhattacharya’s ‘Charpatro’ best encapsulates what Partho Chanda Sir has bequeathed to almost three generations of debaters, thinkers and dissenters of our valley.

Around six years ago, the District Police Administration had organised a speech competition at Silchar. That was when I first met Professor Partha Chanda . ” Are you a relative of Kamalendu Bhattacharjee? ” – asked a curious Partha Sir after the conclusion of the prize distribution ceremony. Since I wasn’t remotely related to the former parliamentarian, I was taken aback by the question. ” No Sir, I am not related to Kamalendu Bhattacharjee ” . To which, he said, “Are you sure, son?”. “I am absolutely sure, sir”, I said. “Then you are an outlier. Keep in touch” – thus began my acquaintance with one of the most amiable, interesting and witty persons that I have ever known.

I am reminiscent of a debate organised by Ramanuj Gupta Junior College on the motion of ” Student Politics must be banned in campuses ” . Dr. Rajdeep Roy and Professor Partha Chanda were invited as the guest speakers – the former speaking as the leader of the opposition and the latter donning the hat of the leader of the treasury. True to my genuine conviction, I was speaking against the motion .Professor Joydeep Biswas, another towering thinker, writer and debater of our valley, was among the judges of the competition. Kamalendu Bhattacharjee, former Parliamentarian, was the Speaker of the Debate. Partha Sir, I believe, was at his supreme best when he was asked to defend the indefensible. With all his persuasive skills and unthinkable circuitous logic, he mounted an extraordinary defense for the treasury bench. Drawing from the Ashrama System of Hindu Philosophy to the ‘Purusarthos’ of an ideal life to the ideological excesses in many Indian campuses, Partho Sir was playing the finest ‘ Devil’s Advocate ‘ that one can ever think of. We couldn’t help but marvel at the prowess of this gentleman’s oratory skills. His deliberations were imbued with a sense of calm, searing brevity and enviable wit. His speeches were bereft of pedantic jargons and didactic sermons. ” Killing me softly ” – was how many of us felt when he sat across the aisle.

Memories of one of the finest engagements with Partho Sir doesn’t escape me. It was a North East level debate organised by Jyoti Foundation.Mr.Ravi Patwa, one of the most successful chartered accountants of the North East and a prolific speaker himself, was at the forefront of organising the debate. If memory doesn’t betray me, Professor Apratim Nag was one of the judges of the competition.
At the first round of the debate, the motion was ” Media is responsible for increasing intolerance in the country ” . Partho Sir’s political convictions required him to speak against the motion , so I thought . I spoke for the motion, as passionately as I possibly could, at times referring directly to his arguments . I had a premonition that Partho Sir would have something to tell me later. ” Did I transgress a certain unspoken boundary ?”, I was thinking to myself. ” Did I unknowingly efface the reverence and respect that I genuinely had for him? “- I was anxious.
After the conclusion of the debate, he signalled me towards him. For the sake of avoiding temptations of engaging in self reflexive egotism, I will keep to myself what he exactly said. Let me say that Partho Sir had his genuine political convictions but he never became captivated by it. Partha Sir ‘ s politics was a politics of accommodation – his beliefs were open to rebuttal, his convictions had a reception for dissent , his arguments were never acrid, his commitments were prone to rebuffing. Professor Partho Chanda was, if I may borrow a phrase from Amartya Sen’s magisterial work, an ” Argumentative Indian ” .
I remained in touch with him. Whenever I fared well in any noteworthy debate, I called him up and sought his blessings. ” And what did you exactly say? ” – he would listen as he always did. I cannot help but recount the question he often asked me, ” But do you actually believe what you said? “. ” Yes, Sir”, I would invariably say, ” I believe exactly what I said ” . ” Tore loiya ar para gelo na( you are beyond redemption) “, he would laugh it off.

My last memory of Partha Sir was at a debate organised by Assam University. I was not a participant.
” Chorcha choler to ? ( Are you nurturing yourself?), were his last words.

His demise leaves behind a huge void in the intellectual milieu of our valley .One can imagine that his dream must have been to see Barak Valley swarming with fearless debaters, avid readers and thinkers.
” A debating society is a growing society” – he used to say. There can be no better celebration of his legacy than to rejuvenate the culture of debating in our valley.
“Meek young men grow up in libraries believing it their duty to accept the views which Cicero, which Locke, which Bacon have given, forgetful that Cicero, Locke and Bacon were only young men in libraries when they wrote those books” – quoting Emerson, I once began a debate. ” I hope you understood what you said today .You must always remember this ” – was the best advise I have had from Partho Sir. May all the debaters of this valley be inspired by the legacy he has bequeathed upon all of us.

Somewhere heavens above, I imagine, Partho Sir, in his usual nonchalance , saying –
” Mr. Omnipotent Speaker, I object to your decision of calling me up so early” .