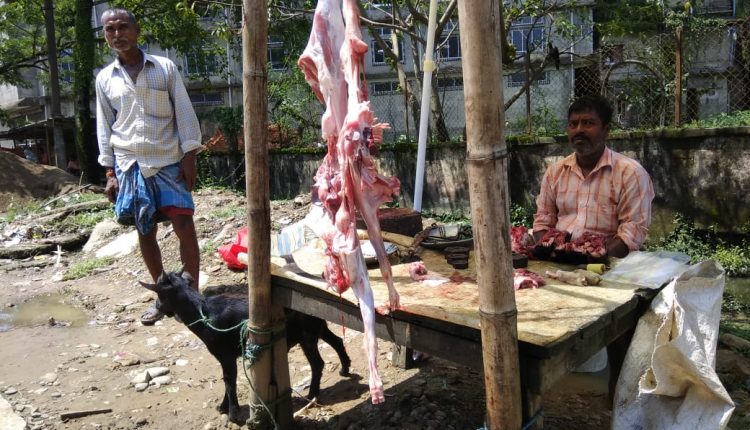 Another goat skinned and hanged, Ajit (name changed), a butcher from the Sonai Road region of Silchar waits patiently for his next customer at the roadside stall he had set up early this Sunday morning.

Bits of carcasses and blood spilled all over the place, Ajit claims that despite not being legally permitted to, he has been selling meat at the same spot for the last 6 to 7 years. “I have never been questioned by the authority”, says Ajit whose stall sits unhindered barely a hundred meters away from the Rangirkhari Police Town Outpost.

“On Sundays, this happens almost everywhere”, says the officer-in-charge at the Rangirkhari Police Town Outpost. “Meat-vendors come here just once in a week and we are yet to receive a complaint from anybody. People make their purchases and leave. No one seems to be bothered about it”, he says.

Silchar, the second biggest city in Assam, is not new to the issue of poor hygiene. On weekends especially, meat and fish vendors set up illegal roadside-stalls at various parts of the city leaving behind piles of carcasses.

Here lies a great danger of animal diseases being transmitted to live animals and then on to people. Flies and maggots that congregate on these carcasses contribute to spreading of infections and diseases. Also, bacteria, when retained in soil or in the air for a long time, can become an unknown source to different diseases later on. 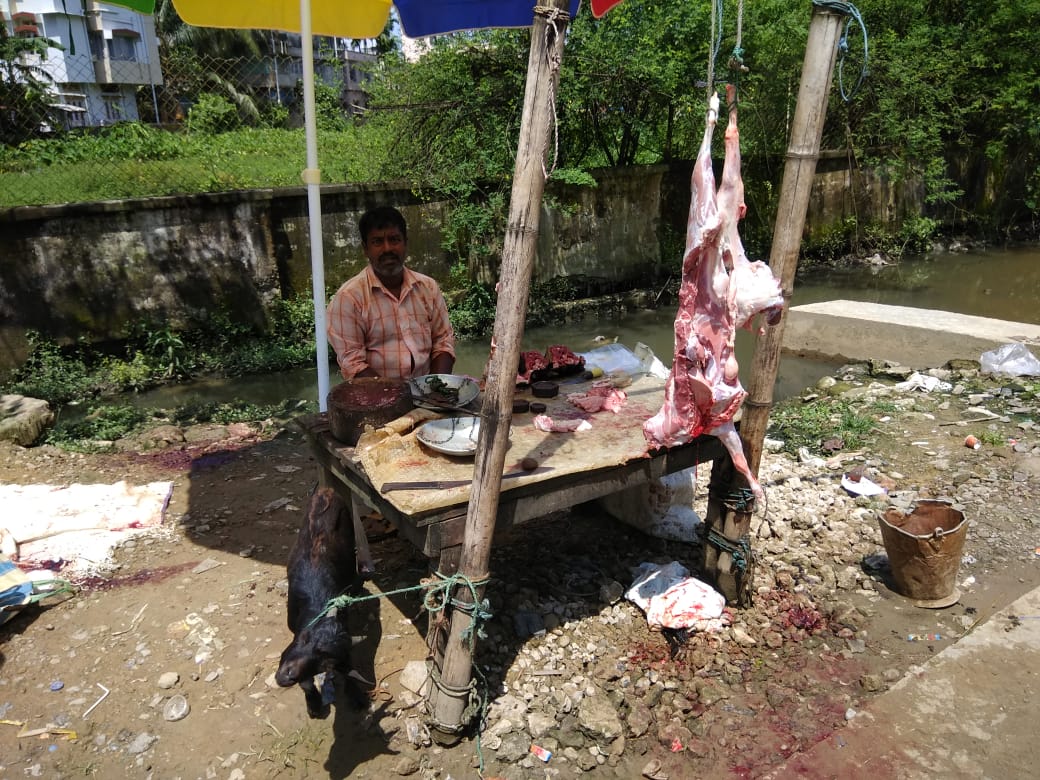 Acute Diarrhea Disease (A.D.D.) is one of many such diseases which may be sourced from flies and insects that contaminate food from such carcasses. As per data collected from Silchar Civil Hospital, there has been a great upsurge in incidences of A.D.D. over the last few years. From a total of 7,098 cases of A.D.D. in the year 2011, there has been a significant rise of around 3,000 patients every passing year and as per the records, 2016 has seen a total of 22,040 such cases in the Cachar district.

Also read: 5 Reasons Why Silchar Is Getting Dirtier And Becoming A Bed Full For Diseases

The story of Silchar’s woeful state of hygiene does not end here; roads here have for long been the unofficial dumping ground of everyday household wastes. Scenes outside community marriage halls with leftover food-plates and at Central Road – Nazirpatty point (Nahata Point) speak the same story. The busy market places of Fatak Bazar and National Highway Bazar are no different.

Cachar district’s urban health officer, Tanveer Ahmed shuns away from being held accountable by saying, “People need to alter their mindsets first. We make sure we remove the garbage and we do sprinkle bleaching powder regularly.”

Ahmed’s claim was, however, countered by a certain Sandeep Acharjee, a teacher and a local who says, “The work is undone almost every single day. Stray dogs, cows and crows hover over the garbage looking for traces of food. The sights of which can disgust any normal human being”.

“Our taxes have been hiked and we have been paying them ceremoniously all the time but it hurts to see very little progress being made with the filth situation in the city”, Sandeep complains.

In another interaction, Chameli Paul, vice-chairperson of the Silchar Municipal Board cites ‘dearth of space within the city’ as one of the reasons why butchers couldn’t be repositioned into a proper marketplace. “They prefer selling meat by the roadside because otherwise, they wouldn’t be able to do business. The police should also help us out in this ordeal”, she says.

Paul claims that sewage disposal has bettered over the last couple of years. “The newly introduced door-to-door sewage collection has helped us in keeping the city clean.” She further clarifies that NGOs, that have been given the responsibility of collecting sewages, often dump them by the roadside instead of the municipality allotted sewage-trolleys. “People often blame the municipality for this reason when actually these NGOs are the ones to be blamed”, she adds.

It may be noted that Silchar’s cleanliness ranking dropped from 280th position in 2017 to 433rd position in 2018 in the recently conducted Swachh Survekshan 2018 drive directed by the Govt. of India. Other cities from the state such as Dibrugarh and Nagaon have ranked way above at 360th and 387th positions, respectively. How well and how quickly can Silchar recover from such a slump only remains to be seen. 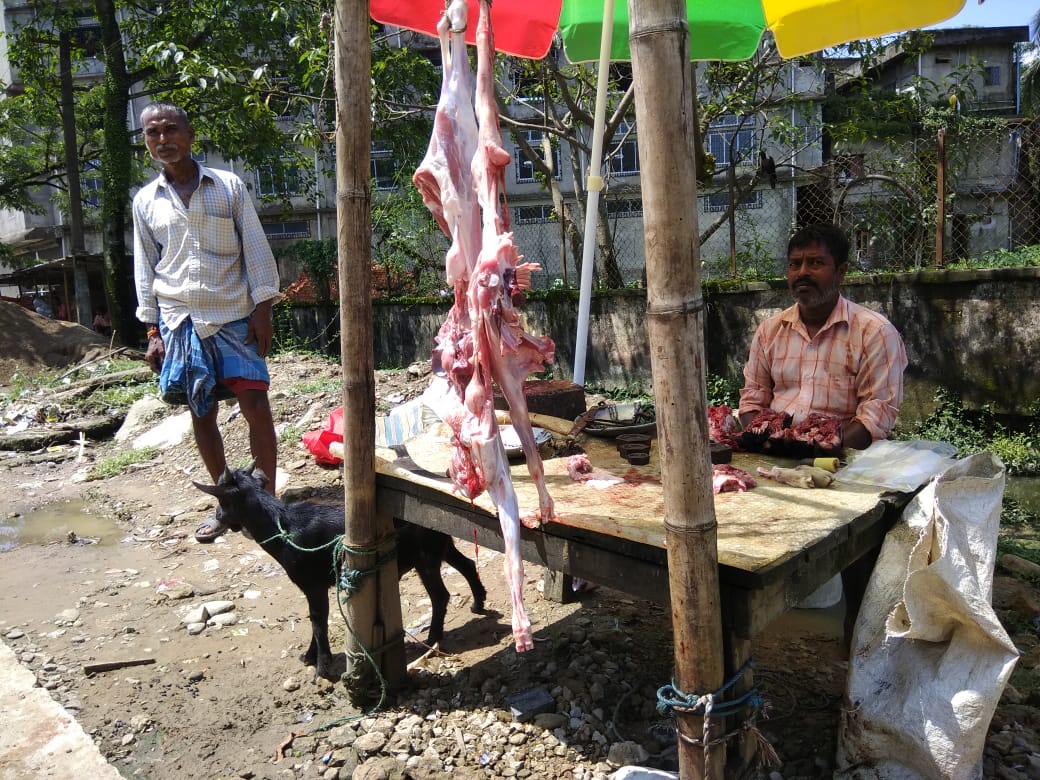 The city has, since decades, been looked down upon by those from the neighboring states of Mizoram and Meghalaya for its poor state of hygiene and inefficient civic planning. But it almost seems as if the tussle here is not really about providing solutions but of passing on the blame to a different entity, which, in a way, spares everyone from the moral duty of keeping the city clean. So, are we too used to the filth of Silchar to be ashamed anymore?

Is the current state of Silchar a result of lack of awareness or lack of leadership? These vital questions still remain to be answered.

Schools opened but parents hesitant to give NOC, attendance in Silchar remains low