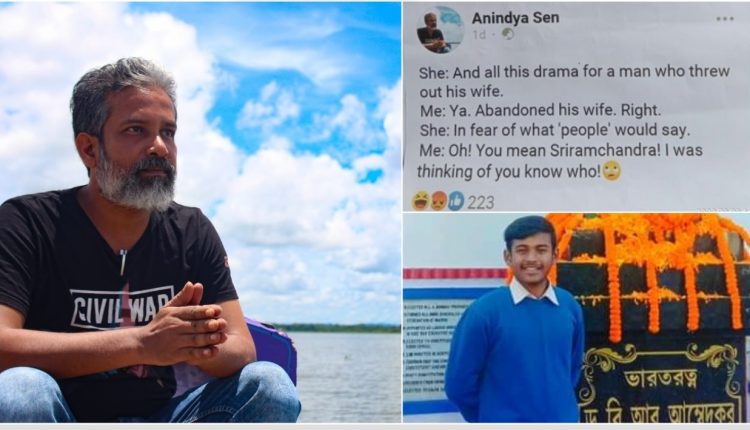 An FIR has been lodged against an assistant professor department of English Assam University Silchar, Anindya Sen for allegedly “making derogatory remarks against Shri Ram Chandra and hurting religious sentiments.”

The copy of the FIR states that professor Anindya Sen “Made derogatory remarks against Prabhu Ramchandra on social media. He also continuously posts such abusive posts defaming Hindu dharma and also abuses constitutional posts like Prime Minister and Home Minister of the country.”

The public post uploaded by Professor Anindya Sen reads:
She: And all this drama for a man who threw out his wife.
Me: Ya. Abandoned his wife. Right.
She: In fear of what ‘people’ would say.
Me: Oh! You mean Sriramchandra! I was thinking of you know who!

A case has been registered against Professor Anindya Sen under section 295A, 294 and 501.

Section 295 A for deliberate and malicious acts, intended to outrage religious feelings of any class by insulting its religion or religious beliefs.—Whoever, with deliberate and malicious intention of outraging the religious feelings of any class. Section 294 of the Indian Penal Code lays down the punishment for obscene acts or words in public. And 501 for printing or engraving matter known to be defamatory. Under 501, if a person found guilty, shall be punished with simple imprisonment for a term which may extend to two years, or with fine, or with both.

“Insulting Hindu Gods and Goddess and hurting the religious sentiments have become a fashion in Silchar,” said Rohit Chanda, a student, member of Akhil Bharatiya Vidyarthi Parishad and the complainant in this particular case.

He added, “From criticising the government and government officials, now they have moved to defame religion. Being a professor of such a reputed institution, when they propagate such thoughts, others start following. For example, we recently saw a schoolgoer promoting beef consumption on Facebook. We have filed an FIR against professor Anindya Sen as we believe it is important for such hate-mongers who keep posting provocatory remarks to intentionally hurt religious sentiments to be investigated and punished.”

When we reached out to professor Anindya Sen, he laid down his side of the story. He said, “I had no intention of insulting Sri Ram Chandra. There are various versions of Ramanaya and in many of them, it is clearly mentioned that Sri Ram Chandra had abandoned his wife at Valmiki’s Ashram. For this act, Sri Ram Chandra has been criticized by many and the same has been chronicled too. I had just shared that criticism. If by doing that, I have unknowingly hurt any religious sentiments then I would like to express my regrets for the same.”

Chanda had recently lodged an FIR against a GC College Professor for posting derogatory remarks. The professor was later arrested and is now out on bail. What course of action the police takes now, remains to be seen.