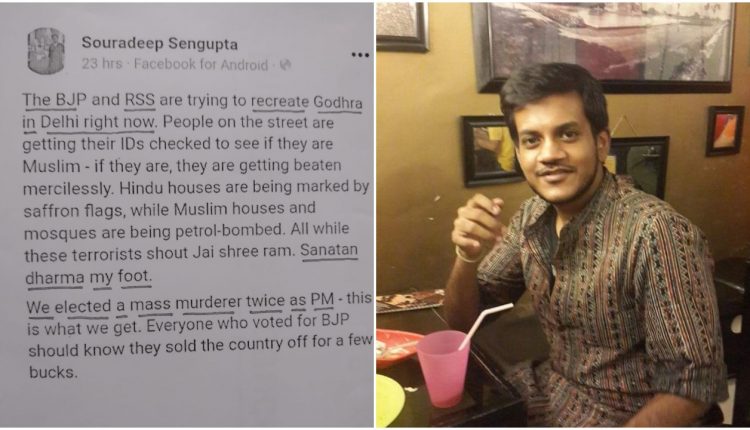 A group of students assembled today at Gurucharan College in Silchar and demonstrated against Souradeep Sengupta a guest lecturer at the institution. Sengupta teaches Physics in Silchar Gurucharan College and posted “Hindutva is a Cancer. Wake up, people.” Not only that, he went on to call the Prime Minister of India a “Mass Murderer” on his social media walls.

This has irked a large population and a section of students. Today, the students filed an FIR at Silchar Sadar Police station against Souradeep Sengupta for allegedly hurting the sentiments of people belonging to a particular religious community. “We have submitted a written complaint to the Principal and the teacher’s council. We have appealed to the authority that we must take requisite steps to ensure that this does not happen again, at least in Gurucharan College,” said Subhasish Choudhury a student of the institution.

Rohit Chanda, another student of Gurucharan College filed an FIR on behalf of the protesting students and he was accompanied to the Sadar Police Station by several of his fellow mates and senior students of Gurucharan College namely Subhasish Choudhury, Karanjit Deb, Bijoyan Nath, Snehangshu Chakrabarty, Souvik Bhattacharjee and many more. The Police officials have assured the students of stern action against the accused if found guilty.

In the FIR, the students mentioned that Sengupta posted, “Sanatan Dharma my foot” in one of his posts which is a derogatory remark that could disturb the communal harmony in Barak Valley.

In the aftermath of the mayhem that was unleashed in National capital, Sengupta posted on Facebook, “The BJP and RSS are trying to recreate Godhra in Delhi right now. People on the street are getting their IDs checked to see if they are Muslim – if they are, they are getting beaten mercilessly. Hindu houses are being marked by saffron flags, while Muslim houses and mosques are being petrol-bombed. All while these terrorists shout Jai Shree Ram. Sanatan Dharma mt foot. We elected a mass murderer twice as PM – this is what we get. Everyone who voted for BJP should know they sold the country off for a few bucks.” 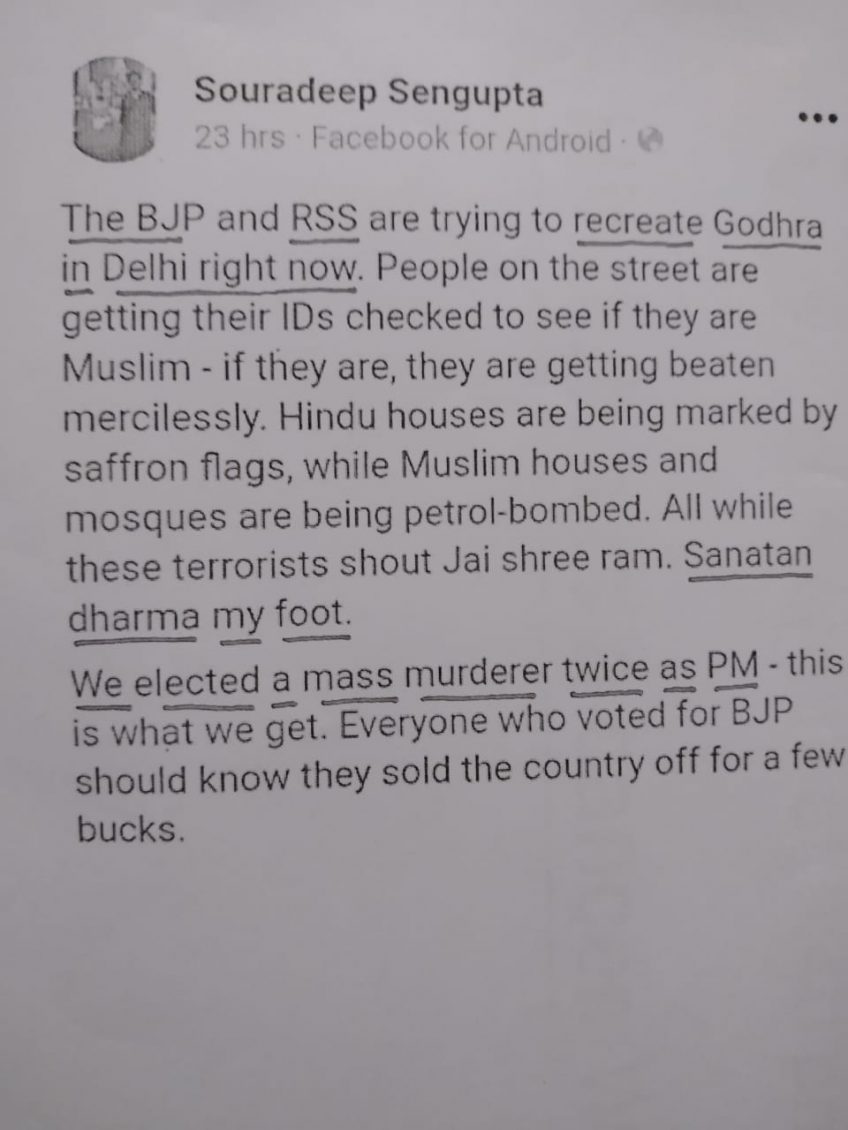 However, he has deleted all those posts and issued an apology. His post on Facebook apologising to his friends and followers reads, “I apologise for any religious sentiments I may have hurt by my posts. I made some irresponsible comments about a communally sensitive issue. It was a lapse of judgment. My intention was not to insult any religion at large.”