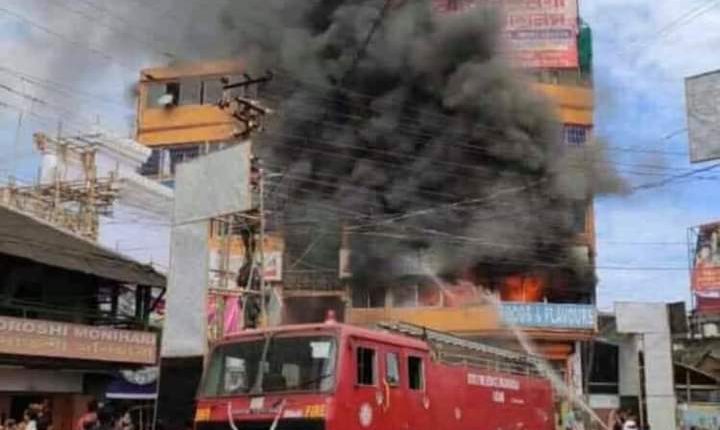 Fire at a commercial complex in Hospital Road; Five Engines rushed to the spot

The Mahalaya morning excitement was cut short for the people of Hospital road as flames were spotted fuming out of the busy commercial complex.

This complex hosts Food and Flavours sweet shop and restaurant along with branches of Star Union Dai-ichi a Life Insurance, State Bank Of India and many other offices.

At around 9:15 AM when the Ambicapur Purba Para Durga Puja committee started its Mahalaya programme, the noise of a blast shocked them all. Immediately, around 150 people present in the programme saw flames coming out of the commercial complex.

“The locals, mostly Puja Committee members used their presence of mind and called fire-brigade. We also broke the glasses and took the necessary precautions,” informed Tamal Kanti Banik, local commissioner, Silchar Municipality Board. He added, “Because of the awareness of locals we managed to escape what could have been a much bigger disaster.”

“What we have understood so far, it looks like a short-circuit, however, the Fire Brigade is yet to submit its report. Locals removed the cylinders from other stores in the building to ensure the fire does not spread wild. We did not go inside, from out the first floor looks completely burnt,” added Shibayan Roy, a local resident who was present at the spot.

Five engines of the Fire Brigade rushed to the spot and as per latest available information the fire is under control. Biswajit Paul and his family reside in the same building and as per ground reports, they have been rescued unhurt.