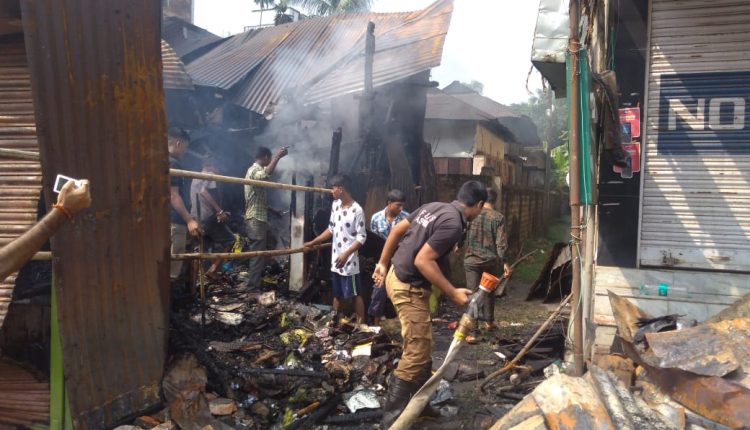 By barakbulletin On October 8, 2018 - 11:13 am
Share
Instead of Birendra Krishna Bhadra in the morning of Mahalaya, the residents of Hospital road woke up to flames and dark smoke. The MS Pandap Paul sweet shop near the Bhola Shankar Bakery in Sahid Sunil Sarkar lane was burnt to ashes this morning.

Early risers noticed the thick smoke and immediately informed the fire brigade. A fire-engine wailed its way to the spot and brought fire under control, “The sweet shop was the source of the fire and we have managed to stop it from spreading further,” said an official in Silchar Fire station Tarapur. While the firemen are yet to submit an official report, it is presumed that a short circuit caused the destructive fire.

The shop was opened recently and is run by Pradip Paul, a member of the famous Paul family, which runs several shops in Fatak Bazar, Janiganj and elsewhere. The family refused to estimate the loss caused due to this fire. As per locals, they can still see smoke coming out of the shop, “Since today is Mahalaya, we woke up early and all of a sudden we saw a huge flame. That is when we rushed out to see what happened,” said an eye-witness.
AccidentAssamBarak BulletinBarak Valleyburnt to ashesearly morningFirefire brigade
Share FacebookTwitterWhatsAppEmailLinkedin
You might also like More from author
News