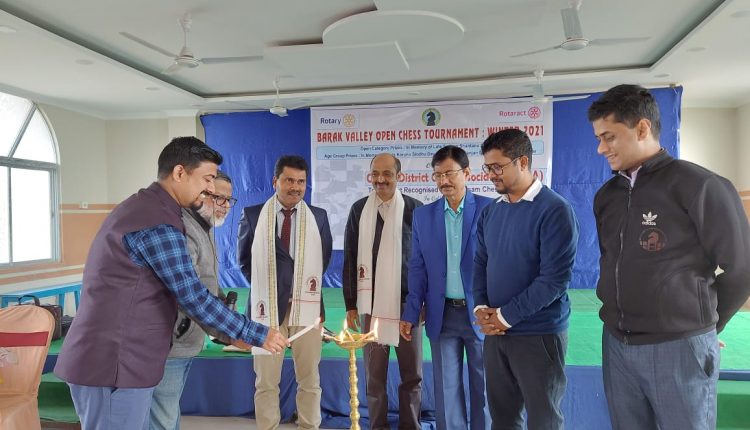 The first ever Barak Valley Open Chess Tournament Winter edition has commenced in the spirit of International FIDE Rating competition. Organized by the Cachar District Chess Association (CDCA) in collaboration with Rotary Club, Silchar, a total of 63 players have participated in this edition, among which 26 are International FIDE rated chess players.

“Usually in Cachar district, every local tournament is being moderated by normal arbiters with normal clocks and everything. But this particular tournament everything we’ve tried to keep upto the FIDE standards, starting with national level chess boards having its own clock, FIDE rated International arbiters, everything including the atmosphere according to FIDE style’, said the General Secretary of CDCA, Nirmalya Chakraborty.

He also said that the tournament will be moderated by International arbiter Pradip Kumar Roy from Tripura, who is a FIDE rated arbiter.

Keeping in accordance with the FIDE standard time limit, every player at the start of each round will get 45 minutes and with each move will get 10 seconds more. The two-day tournament has been divided into 3 rounds per day. At the start of the tournament, top seeded player Rajib Dhar had 2052 FIDE Rating points in his bag, followed by Soram Rahul Singh having 2051 rating points. At the conclusion of the day, sitting at the top bagging three points in three rounds are Soram Rahul Singh, Rajib Dhar, Rajdip Das, Iftikhar Alom Mazumdar, Bibendu Das, Abhinav Paul, Abhrajyoti Nath and Ballyr Sinha.