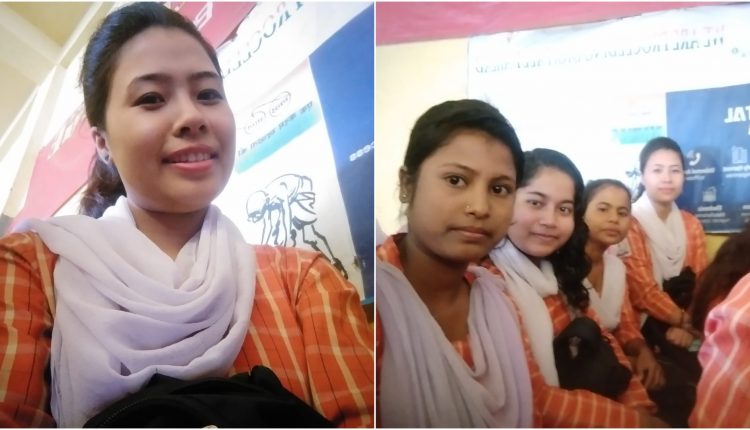 Rabindranath Tagore might have written, “Where the mind is without fear and the head is held high; Where knowledge is free…” but in reality, when knowledge gets packaged and branded it becomes an expensive proposition that many still cannot afford.

In 2013, L Priya Singha passed her High School Leaving Certificate Examination securing first division marks. The Tarapur resident wanted to study further but her family decided it’s too much to afford. L Priya Singh’s education was all but over, she got married.

For more than five years she kept herself busy with household chores. But one day, in 2018, she told her husband that she wants to study further. Her husband appreciated her willingness and decided to support her in all possible manner. Her in-laws joined the couple and mission HS-2020 took off, but it hit turbulence.

L Priya Singha did not study for more than five years and the sabbatical grew her far older than the rest of her classmates. She says many colleges denied her admission and the ones did were too expensive for her to afford. Then she got to know about Monmohon Ghosh Anil Das Memorial College in Ramnagar. Her husband got her enrolled in the Arts stream and she started her preparation.

On June 25, 2020, Assam Higher Secondary Education Council (AHSEC) declared the results of HS examinations conducted earlier this year. L Priya Singha’s nervous moments came to an end when she was told that she secured 82% with letter marks in two subjects.

“I never thought I will get to study again, appearing for the examination was like a dream that I thought would never come true. But things turned around and I am really happy that I could perform well,” said L Priya Singha while speaking with Barak Bulletin.

Monoj Ghosh and Sanjit Kumar Das, directors of Monmohan Ghosh Anil Das Memorial College said the management is happy that it could help L Priya Singh fulfill her dreams. “Private College means hefty admission and tuition fees, this perception is not always true. Our admission fee is as low as Rs 6,500 and our students do not need private tuition. The teachers address the problems in classrooms itself,” the spokespeople added.

Established in 2015, Monmohan Ghosh Anil Das Memorial College is located in Ramnagar Area. The college approved by the government of Assam, Monoj Ghosh said was started with the intention of making education more accessible as it did in the case of Priya. “We have had such students before too,” said the management.

While it is a matter of celebration, L Priya Singha does not want to waste much. Her aim is to study further, “I will now complete my graduation,” she said. Going forward, she wants to be a good teacher.

Well, “Knowledge” might not free, but there are still “minds without fear” and “heads held high”…

Strike, protest at a quarantine centre in Hailakandi; CRPF, Police, Administration on the spot