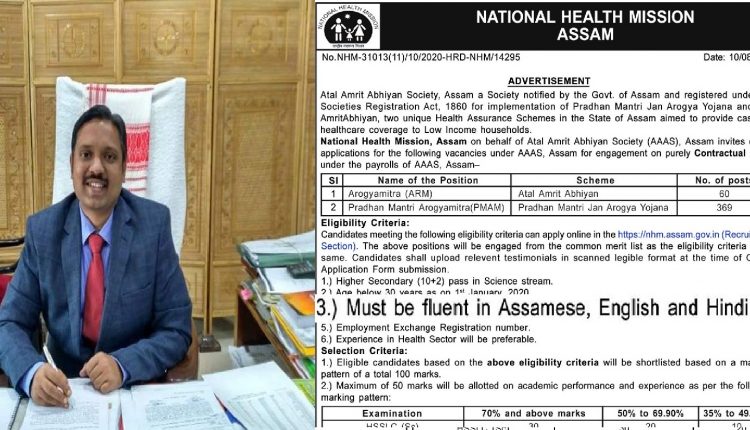 Fluency in Assamese as eligibility criteria for Govt Jobs on ad is a "Mistake" says NHM Director, "Will issue corrigendum"

Yesterday morning, the Directorate of Information and Public Relations, Assam shared National Health Mission’s advertisement for job vacancies. The piece of communication has hit Barak Valley as a torpedo. One of the qualities that the candidate must have in order to be eligible for the job, as per the ad is ” Must be fluent in Assamese, English and Hindi.”

Bengali, as well as Bodo, are also official languages in Assam. There are potential applicants in Barak Valley and Bodoland Territorial Area Districts which the chief minister says are the “integral part” of the state. Proficiency in Assamese is rare in most parts of the two provinces.

For the freshers, Atal Amrit Abhiyan Society, Assam a Society notified by the Govt. of Assam and registered under the Societies Registration Act, 1860 for implementation of Pradhan Mantri Jan Arogya Yojana and Atal Amrit Abhiyan, two Health Assurance Schemes in the State of Assam aimed to provide cashless healthcare coverage to Low-Income households.

The “eligibility criteria” mentioned in the communication are:
1.) Higher Secondary (10+2) pass in the Science stream.
2.) Age below 30 years as on 1st January 2020.
3.) Must be fluent in Assamese, English and Hindi.
4.) Must be computer literate.
5.) Employment Exchange Registration number.
6.) Experience in Health Sector will be preferable.

In Barak Valley, several associations condemned the advertisement and many went on to say that without any constitutional approval, the state has implemented the High-Level committee’s recommendations which dictates the government to make Assamese compulsory.

The astonishment was higher as the advertisement was signed by Dr. S Lakshmanan, mission director, National Health Mission Assam. It is worth mentioning here that Lakshmanan, before taking charge of NHM Assam, was the deputy commissioner of Cachar and is aware of the linguistic and cultural dynamics of the region.

“Yes, the advertisement was signed by me but it was prepared by the Atal Amrit Abhiyan Society. Local languages should have been mentioned in the advertisement wherever applicable. It is a mistake and we will issue a corrigendum,” said Dr. S Lakshmanan while speaking to Barak Bulletin.

He added that it must have happened because of a possible last moment rush and assured that he will personally look into the matter. “Though the advertisement was released by NHM Assam it was drafted by Atal Amrit Abhiyan Society and both the teams must have missed it. I will check and correct it immediately,” Lakshmanan added.

Barak Valley: Bridge ready but approach missing; How taxpayers' money is getting wasted