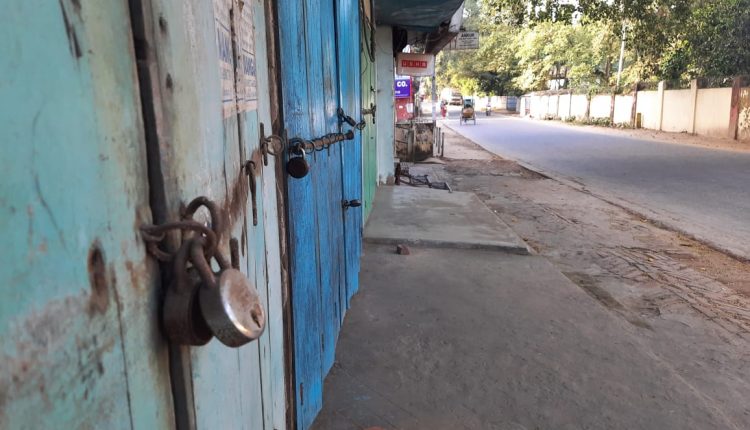 From 668 cases a day to 98 with just one hospital and 22% vaccination; Cachar deserves praise, not lockdown

Remember last year? When Himanta Biswa Sarma said that if he sanctions Rs 50 lakh in Guwahati, as the PWD Minister, he sees great work being done, however, for Cachar, he sees nothing fruitful at all. Or more recently, when two committees were constituted to formulate an evaluation method for Class X and XII students, only one teacher from Silchar found a spot in the committee for HS, HSLC had none from Cachar or Barak Valley. There is a general perception and that’s “There is nothing good in Cachar.” From the top ministers to the bureaucrats running the system, this is a general perception among all. The media loves it too.

In the last few days, Cachar was in the headlines of most news channels headquartered in and around Dispur – the state’s capital. One headline read, “On one side when the cases are rapidly rising in Cachar, the roads are getting crowded on the other, it is a complete chaos…” Indeed the roads get crowded when the curfew deadlines approach, but to brand the district as a failure on the basis of a picture of a crowded road and completely ignoring the numbers would be unfair at best and malicious at worst.

In the last SOP issued by the Assam State Disaster Management Authority, it was mentioned that the government will observe the situation in Cachar and if the Covid situation does not improve, stricter restrictions will be imposed. While that was an official mention of Cachar, many in the district, as well as in the State interpreted it as an unsatisfactory performance of the district. Bureaucratic red-eye was followed by an informal nudge by the CM. He mentioned 10 days of lockdown in some districts where the cases are rising and immediately. He did not name Cachar, but it was one of the districts he was talking about, as per reports and highly placed sources in the CMO.

But why suddenly Cachar is becoming a cause of concern? In May 2021, which has been the peak of second-wave in Barak Valley, for a week, Cachar consistently reported more than 600 cases, 668 being the highest. At that time, the restrictions in Cachar were the same as elsewhere in the state. While the Prime Minister of India, repeatedly urged the states to follow a “horses for courses” method, Assam followed its own model. As a result, Cachar which has one hospital – Silchar Medical College and Hospital (SMCH) treating symptomatic cases across three districts, followed the same norms and restrictions as Kamrup Metro which is surrounded by quality government and private hospitals. 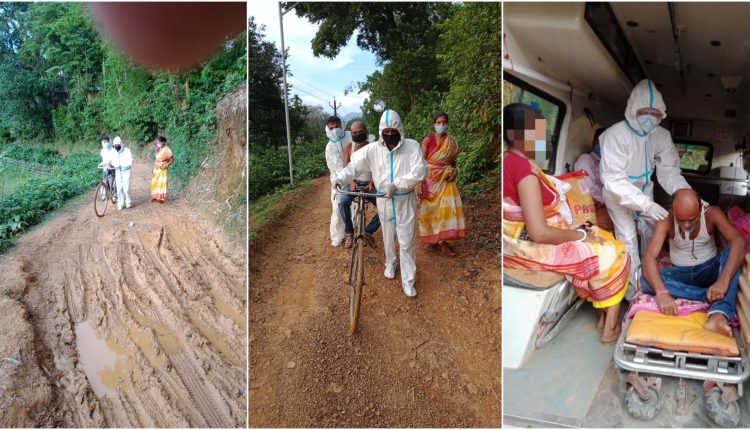 Most of the pandemic, Cachar covered with 100 ICU beds, Guwahati and Kamrup at large have more hospitals. Patients from Karimganj and Hailakandi queued up at SMCH as there were no ICUs or even Oxygen beds in those districts. A load of 40 lakh population and yet there were no images of people dying while waiting on a stretcher outside the hospitals, as was the scene in Delhi and Mumbai during the peak of the second wave. From that peak and around 10 deaths a day to 120 patients and two deaths, how has the situation not improved? The state’s secretariat is yet to answer that.

While the doctors and healthcare personnel worked relentlessly to control the cases in hospitals, the public remained aware on the ground. Yes, a few hundred fled from the airports and railway stations and while doing so, they exhibited sheer callousness to defame the district. Even a magnified image of that failure would fail to rise above the exhibition of awareness. At a time, when the vaccine hesitancy is high all around the Northeast, the general public in Cachar even in the Gaon Panchayat areas is queuing up. The situation went that far in East Khasi Hills – a neighbouring district of Cachar in Meghalaya, a man had to be arrested for outraging the modesty of a woman. The woman is none other than the Deputy Commissioner of East Khasi Hills and she had made it mandatory to get vaccinated in order to participate in economic activities. Cachar too has a woman as the DC and never ever has anyone attempted to outrage the modesty of a female officer. 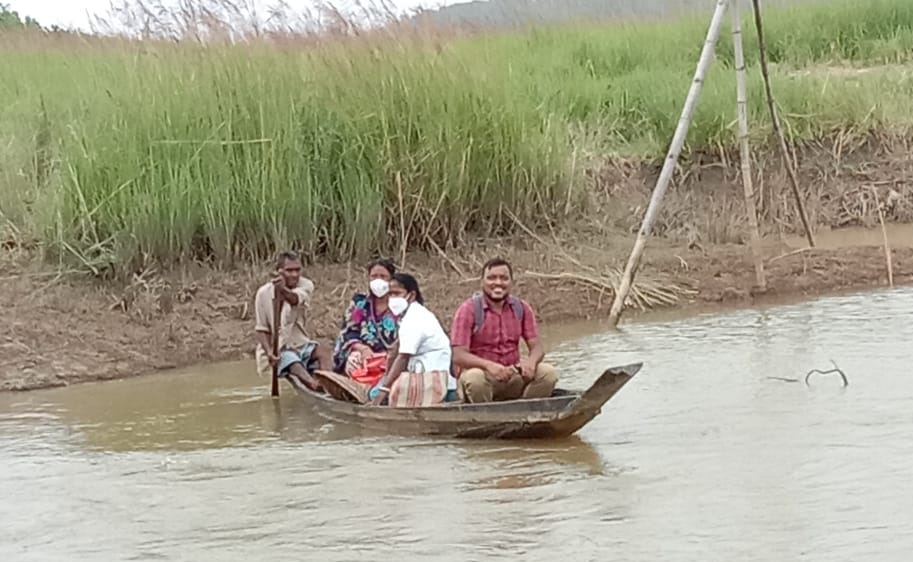 Lastly, the administration. Handicapped with astronomical vacancies in grade III and grade IV positions, submerged Municipality Board with employees without salaries and shortage of nurses and doctors in the public healthcare centres, the fact that the district has not collapsed while hit by the Tsunami sized wave of infections in itself is a big achievement. From escorting patient in a cycle as there was no road for the ambulance to ply to nurses sailing on boats to innoculate jabs, the officials have gone the extra miles. More than 15,000 tests were performed in a day and on the same day around 12,000 doses of vaccines were inoculated. To pull off a drive at that scale needs dedicated efforts and the officials have proved that they are worth the salt.

As they sit-in Guwahati, and term “Cachar a cause of concern” it needs reminding them that if it is so then it is because of them. When the Chief Minister of Assam tweeted about 40 per cent of Kamrup Metro being vaccinated, only 12% of Cachar’s eligible population had got a dose. (Here is a detailed story published back then. Click Here). Even today, despite the drives in Urban and Rural parts of Cachar, 2,85,358 doses have been inoculated. Compare it with Kamrup Metro, where the number of doses, as per the government’s official record stands at 7,66,341 almost three times that of Cachar. In case you think it is based on population, let’s bust that myth too. Cachar has 12,78,881 voters while in Kamrup Metro, the number of voters stands at 11,52,748. So, for less number of eligible beneficiaries, Kamrup Metro gets three times more doses… should we really point fingers at Cachar for the situation not improving? Is there a Harry Potter spell that will improve the situation overnight?

Lastly, yesterday, honourable Health Minister of Assam, Keshab Mahanta tweeted, “I laud the #Kamrup Dist. administration for the remarkable mgmt of #Covid19 situation. In line with the #vaccinedrive, a target of 10K Vaccinations daily in the dist from June 21 has been set, in a meet DC office with MLAs, MLA Corr., Officials of H&FW & NHM, DC, SP, & other officials.” Congratulations to the people of Kamrup Metro, the district administration and the healthcare officials in the district. Well, Mr. Minister, you laud the efforts of a district administration while setting a target of 10,000 doses but did not even mention a word when Cachar inoculated more than 12,000 doses that too without a target. Silchar Medical College and Hospital became the first Medical College in Assam to complete 2 lakh tests, but no Ministers tweeted about it, Cachar Civil Hospital successfully delivered a baby weighing 5.2 KG, possibly the heaviest baby at birth ever in Assam, still no word from the Ministers otherwise proactive on social media.

This shows, that even if the situation has improved leaps and bounds in Cachar, for the Ministers and the Chief, Cachar remains in the gutter in their head. It is therefore, they don’t even abbreviate Cachar, on their social media feeds. But you all are the Ministers of Cachar too, and if it is a gutter it belongs as much to you.

For those who still believe in numbers and not just a few pictures: Take a look at the Covid situation in Cachar over the period of last 15 days: 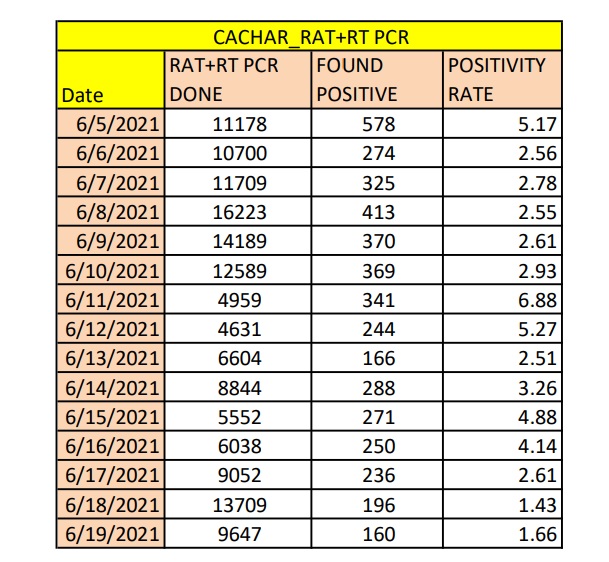 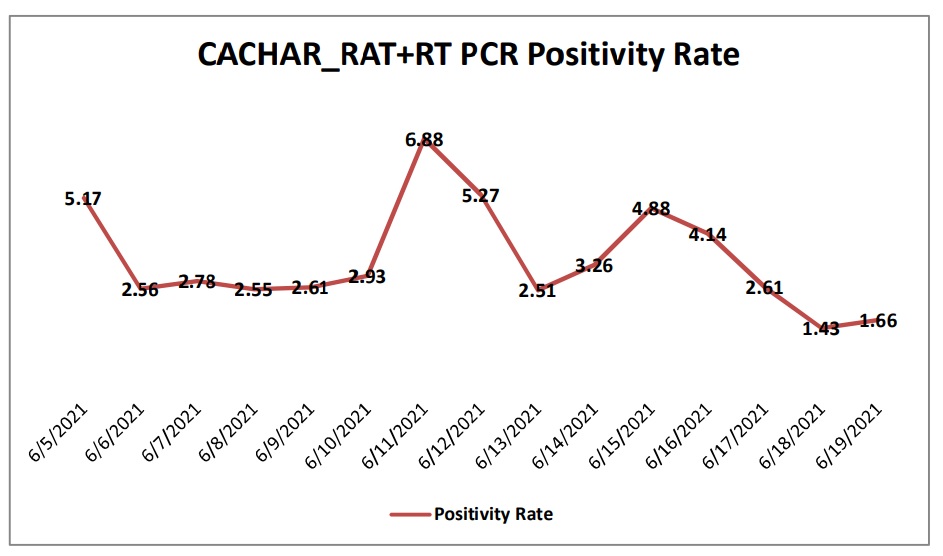 Please Note: Vaccination numbers have been sourced from COWIN Dashboard, at 2:00 pm on June 21.