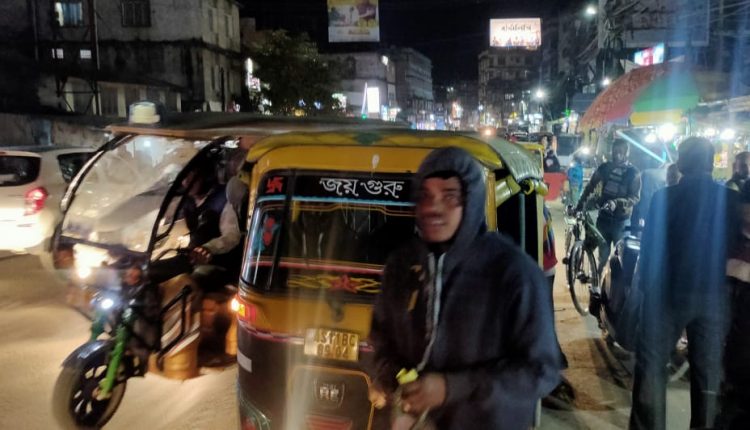 From making new rules to hiking fare at will; how auto-rickshaws disrupted public transport system in Silchar

Currently, if you get on an autorickshaw for a ride, it would make a substantial hole in your pocket. The fare has doubled and in some cases tripled when compared to what it used to be before the pandemic earlier this year. The passengers often question this improper hike by the auto-drivers, and allege that in most cases, they even misbehave.

“They simply ask to get off if you question them about fare hike or even about masks,” said an eighty something old male passenger. Several memorandums to different offices yielded no result. The fare remains high, higher than it ever was and the auto association, each time asked about it, pointed fingers towards the price of petrol per litre. They also use the change of route as an argument to support their price-hike. For the freshers, the autorickshaw route has been diverted through Chandicharan road in order to reduce clutter in the Premtala – Rangirkhari stretch.

Chief of the auto association, Bikash Bhattacharjee remains unavailable for comment. When reached out, he simply said that he will speak up when the time is right. His one-line answer is, “The auto-drivers are not charging anything excess of what is recommended by the government of Assam.”

The District Transport Officer Angshuman Biswas or his predecessor Siddhartha Saikia, at best dodged the issue and at worst did not even bother about the plight of the locals. The Cachar Police, on the other hand simply direct queries towards the DTO’s office. “If the DTO sets a price that needs to be adhered to at any cost. If the fare needs to be revised, there is a proper channel of doing so. If we get complaints, we will take strict action,” said a top officer in Cachar Police.

With all fairness, Biswas did take questions on the fare when our correspondent reached out to him. What can be termed as a strict warning, the DTO said, “Government has not increased any fare, so nobody can charge double fare if anyone found doing it, will be punished.”

Now, what is the fare? How has it been determined? The autorickshaw business in Cachar is at best murky and at worst fraudulent. First and foremost, according to the government, the autorickshaws need to ply on metre charges. Which means, it can only hire one set of passengers which could be one individual or at the most three individuals. All of them will pay a combined fare and not fare per head. The fare for first one kilometre according to government, should, “not exceed Rs 25 against a metre reading of Rs 18.75.”

This means, for one kilometre, the auto-driver can only charge Rs 25 from the total number of passengers seated in the rickshaw. For subsequent kilometres (after one kilometre), the fare cannot exceed by Rs 2.38 per 200 metres. Meaning Rs 11.9 per kilometre. So, for a trip of five kilometres, the rickshaw driver can charge maximum Rs 72.6. (Rs 25 for the first kilometre and Rs 48 for the remaining four kilometres at Rs 11.9 per kilometre). If there is any detention (wait time), the fare will increase by Rs 4.50 per 10 minutes. At night after 9:00 pm, the drivers can charge 50% more as surcharge or night charges.

This is the fare for entire autorickshaw that has a metre installed in it. In Silchar, the autorickshaws do not ply on meter. Instead, they follow a sharing-hire system pulling five passengers at the same time. For a trip covering five kilometres, the auto drivers charge Rs 20 and in some cases Rs 30 per passenger. Which means Rs 100 or Rs 150 per trip of five kilometres whereas the fare should not exceed Rs 72.6. In each five-kilometre trip, there is an excess charge of Rs 28 to Rs 77.4. This happens in broad daylight right under the nose of the administration which plays the role of spectator.

While in all big cities, the autorickshaw follows the metre system and a fixed-fare sharing system. There is no system in Silchar. Why so? A senior member of the auto-association on condition of anonymity explained. In Silchar, autorickshaw is a medium of communication for the middle and below middle-class people. They cannot afford to hire an autorickshaw on metre-charges and that is why the autorickshaws started plying on a sharing basis.

“The metre fare is divided among three passengers and based on that the fare is charged. Even now, the fare is not excess of what the metre charges are,” said the member of the auto association.

But why divide among three when the autorickshaws seat five passengers and charge all of them separately? “The two excess passengers sit at the front on either side of the driver. That does not disturb the passengers behind. Now, if the autorickshaw driver and the owner are willing to risk their vehicle and carry two more passengers to earn a little more, why should the three behind have any problem? This is a Kanhaiya Kumar (former JNU president) like argument. Instead of dancing on the head of poor auto-drivers and making an issue out of nothing, reporters should focus on how the rich are parking at the middle of the road and making life hell for the auto-drivers. But who has the audacity to question the rich,” replied the member of auto association.

Hidden in the rant is the fact that they have made a few rules by themselves signing a few arrangements with the administration. A professor of GC College feels this change in the law is not only impacting the savings of passengers but also causing traffic problems. “The government has bureaucrats who burn their midnight oil to come up with rules and regulations. They aren’t fools, in fact, there are only a few wiser than them. Those rules then get enacted by the respective ministry ran by an elected representative of people. Abruption to that system amounts to anarchy,” opined the professor.

He added, “The reason why autorickshaw trips come at a cost is to promote bus service which is available at a cheaper rate. This was done to balance the number of vehicles according to the size of the town so that the roads are not overcrowded. This sharing auto system has disrupted the city bus service which has now almost ceased to exist. As a result, the number of autorickshaws has exploded. There are no badges or uniforms to recognise which autorickshaws are running legitimately. A major reason why the roads are mostly packed and there are huge traffic jams is the unruly rise in the number of smaller vehicles.”

The professor urged the administration to relook at the entire arrangement and see if a balance can be found again. “At the heart of it, we are ruining the environment too and making Silchar an unsafe place for our next generations. The damage is much more than just a few rupees,” said the professor who has a PhD.

Few students did hit the roads to protest against the anomalies that were not restricted to auto only. They achieved success in bringing the fare of Cruisers and Travellers down significantly. But with auto, the students too faced a roadblock.

Snehal Chakraborty of Gurucharan College, one of the prime members of the protest asserted, “We on behalf of all the students demanded to keep the price low and submitted a memorandum to the DC, DTO, SP Office and Tuktuk association on November 10. Later on November 17, we had another long protest and accordingly a meeting was held among the high officials of Cachar District where we were informed that the auto and tuktuk drivers will charge according to the distance travelled and due to the price rise in petrol and One-way direction, which costs the autos more distance to cover, a minimum change may occur in the price chart for longer distance. The charge for shorter distance will remain the same.”

Call them Kanhaiya Kumars, but, with ‘Bharat Mata Ki’ slogans, they did block the road compelling the Cachar district administration to put its foot down.

The autorickshaw business in Silchar, the traffic jams, the diminishing City Bus service, the astronomical increase in the number of autorickshaws, they are all connected. At the root of it is a gross violation of the Transport Department’s fare chart that is ordered by the Governor of Assam. This violation has disrupted the public transport system which has been designed keeping the propensity of pay in mind. Will it ever get restored? It all depends on how DC Cachar Keerthi Jalli, DTO, Angshuman Biswas, SP Bhanwar Lal Meena wants to run the administration. They alone cannot do it because, MP Rajdeep Roy, MLA Dilip Paul will also have to play a role. For now, there are no signs of auto-fare decreasing anytime soon.