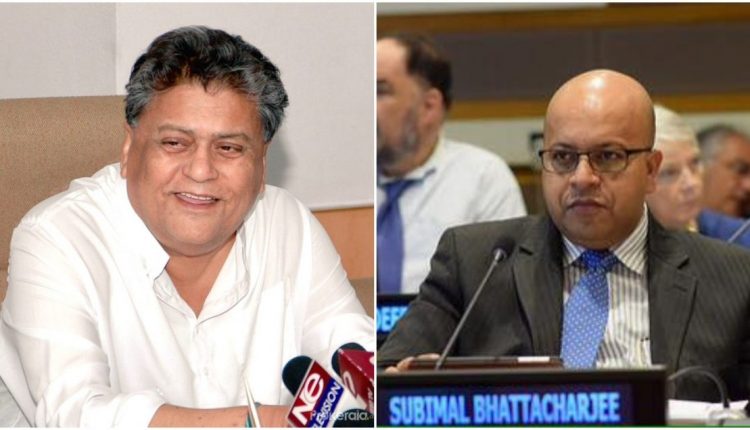 Today, 2nd August 2018, marks the first death anniversary of Santosh Mohan Dev. One of the tallest political leaders from Assam, he is still missed across the Barak Valley. His interest across many areas, ranging from politics to sports to culture was spectacular. Right from Silchar to New Delhi, he had admirers cutting across the political divide and varied interests. People of all age could mingle with him and have an engaging conversation on any issue.  For many, he was the guardian whom they still miss.

While I am a contemporary of his youngest daughter Sushmita Dev (currently a member of parliament from Silchar), I always enjoyed my conversation with him despite he being elderly. His capacity to connect with people of all ages was tremendous and he was a person, who would pick up every phone call. It will be worthwhile here to share some of my personal experiences.

Being born and brought up in Haflong, in my early childhood, I had no opportunity to meet him, although we knew everything about him and took pride that he was a man of such stature from our community. As a student, later at the University of Delhi, when I was the general secretary of the Mansarowar Hostel Students Union, I went to meet him a couple of times. Therein once, I went to invite him to be the chief guest of the annual nite of the hostel on 13 March 1996. He was sad that he would not be able to make it as he was going for the, now infamous semi-final of the Wills Cricket World Cup. The match was forced to call off owing to the disrupt among the audience and Sri Lanka was declared the winner over India. He later told me it would have been better to be at my event than the non-sporting match.

When I was active with Srihatta Samillani Delhi (SSD), I used to meet him in the numerous functions organised by the association. As a chief patron, he supported the organisation for many years and even got the plot of land, where Srihatta Samillani started the Bipin Chandra Pal memorial trust. It was no mean task to get land in the prime of the city of Delhi. But he diligently worked to get this institution in place in a very short time. I still remember an incident, when in a function of SSD, two senior politicians from the community were agitated and used the podium to hit at each other. Shri SM Dev was very cool and kept smiling, and later told both of them that people are watching. Unfortunately, when I became the president of SSD in 2014, he was unwell, and we couldn’t have him for any of our functions. Although, we always had his full support.

I also remember a beautiful memory from a dinner in Bangladesh High Commissioner’s residence in Delhi. He hummed the Rabindra Sangeet ‘Jodi tor dak shune kew na aashe tobe ekla cholo re’ as Late Nitish Sengupta sang with the harmonium. When I used to go to their house in Silchar, the conversations that he narrated regarding his wide experiences were always full of humour and substance. Even when he was unwell, on my visit, he would hold hands and want to sit and chat. He would do this for anyone whom he could recognize.

His death was a very sad moment and the fact that he had to suffer for some time was something that I didn’t want to happen. But he was always cheerful. When he was unwell, there were constant rumours of his death on social media. It was really disgusting for me to read it. And when the sad news of his death actually reached me, it was a very depressing moment. Days later, when I visited Sushmita Dev in their Silchar residence and saw his smiling photograph, I couldn’t stop myself from thinking, will ever another towering figure from Barak Valley make such a mark that he made across sectors. I pray for the eternal peace of his soul. With the state facing some serious issues now, I am sure he is watching over, hoping it all settles down soon.