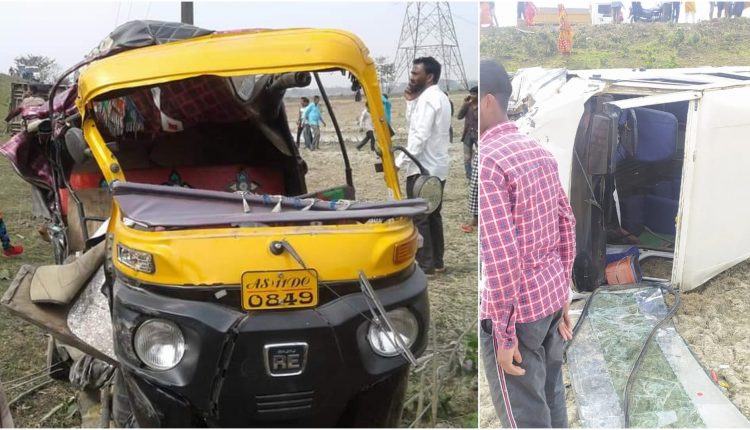 Head-on collision between Traveller and auto in Salchapra; 2 dead on the spot, 10 injured

In a tragic turn of affairs, an auto-rickshaw has collided head-on with a Traveller bus coming from the other side. The incident took place on the highway in Salchapra – Barakpar area.

Not only the auto-rickshaw, the Traveller which was packed with passengers has also rolled off the road to the nearby ditch. Many on board that vehicle have incurred serious injuries.

The locals gathered immediately and started rescuing passengers of both the vehicles. “A couple of them are in critical condition and they have been rushed to Silchar Medical College and Hospital. However, two of the passengers onboard the auto-rickshaw have lost their lives on the spot,” said a local resident who was involved in the rescue operation.

Police officials from the local Police station have reached the spot. They are now trying to calm the situation as the local public started agitating. Irked locals had also staged a roadblock, which according to latest reports, was withdrawn.

The white Traveller’s registration plate read AS 24 C 4677 while the auto-rickshaw’s registration number is AS11 DC 0849. As many as 10 people are feared to have incurred critical injuries.