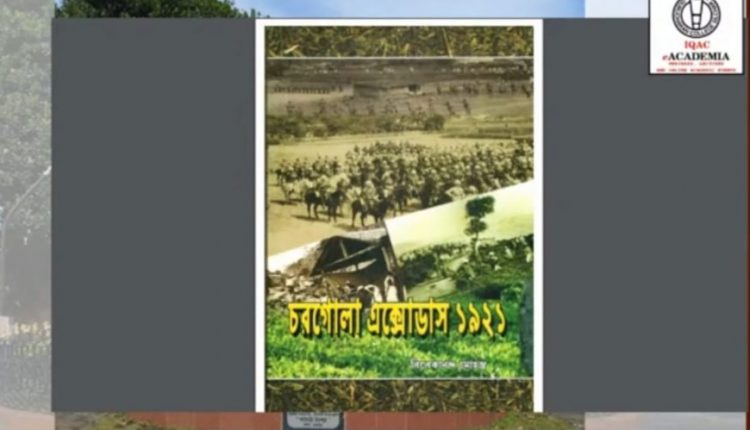 Barak Valley undoubtedly has an underestimated past, be it the lesser-known Portuguese Community living for centuries at Badarpur or the Bombing of Derby Tea Estate. Even in today’s technological world, the history book of our valley has many pages missing in it. Several institutes and forces are working hard to highlight those lost stories of glory and one among them is the IQAC of Gurucharan College and the Department of Political Science of this college.

Under the banner of IQAC eACADEMIA, the Department of Political Science had organised a “Regional Webinar” on the subject “Revisiting Chargola Exodus in its centenary year: 1921-2021”. Three guest speakers were present in that webinar. Dr Bibhas Deb, the Principal of the college welcomed all the guests and mentioned the importance of such webinars organised by his college.

Vivekananda Mahanta, a retired PHE Engineer by profession and an eminent writer and historian of this valley, started the said webinar’s technical session with his inputs and history of tea plantations in Barak Valley. An alumnus of the college, Mahanta left no details to make all the participants of this webinar understand this exodus in a very lucid manner in Bengali. Be it the geographical location of this place of the incident or the number of tea gardens present in that particular region. He is a “know-it-all” in the truest sense. He highlighted that the “severe depression in the tea industry during the early post-war years lead to the reduction of the wages of labours”, who mostly migrated from central India and were termed as ‘coolies’, of the Chargola Tea and its surrounding estates. This wage cut leads to an outbreak of protests by the labours which further took the shape of a nationwide labour movement. The labourers started leaving their tea garden for their hometown, as their demands were not fulfilled. This movement started on the 3rd of May 1921 was widely published in government and non-government studies and news reports with the name “Chargola Coolie Exodus”. Further, the independent researcher also put forward many facts regarding methods and payments and wages for the tea labourers and also that different tea estates had their own currency and tokens which were valid only inside that particular tea estate. His presentation included some rare photographs of coins and token money of many tea gardens of Assam. Vivekananda Mahanta also has a book published in Bengali with the title “Chargola Exodus 1921” to his credit.

Dr Devasree Datta, the Departmental Head of History Women’s College Silchar, who was also a speaker of the session, said that Chargola Exodus is a less-discussed issue of our country’s national movement, which was organised by a group of people who were extremely poor, illiterate and oppressed. She further added that, it should be remembered that this movement was held in one of the remotest parts of this valley. In her deliberation in English, she highlighted the fact that Chargola in that period was a part of the Sylhet district of present-day Bangladesh, which was largely known as the Surma Valley. Dr Datta put forward the fact that tea plantations required agro-based labours who were hardworking and easily available throughout the year. Such labour force was not present in this valley and the required number of labours were very high which forced the plantation owners to engage professional labour agents to bring labourer from North India namely the states of Bihar, UP, Madras, MP and Bengal. Famine stuck areas of these states made it easy for those hired agents to lure the poor people of those states to migrate to a foreign land with the hope of a better future. The recruited labourers were made to consent to an agreement which stated that the hired labour has to work in that particular tea estate for a mentioned time period and failing which would subject him/her to an imprisonment of one month and another month in addition if they still refuse to obey the consented agreement. Labourers were encouraged to migrate with their whole family so that they could settle more permanently in the place they migrated. 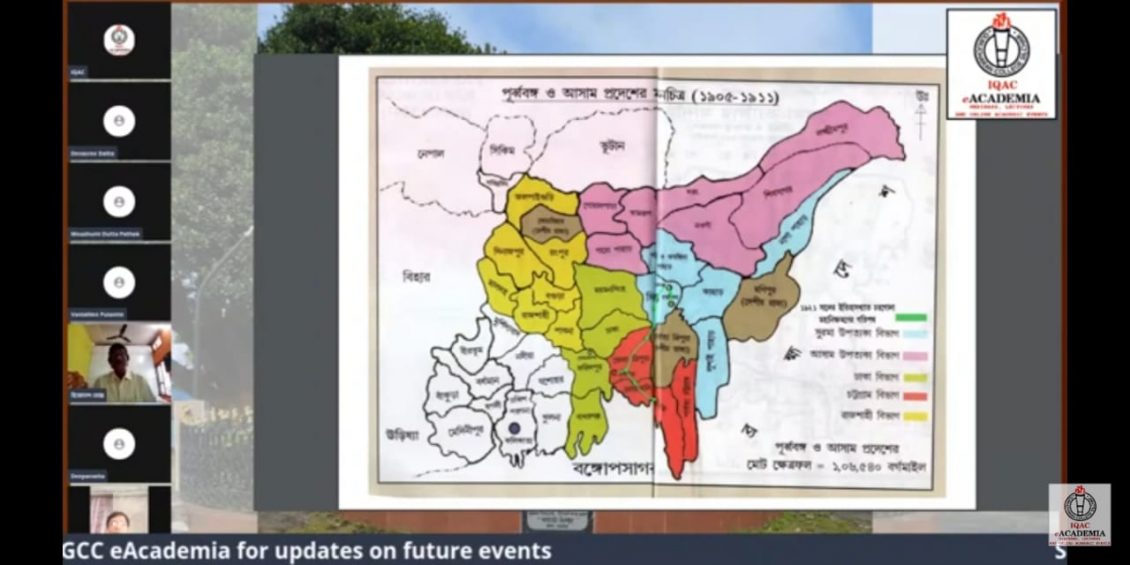 Prof. Datta, who is also an alumnus of GC College added that the labourers were mostly migrated in country boats and goods trains. Packed like goods and animals in those means of transport, even the privacy of women were not respected. They were not even provided with food and water properly during their month-long journey and for those conditions, many workers died over the years even before reaching their destination. These tea labourers popularly known as ‘coolies’ were kept separate from the outside world by constructing barracks and boundaries around the tea plantations, locals were also not allowed to enter those plantations. The planters also had established secret jails in the name of ‘discipline house’, to imprison runway labourers. Adding to the information about the exodus shared by the previous speaker, in her concluding remarks she mentioned that when Congress workers organised meetings and sabhas for the tea garden workers to protest against the oppressive British owners, the maximum participation was of women labourers who demanded maternity leave, privacy and flexible working time. They also raised the slogans of “Jai Hind” and “Congress ki joy”.

Dr Moushumi Dutta Pathak, the departmental head of History, Arya Vidyapeeth College, Guwahati, spoke on the topic “Exploring dissent in the Empires’ Gardens”. In her deliberation, she began with the discovery of tea in this region of the North East and the shift from Chinese tea exports. She also explained the way in which Assam Tea became not just the most popular variety but also the most important to global trade. Supplementing the previous speakers, she also mentioned the ‘Sardari System’ of labour recruitment, where the Sardars would go to their villages and hire labourers who would work under them and this system works till date in the tea gardens of Assam. Sardars would lure the poor people with tall talks and promises and such incidents even lead to the starting of folklore culture and songs and ballads like “Cholo mini Assam jai re, Assam ete koto shukh re” mentioned in the works of Ramkumar Vidyaratnam and his book “Coolie Kahini”. She also introduced the term ‘black tribals’ which were used later to refer to these labourers because the term ‘coolie’ was derogatory. It is often ignored that these workers had to work very hard every day throughout the year without any holidays and they were also treated very badly, separated from the outside and whatnot. To make it even harder for them to leave and run away from the garden the plantation owners introduced strict regulations, penal laws, illegal confinements and there was one more system that became operative, “the chowkidari system” or the system of watchdogs to look over the workers so that they could find the faults even if it was minimum and punish them for it. 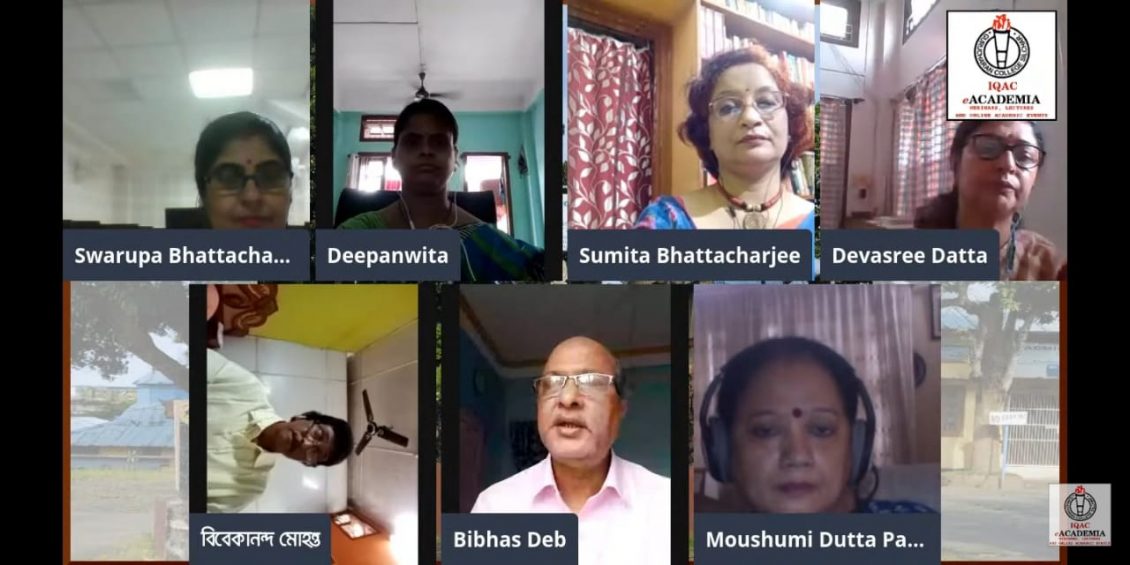 Then the esteemed speaker raised the question that, even with so many restrictions and strict measures how could the illiterate and poor labourers could mobilise themselves in union and resist the English forces in Chargola in 1921? In answer, she mentioned a stark difference of the subsidised prices of rice between Assam Valley tea gardens and Surma valley tea gardens. While it was three rupees in the former gardens, the price was double in its later counterparts. Also, the post-war period saw a great slump in the tea gardens. This slump lead to the cutting down of wages and some labourers even were thrown out of work. The workers had to beg for work to fill their stomachs but when refused they had to consume very inferior quality rice and food. All these incidents made a common opinion of detest among these workers and to oil the fire was the ongoing railway workers protest in the nearest train station. They also had the same motive, raise in their wage and their protest lead to the fulfilment of their demands. At the same time, Mahatama Gandhi came to the national scene and his popularity was starting to soar. He asked people not to drink tea, which impacted tea production also. Since demand was falling, the production too fell and so did the number of labourers required. All these forces lead to the rise of anger among the labourers and finally on 3rd May 1921 they started leaving their tea estate in large numbers. Very interestingly the first workers to leave the garden were the women and later they were joined by their male counterparts.

In her concluding remarks, Dr Swarupa Bhattacharjee, HOD, Department of Political Science, GC College quoted from the research work by Sanjay Kumar and the emotional value attached to the labourers leaving their place of work. The involvement of women was also highlighted by Dr Bhattacharjee beautifully and ended with the expectation that research and further studies regarding this exodus would continue and that would be the success of the webinar conducted by her department and the college.

The session which lasted for three hours without any interruption was ended with the vote of thanks by Dr Sumita Bhattacharjee, professor of the Department of Political Science of the college. Dr. Vallalien Pulamte, Prof. Deepanwita Dey Purkasthya and Sukanta Sinha from the department were also present in the webinar.