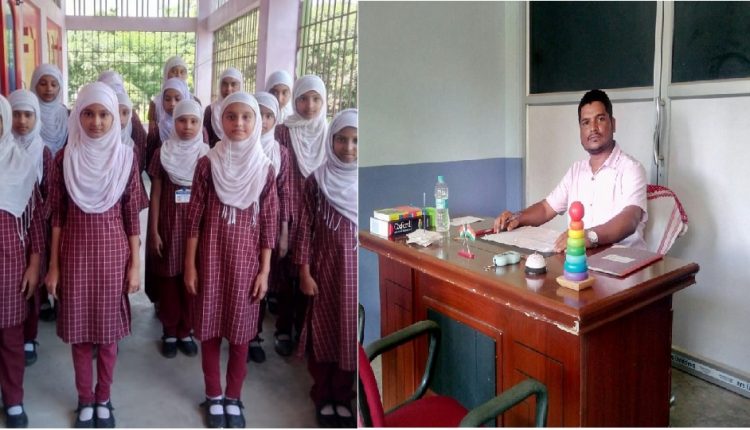 Hijab made compulsory in a school in Barak Valley; decision withdrawn after receiving flak

In a school in Barak Valley, a senior teacher made Hijab compulsory for all the girls studying in the institution. After announcing his decision in the school, the teacher, AB Hannan wrote on Facebook, “To protect my students from evil eyes and as a part of best personality of girls, today I made compulsory wearing Hijab for all my girls students at East Point Public School, Karimganj.”

East Point Public School is accreditated under Secondary Education Board of Assam and this campus where the decision was taken is located in Bahadur Shah Jafar Road, Kanishail, Karimganj.

Speaking with Barak Bulletin, Hannan said that ill-mannered boys in the neighbourhood harrass the girls studying in this school and in order to save the girls from those evil-minded people, he had taken the step.

Hijab is a religious dress-code for the ones following a particular religion, whereas, the school is open for all and registered under the state board which has its own guidelines for schools when it comes to the uniform. When asked if imposing a religious dress code in a public school won’t create a problem as it is open for people of all religious background, Hannan replied, “At this stage, 100% of our students are Muslim and so when I took this decision, I said in future if any Hindu students get enrolled we will see what we can do.”

He also added that the students themselves welcomed the decision. “We have a subject called Islamic studies and it motivates students towards spirituality. While in that class they themselves cover their head, something that we see women doing during Azaan (prayer) or in front of temples,” he added.

His Facebook post received mixed feedback. While some appreciated the step, others criticised it terming it a narrow-minded act. Hannan informed that today the school management had called for a meeting and it was decided that this step to make Hijab compulsory should be withdrawn immediately. At the same time, Hannan informed that he was instructed by the management to delete the post and issue a formal apology on the social media.

Following the instruction, Hannan deleted his earlier post on Facebook and wrote a new one in Bengali which translates to, “The school administration has refused to give its green signal to make Hijab compulsory and so it remains optional as it was. Since my earlier post making Hijab compulsory hurt many, I am deleting it with an apology. Jai Hind.”

Even during his conversation with Barak Bulletin, Hannan apologised. He said, “I thought it would be a step in the right direction and save the girls from the harrassment they go through. However, I admit I was wrong. People whom I consider as my well-wishers got hurt by my decision to make Hijab a compulsion and I apologise to all of them.”

Should you ask girls to wear longer clothes and cover faces in order to save them from evil eyes. Or should you ask your boys to behave properly and respect women irrespective of the size of their clothes? While there is no doubt one must do the latter, it is true that people still impose the former. This could have been another addition to the long list, however, the management stepped in and immediately took a decision to stop it.