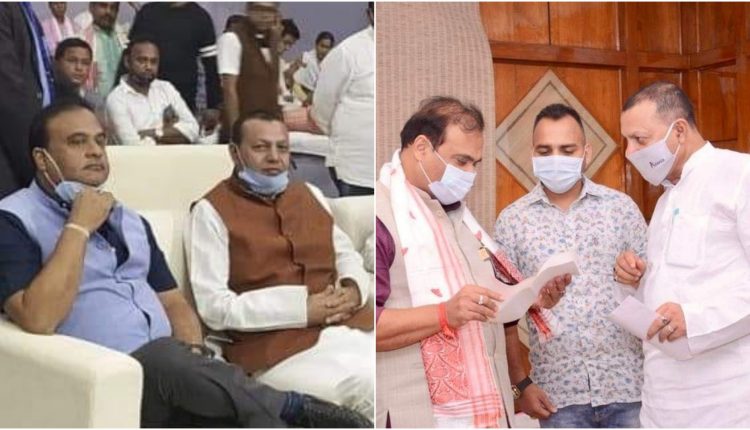 "Himanta Biswa Sarma got my treatment done for free in Delhi;" "Sathe asked me to pay Rs 5 crore for ticket;" Exclusive Siddique Ahmed

A south Karimganj MLA from Congress in BJP Government is otherwise inconsequential. But, in the last few days, no Prime Time news bulletin is complete without devoting a whole segment to Congress Siddique Ahmed. Three-time MLA and former minister, Siddique Ahmed didn’t get so much press during his prime in Assam Politics.

Siddique Ahmed has been suspended by the Assam Pradesh Congress Committee for intentionally wasting his vote during the Rajya Sabha election held recently in Assam. Apparently, instead of writing “1” he wrote “One” to waste his vote.

He is being called a “Dalal” and there is a cloud of uncertainty looming large over his political future. Will he switch sides to join his former colleague Sushmita Dev at Trinamool Congress or his other “frenemy” Himanta Biswa Sarma in BJP? What exactly is his problem with North Karimganj MLA, Kamalakhya Dey Purkayastha. Here is an exclusive interview with Siddique Ahmed, the controversial man in Assam politics.

How are you doing, Mr. Siddique Ahmed?

I am doing fine…

You are silently sitting after creating such a rift in Assam Politics?

I took part in the voting process and did cast my vote diligently. It is they who created the ruckus in a bid to make me the scapegoat.

You are blaming Sathe (Prithviraj Sathe) and Kamalkhya Dey Purkayastha for the entire saga, but how did they become your enemies within the party?

Look, before the general elections to Assembly, Sathe asked me to pay him Rs 5 crore for the ticket. I refused to pay for the ticket and since then, he has been after my life. He was always in search of an opportunity to cause me trouble. He is just using this opportunity.

Okay, and what about Kamalakhya?

He has been campaigning against me within the party for a very long time. When Gautam Roy was influential in the Karimganj Congress, Kamalkahya Dey Purkayastha teamed up with him and started working against me. Why he does it is something I could never figure out because I never worked against him. Also, after he became the Working President of Assam Pradesh Congress, he started believing that Congress and Congress workers should as per his orders.

But it was heard that Kamalakhya Dey Purkayastha wanted you to get the Congress ticket from South Karimganj?

Absolute rubbish! He wanted my name to be chopped out from the list of candidates.

You are saying that you have voted diligently, then what is the root cause of this entire saga?

After casting my vote, I went to the party office and sat for hours. We were chit-chatting about many things among us. Not a single person pointed fingers at me to say that I have wasted my vote. In fact, agent Nurul Huda went on to give a press statement confirming that all Congress legislators have voted for Ripun Bora with exception of Shashi Kanta Das. All of a sudden, out of the blue moon, Sathe started saying that I have wasted my vote.

You have threatened to file a case against Congress…

That is not a blank fire. I was not saying it just for the sake of it. I will go to the court but before that, I want to inform the party’s leadership about the chain of events and wait for their response to it. Following the response, I will decide the future course of action.

Are you planning to join any other political party?

For the next three years, I want to continue as an Independent MLA and serve the people of my constituency. After my term as the MLA concludes, I will decide what to do.

But there are rumours that you are joining the BJP…

Politically, it makes no sense for me to join the BJP. The demographics of my constituency won’t permit this switch and that’s easily comprehensible.

Nope! My time at that party is all but over.

How about joining your colleague Sushmita Dev in Trinamool Congress?

I don’t have any interest in Trinamool Congress either…

Don’t you think it will be difficult for you to continue as an independent MLA?

No! In fact, I believe, as an independent MLA, there is far more scope for me. When you are a Congress legislator, it is difficult for you to get sanctions from the BJP Ministers. As an independent, life becomes easier when you are approaching several ministries to get the work done at your constituencies.

This is what Kamalakhya Dey Purkayastha is saying, just to maintain a cordial relationship with Chief Minister Himanta Biswa Sarma, you have backstabbed the Congress?

See, I have always had a cordial relationship with Himanta Biswa Sarma and this is not recent, but we have shared a bond for over two decades. This is separate from party politics. Let me inform you when I had suffered a cardiac arrest, It was Himanta Biswa Sarma who had sent me to Delhi and got my treatment done without any cost. When I wasn’t an MLA for five years, Himanta Biswa Sarma helped me in many ways.

To take this relationship further, if you join the BJP, won’t your voters (primarily the minority community) get dejected?

By spreading some misinformation and lies, they want to mislead the voters of South Karimganj. But, I know for sure that the voters of South Karimganj are smart enough to not get carried away by this propaganda. On the other hand, there are many places in Assam where effigies of Kamalakhya Dey Purkayastha and Bhupen Bora are burnt by the Congress workers. You won’t find such instances in my constituency.

After your suspension, did you get a chance to speak with Congress leaders?

Yes, many called up.

If tomorrow, APCC president Bhupen Bora calls you, will you forget all that has happened and join the party?

No, the Indian National Congress has no future. Look at the district congress headquarters in Cachar and Karimganj and how it has turned into a joke. Mark my words, Congress will never form a Government in Assam ever again.