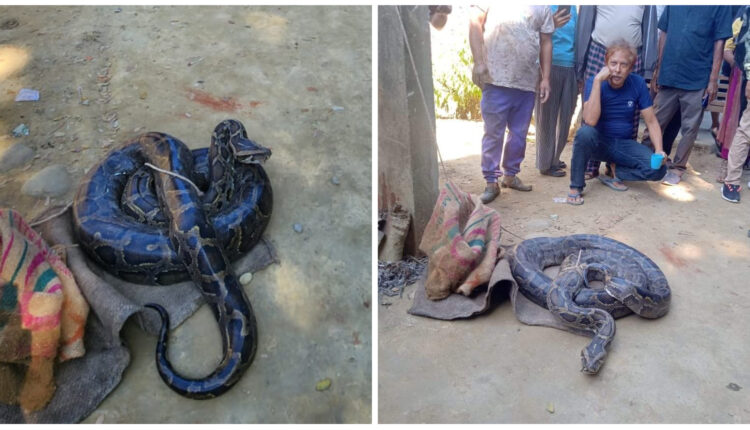 In Cachar district, there is a significant surge in the number of pythons being rescued from human settlements. Especially in the last one month, as many as six cases of python-rescue have been reported.

Recently in Sonai area of Cachar district, a huge python was caught by local. Mobile cameras surrounded it and as soon as people got enough content for their social media feeds, they left. Two residents of Hmarkhawlien area in Cachar stayed back. They weren’t bothered about the social media feed.

Both of them made an offer to buy the python from the custodian of the reptile. If sources are to be believed, then they go hold of the python for Rs 1200. They brought it to their village and Lalthomlien Neitham Chairman, Barak Valley Hill Tribes Development Council, Assam got to know about it.

He understood that the python’s days on earth are numbered to just a few hours. He immediately made an offer to purchase the reptile from the Hmarkhawlien residents at a higher price. They agreed and sold it to him.

Lalthomlien Neitham then discussed the matter with the Cachar Forest Division and eventually released the python in the forest.

The two Hmarkhawlien residents confessed that they bought the reptile to make a meal out of it. Timely intervention from Lalthomlien Neitham managed to save the reptile. However, this incident makes it clear that pythons are being cooked and eaten in parts of the Cachar district.

How the Cachar Forest Division looks into the matter is something that remains to be seen.