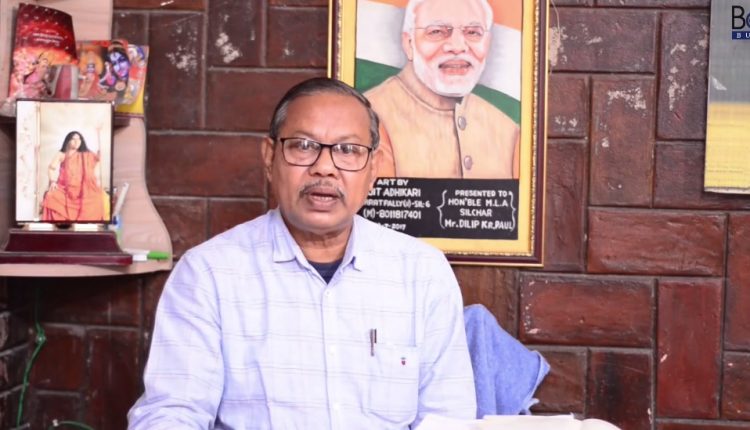 "How much do we respect our own mother tongue?" MLA Dilip Paul throws a question at critics

11 months after signing the Bodo peace accord, the Assam Cabinet in December 2020 passed a bill to make Bodo the official associate language of the state. Since then the demand for recognising Bengali as an associate language was raised by many.

Diverting away from the question, Paul said the Bengalis living in this region need to “introspect’. “22 crore’s Bengali cannot be destroyed by any external force, if it gets destroyed, it will be destroyed by us Bengalis,” said MLA Dilip Paul.

He added, “In this region, we have parents enrolling their children to English Medium schools. Why? Can’t students study English in Bengali Medium Schools? There are many parents who boast with pride that their children cannot read Bengali script. Before talking about who is doing what with Bengali language, we need to introspect and ask ourselves what are we doing with this language?”

Citing the example of Satyendra Nath Bose he said, “We all know about the Bose-Einstein formula. This is for those who think Science cannot be taught or understood in Bengali. Satyen Bose is a famous scientist, isn’t he? In Germany, there is no English, German is the language spoken by scientists, same is in France… are they inferior to English speaking nations when it comes to science and invention?”

In this new episode of Straight Upfront, Silchar MLA Dilip Kumar Paul talks about the political scenario encompassing #BarakValley. He also comments on the Barak Brahmaputra divide, unemployment, state of #Bengali Language in #Assam, and the upcoming elections.