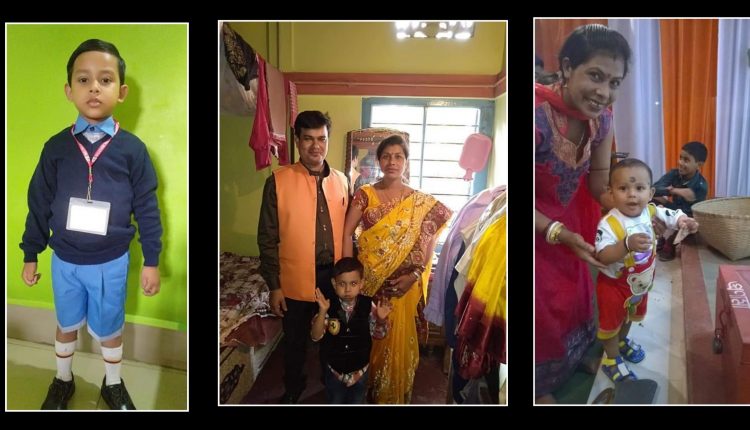 "I did not lock the door from outside," Sarbari Nath on the fire in Ambicapatty

February 29, 2020, at around 2:30 PM flames were spotted at a multi-storey residential building in Ambicapatty Silchar. Within moments, it was known to all that a four-year-old has succumbed to the fire and the househelp has been rushed to the hospital. Since then, much has been written about the incident.

It turned out that the survivor is actually a relative of staying as a caretaker. Her father, while speaking with Barakbulletin shared his side of the story and what he heard from his daughter who has now lost her speech.

The flat is registered on the name of Sarbari Nath, a government employee and mother of Ratnadeep Nath, the four-year-old who could not survive. Sarbari Nath opened up while speaking with Barak Bulletin and said she was deeply hurt by the reports that have been published by media publications. Throughout the conversation she kept crying yet she answered all the questions thrown at her.

We have spoken with many people so far and asked about the incident, would request you to explain it to us, what actually happened?

How do I explain what happened that day, it is by far, the worst day of my life. I had finished all the household work and then left for office as usual. On my way out, my son asked me for a pulse toffee. I gave him the candy and turned on the television set, he walked me to the lift and said good bye to me. Little did I know that it was the last time I would see my son.

How did you get to know about the fire?

I heard the fire engines wail their siren and we discussed among our colleagues that somewhere there must be a massive fire. Within a few minutes, I got a call from my neighbour that there is a huge crowd in front of our flat and I must immediately take a stock of the situation. I called my neighbour and the little kid there said that there is a massive fire inside my house. I rushed there and I saw that the firemen are yet to splash water in my house. My neighbours said that my son and sister-in-law has escaped the fire, however, I had my doubts and I thought they were inside.

How were you sure that they were inside the house, is it because you have locked the door from outside?

No I did not lock my house from outside, why would I do so? No mother on earth will lock her child inside and leave for work. Earlier, I used to take him along with me to work and now that my sister-in-law was there, I left him at home with her. They stay together for a while and then my husband returns home at around 1:30 PM.

Okay. There was another rumour that your son called you and informed that there was a fire inside and you must save them, even DC Cachar made a comment on that…Did he call you?

No! Nothing as such happened. This is just not possible because the phone that was there inside had no sim card in it. Moreover, the android phone that my son was accustomed with was in my bag very much with me. My son did not call me and say that there is a fire at our home and I must save them.

What do you think might have happened that the maid could not walk out from the house with your son? Or escape the fire?

Even I have the same set of questions. Why did she not escape the fire with him? I heard that she said, my son held her hair and said save me save me, so why didn’t she take him along with her wherever she went? What stopped her from taking him to the bathroom with her? If she has tapped on the shower in the bathroom to splash water, then she could have taken him along and they both could have survived. Would like to state here that, the person inside was not a maid that we had employed, she is my sister-in-law (amar jamai’r pistoto bhon). Because she was there, I left my son at home, or else I take him along with me to office.

Do you find it tough to believe that that fire became so big within moments that they could not walk out?

Yes, I am astonished, surprised, shocked and at the same time, I have lost all that I had…

The bathroom at our flat is located between the rooms, there was ample water available, why didn’t she just splash some water on him, in fact, why didn’t she take him out of that room to some other room where the flames were not spread to that extent. She survived the fire, why couldn’t my son?

Was there a tiff between you and your sister-in-law? How was the relationship? Did you meet her after the incident to ask her these questions?

No, there were no tiff between me and my sister-in-law. In fact, my son was also fond of her, he used to address her as aunt (pishi). I used to take her along with me whenever I went to attend an invitation. I bought her new clothes and other ornaments too. After the incident, I could not gather the courage to ask her these questions. Moreover, she has lost her speech and is in pain herself.

Yes it is true that her elder sister used to stay with us. She got married and now she stays with her in-laws. Recently she visited us with her husband and child. Now, you tell me, if
I did not share a cordial relationship with her, why would she visit us with her husband.

Did you get her to help you by handling the household work and taking care of your child?

No, it is not like that. Actually, about three and a half, four months back, the elder sister who used to stay with us before visited us with her son and younger sister. That is when she started staying with us. She was unwell back then and I took her to the doctor, got her CT Scan done and she recovered completely. She started staying with us to get herself cured and then apply for a job at Police. We did not keep her with us to take care of my son or do our household stuff.

How is your husband doing now, are you both staying together?

No my husband is at his home at this stage and I am staying with my sister. On fourth day, there was ritual done at my father-in-law’s house, there my sister, brother-in-law and other went to take part. On their way back, they dropped in Silchar Medical College and Hospital to check on my sister-in-law. My husband is also there, they all are trying to ensure that she gets necessary medical attention so that she recovers fast.

What do you think was the source of the fire?

I have no clue about the source of the fire. As told by my sister-in-law, the lamp in front of idols (Prodip) is the source of the fire. That day, I had some sanitation issues and that is why I was unable to offer puja and I had to tell her. Normally, I ask her to blow off the lamp and categorically mention it to her that she must keep him with her… always.

Is there something more that you would like to say?

Yes. A lot of speculations are spreading almost everyday, those are hurting me a lot. The theory of the door being locked from outside – there is no truth in it. There is another one – that my relationship with my sister-in-law was on the edge – there is no true on that either. Actually, her elder sister was a little problematic. She fell in love with a guy while she was staying with us. She used to speak with that guy over phone for hours and that is when I being a woman understood that there is something going on. I told her that she must communicate it to her parents or else I will have to do it as she is staying with us. She got married by herself and that is it.

Did her younger sister who used to stay with you had similar behaviour?

Her younger sister is not like that. She is very good, well-behaved, soft-spoken and we share a very cordial relationship. In fact, I myself asked my husband to go to the hospital and check if she was recovering well. I have lost all that I had, now it is my only request that one must not spread rumours because people come and ask me for clarification and with this state of mind, it is very difficult to do so.

Here is the story of Silchar's Ranjit Das, a self-trained flute-maker offering a…