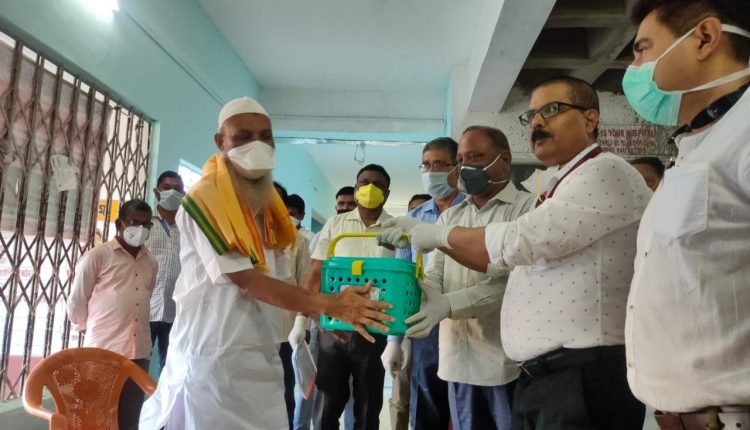 On March 31, 2020, Assam got to know about its first COVID positive patient. He happened to be a 52-year-old resident of Karimganj district. Soon his name, travel history, and connection with the religious congregation organised by Tablighi Jamat at Nizamduddin, Delhi was unveiled. From breaking news, Mufti Jamal Uddin became the headline on the front page of newspapers, prime time debate on television channels. Gradually, the Jamat emerged as a viral vector in India and was the talking point in Assam too. Mufti Jamal Uddin got discharged on May 6, 2020, after successfully battling the disease and testing negative.

In an exclusive interview with Barak Bulletin, Jamal Uddin shared his journey to the COVID block and life after being discharged. Speaking with senior correspondent, Biswakalyan (Tilak) Purkayastha, Jamal Uddin said he felt he was mentally harassed while undergoing treatment. He appreciated the efforts put by doctors, nurses, and medical staff at Silchar Medical College and Hospital but expressed his disappointment in the manner the administration handled his privacy. He spoke about his family, other patients around him, and many other aspects…

Congratulations, you have fought Coronavirus and come out victorious. Share your experience with us…

Thanks a lot. But I have my doubts, if I was at all infected by Coronavirus.

What do you mean to say?

Look, they have tested so many people who came in contact with me. Not a single person from the lot tested positive. I am a blood cancer patient who was suffering from cold, cough and fever. In fact, in my discharge slip, it is written that I was treated for cough and fever. So I would say that I do not think I was infected by Coronavirus.

How was the health care facility? Did you feel comfortable in the COVID block?

The medical staff and principal were really good. They did everything possible to ensure I feel comfortable and at the same time, I must thank the health minister of the state, Himanta Biswa Sarma too. While I was there, he called me and we had a video conversation. I wish everything was a little more planned and the arrangements were done keeping the patient at the heart of it.

This is a pandemic that no one ever thought of, so it is natural that everything is not planned. You have spent a good period of time in the hospital how was it when you stepped out?

See, when I say planned, I don’t mean arranging a better bed inside the ward. What I am trying to say is that the way we were treated could have been more humane. The DC and the administration announced my name in public, it was all over making headlines. Somebody should have thought about our privacy. By announcing my name in this manner the administration has put me in a position where discrimination is obvious. With my first-hand experience I can say that this disease puts in a lot of mental pressure. After you see your name has been made public, it just becomes worse. I understand it is a new disease and we are in the middle of a pandemic but the mental health of a patient should be kept in mind. I felt mentally harassed, I felt I was punished.

How did your family react when they got to know that you have been infected by the virus?

I already mentioned that I have my doubts if I was at all infected by Corona and I reiterate again. Coming to the question of my family, they were kept in isolation too. In the initial days they did not have clothes and basic amenities that one needs to survive. Once they reached home after testing negative, they had to face a lot of discrimination. People did not talk to them. Nobody would come close and I am sure it was mental stress for them too.

There was a felicitation when you got discharged. Did you communicate it to the administration that you feel mentally harassed?

Yes, I was felicitated by the administration and the hospital authorities. Nothing against the doctors and the medical stuff, but to the administration, I would like to make it clear that first you harass mentally by declaring the name again and again and making me look like a villain, and then you felicitate. What is the point of doing that? If it is some sort of balancing act then let me assure you that the felicitation does not cover up for the harassment.

You were alone initially but then a patient from Hailakandi and Cachar joined you respectively. Did you feel better when you met them?

The patient from Cachar was completely asymptomatic. The Hailakandi patient was suffering from respiratory issues, he said he has been suffering from breathing problems for a long period of time. I have my doubts with regard to his medical assessment too. I don’t think he was infected by Corona either.  He died there and then he was buried by the administration. It was very sad and I used to wonder if I die they will bury me the exact same way, it would chase me like a nightmare.

Hailakandi administration followed the protocol followed everywhere else in the world. This is what experts, doctors and scientists suggest as best practice…

I am not blaming anyone. I agree that there are doctors and scientists and we must follow the protocols and their advice. But I believe at the end of the day, everything is what the Almighty Allah wants for us. Many survive a pandemic and many do not, it is all up to Allah. So, what I have an issue with is the brute use of force and Police to ensure that the protocol is followed. Explain the protocol and leave rest for the individuals to decide depending on their faith. Let’s not create a jail-like atmosphere that people feel like running away. I am not saying do not follow what the doctors are saying, we must follow that for our own good.

Do you regret visiting the religious congregation organised by Tablighi Jamat in Nizamuddin Markaz?

There is no question of regret out there. I have been going there for 30 years now. This year many foreigners attended the congregation as they always do. I understand the outbreak was spotted earlier this year and maybe a few people got contaminated during their stay at Markaz. But I don’t believe that it is the Markaz that has spread the virus in the state and all around the country. How many people got infected for coming in contact with me? Nobody. Accidentally, 20 or 30 among the thousands and thousands of the people might have got infected but putting the blame on the Markaz for the spread of the virus in India is not right.

Not 20 or 30 but more than 4000 (attendees and contact) confirmed cases have been reported so far. What happened after you returned from the Markaz, did you hold local meetings to aware people of the Markaz since you are a Mufti?

Yes, so there was a congregation in Aathgaon, Guwahati where people from all the districts of Assam who could not travel to Nizamuddin had gathered. People from Barak Valley also went there. In these conferences, spirituality is highlighted and it takes place every year. That was a local congregation. Don’t confuse Mufti with Aamir, there are many Muftis in one district but there is only one Aamir.

We understand you are disappointed at the way the administration dealt with the scenario. Any message you want to leave for them.

I must admit that the principal, doctors and the staff at Silchar Medical College and Hospital took great care. Also, the day I was released, Health Minister Himanta Biswa Sarma called me with his team and had a video conference. I would be lying if I say I was not attended well. However, mental stress remains a concern. Also what is a concern for me is that my phone was seized by the administration on April 12, 2020, and I am yet to get it. I spoke with Karimganj SP and he said it is something that comes under Cachar SP’s jurisdiction. I sent an application to Cachar SP, he did not accept it but said he’ll look into the matter immediately. I am yet to receive my phone.

Note: The interaction was done in Bengali and the English version is a translation based on our interpretation.

Rajdeep Goala announces he'll join BJP: "To Congress, I would say all the best, will…