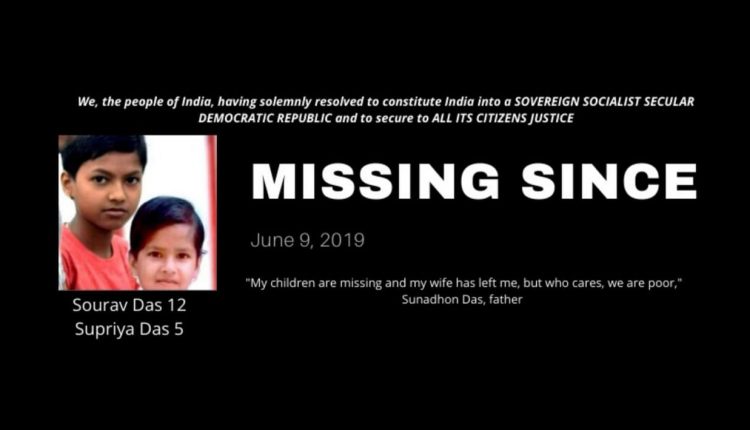 "If they are alive, pray they are safe and if dead, may their soul rest in peace," father of Sourav and Supriya Das

“I do swear/solemnly affirm that I will be faithful and bear true allegiance to India and to the Constitution of India as by law established, that I will uphold the sovereignty and integrity of India, and that I will carry out the duties of my office loyally, honestly, and with impartiality.”

This is the ‘Oath of Allegiance’ that public servant, IAS, IPS swear to before assuming their offices. This is the same oath that MPs and MLAs take after getting elected as public representatives. The preamble of what they swear to uphold states “WE, THE PEOPLE OF INDIA, having solemnly resolved to constitute India into a SOVEREIGN SOCIALIST SECULAR DEMOCRATIC REPUBLIC and to secure to all its citizens: JUSTICE, social, economic and political; LIBERTY of thought, expression, belief, faith and worship; EQUALITY of status and of opportunity; and to promote among them all FRATERNITY assuring the dignity of the individual and the unity and integrity of the Nation.”

We are in the age of ‘Beti Bachao Beti Padhao’ and ‘Sab Ka Saath Sab Ka Vikas’. But for Sunodhan Das, a vegetable vendor living in Silchar – Ashram Road’s Tapoban Lane, it is a dark scary hollow, and depressing life. On June 9, 2019, exactly a year back, at around 7:30 he got the news that both his children are missing. 12-year-old Sourav Das and 5-year-old Supriya Das were last spotted with their mother Somobala Das near Deputy Commissioner’s office in Dakh Bungalow road. After that, both went missing and hell broke for their parents.

The police investigation began and after 20 days, Somobala Das got arrested for allegedly selling her children. However, within a few days, she was released. “Police officers came to me and asked me to sign on a paper. They said it is a document necessary to investigate and find my children. I had no clue what I was signing on and later I found out that happened to be a complaint against my own wife,” says Sunadhan Das, whose children still remain untraced.

It is not only Das who is questioning the Police’s role. On September 26, 2019, youth Congress leader, Abhijit Paul submitted a memorandum to the additional deputy commissioner Cachar. Paul said there are two statements lying at Silchar Sadar Police station which contradict each other and therefore put the Police’s actions under question. According to him in the first Police complaint lodged by Sombala Das, it is mentioned that “Unidentified individuals kidnapped her children from the turning near Elora hotel in Silchar.” Shedding light on the other statement, which was signed by Sunadhan Das, Paul said, “It is mentioned that Somabala Das sold her own kids,” basis of which she was jailed and eventually released.

“My wife has never been the same after being released from the Jail,” cries Sunodhan Das. He adds, “I have no clue what they did to her inside the jail, but she came out mentally disturbed. Now she has lost her sanity, forgets everything she says. Currently, she stays with her parents and I hardly ever return home which is dark and silent,” added Das.

They live in a colony of informal settlements deep inside Tapoban lane. The entire neighbourhood is aware of the incident that took place a year back and most of them have even learned to live with it. “Sunadhan and Somobala did not,” says a neighbour. “Often at nights we hear Sunadhan crying loudly. Both the kids were so jolly that everyone used to stop by their house at least once… no one even stands for a glance anymore,” adds the neighbour.

What happened to Sourav and Supriya is still a mystery, but Sunadhan has decided to leave it to “God’s will”. “I have bills to pay and debts to clear. Moreover, I am in loggerheads with my in-laws who think I have intentionally conspired against my wife, which forced me to sell two Katha land that I owned. After a point, I had to gather strength and start selling vegetables again,” said Das.

He did not give up without a fight. Sunodhan and Somobala Das went from pillar to post, knocked on many offices for help but only got empty promises. After they weren’t offered any help they decided to sit on hunger strikes, first in November when the Police took 20 days’ time from them and then in December when they were detained using force.

However, after the December protest, an official from Cachar Police took Sunodhan Das to Garia Railway Station in West Bengal based on a tip-off. “We went there and thanks to the administration and political leaders for facilitating it, but it was of no use. Whatever information we had turned out to be false. After returning from Kolkata, I decided to leave it to God’s willingness. I pray every day, pleading to get my children back to me. If they are alive keep them in good hands and if they are dead, let their soul rest in peace.”

A senior journalist cum social worker on the condition of anonymity opines that it is a collective failure as a society, and Police and administration must not be blamed in isolation. “Where are those who claim to be fighting to protect and preserve the rights of Hindus. Aren’t they Hindus? How many protests have we noticed? The liberals who are writing pages after pages portraying the plight of migrant workers, how many articles did they write on the missing children? Congress’ national president of the women wing is former Silchar MP, how many times has she raised this matter sitting in opposition? No one gains anything from this and so this will die a slow death as did the case of Nega Bagti …” concluded the journalist.

“My children are missing and my wife has left me, but who cares? We are poor and we do not matter enough to anyone…” says Sunadhan Das, with tears rolling down his face.

“Injustice anywhere is a threat to justice everywhere. We are caught in an inescapable network of mutuality, tied in a single garment of destiny. Whatever affects one directly, affects all indirectly,” wrote Martin Luther King Jr in his Letter from the Birmingham Jail. We shall end this on the same note.