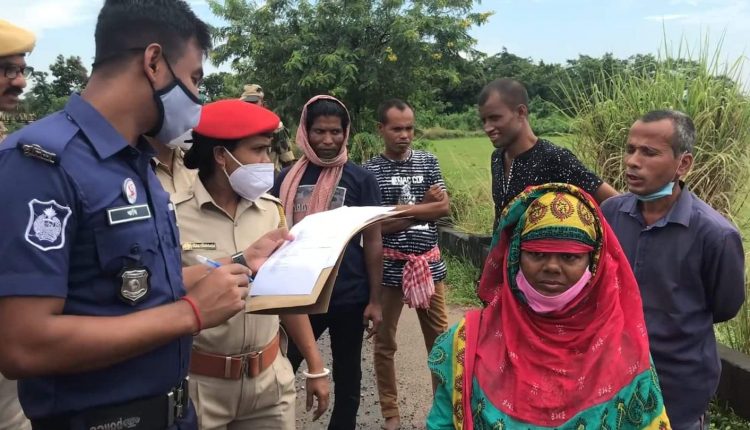 Six Bangladeshi nationals have been deported to their country of origin through the Sutarkandi Beanibazar International Check post on Tuesday. They were detained and kept behind the bar at several state jails for illegally trespassing into Indian Territory. Border Security Force (BSF), Border branch of Assam Police handed over these six people to the Sheola Immigration Police and Bangladesh Border Guards (BGB).

Inmates of deported people gathered around the Sheola Custom Land port premise after getting the news of their release from Indian Jails after a long imprisonment. These deported individuals have been identified as Md. Ibrahim of Subarnachar Police Station; Noakhali, Habib Mullah of Kolapara Badurtoli, Patoakhali; Hamirul Islam of Hathibandha PS, Lalmonihaat; Md. Kamal Hussain of Kishoreganj; Mosa Jahanara Begum of Jessore and Sahidul Islam of Bagerhaat.

It is being revealed that these people sneaked into India for better economic prospect through illegal channels with the help of brokers. However, they were nabbed by the BSF few days after their arrival. They felt a sigh of relief after deportation and were glad to meeting their family and inmates after long time.

Superintendent of Assam Police Bireshwar Sonowal, Custom Officer Samarendra Charaborty, and other BSF officials were present at their deportation at the Sutarkandi Sheola International Check Post. From Bangladesh’s side, this event was attended by Company Commander Monir Miya, Sub-inspector of Beanibazar Police Station Abdur Rab, and other officials of the immigration police.