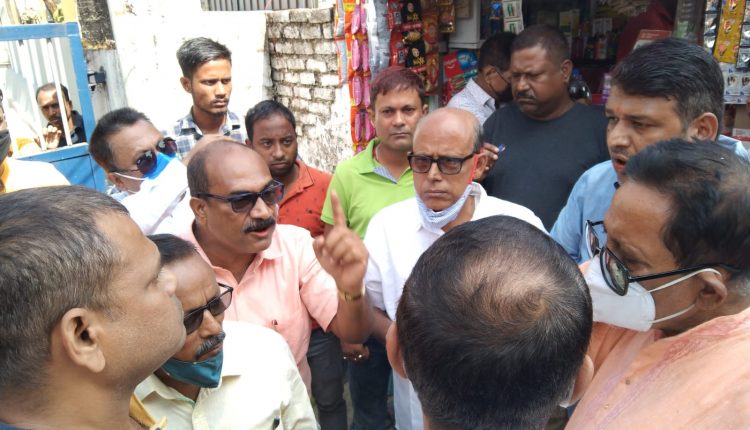 In the battle between BJP and BJP today at Silchar DSA, 'sports' loses

“Who are you?” This is what a BJP man said to Silchar DSA’s general secretary Bijendra Prasad Singh when he approached the main gate of District Sports Association, Silchar’s main gate today morning. “This committee is illegal,” added the BJP man.

What marks as a black day for the history of sports in Silchar, the association was forced to postpone the special general meeting scheduled today. Till 12 noon, none of the members managed to enter the association’s office as a bunch of protesters blocked the gate. They raised slogans questioning the integrity of General Secretary of Silchar DSA, Bijendra Prasad Singh, the elected committee and the process of election.

For the freshers, Singh was constitutionally elected as the general secretary of the Silchar DSA in 2019. Other members of the committee were also elected following a similar constitutional process. The ones protesting today got irked by the fact that Silchar DSA stripped off the membership rights of 20 organisations that remained inactive for the last two years. That was also done following the constitution of the association. The proposal to cancel the membership was tabled at a meeting where the members of the association voted for the cancellation and the same was done. Moreover, the Clubs and Colleges that lost their rights were allocated time to contest the association’s decision. So what explains the protest today?

The answer lies in the identity of the protesters. Most of the protesters belong to the Bharatiya Janata Party’s youth wing and were led by the Cachar District president of Bharatiya Janata Yuva Morcha, Amitesh Chakraborty. All of them maintained that they were protesting as common residents of Cachar and for the best interest of the general public. However, the close association of each protesters to the BJP makes it clear that this is was an issue within the party. It is worth mentioning here that Bijendra Prasad Singh himself is an active member of the BJP and head of Tarapur and Malugram Mandal. So, instead of bringing the tiff in front of the main gate of Silchar DSA, shouldn’t they have solved it behind closed doors?

When Bijendra Prasad Singh approached the protesters and tried to engage with dialogues and assurances, the protesters didn’t pay a heed. Kajol Roy and Amitesh Chakraborty instead got busy sloganeering. “Cholo DSA Dokhol Kori,” “Cholo Cachar Club Dokhol Kori” slogans too were raised to take a jibe at the committee. Astonishingly, Bijendra Prasad Singh was not only cornered by his party but none from the committee stood by him in the beginning.

Later, football secretary and president of Silchar DSA, industrialist and veteran sports administrator, Babul Hore questioned the protest. “Daru Hatao DSA bachao,” slogans targeting Hore irked him further. Babul Hore approached the Police official present on the spot and asked why is he unable to open the gate. Police officials stood and watched and so did all the commuters passing through the heart of the town.

The members of the District Sports Association, Silchar, former sports personalities, lifetime members of the association, all stood next to Hotel Kalpataru. Each time the protesters raised “Silchar DSA Hai Hai” Bijendra Prasad Singh screamed “Long Live Silchar DSA” on top of his voice. Eventually, the meeting had to be postponed. There were three important agendas up for discussion. 1. The response to the Assam Olympics Association’s letter and certain amendments to the constitution following the letter. 2. The approval of names proposed for a lifetime membership. 3. Discussion on the new logo of Silchar DSA.

Singh tried to communicate it to the protesters that today’s meeting is not related to the cancellation of membership. The protesters had their agenda and they didn’t listen, instead said, “Who are you?” A day would come when Bijendra Prasad Singh would be asked “Who are you” at the gate of Silchar DSA is something that hardly anyone would ever imagine. Besides being an administrator, Singh has been one of the best cricketers to have ever played for Cachar. Not only in Silchar, but Bijendra Prasad Singh has also held Cachar high while playing for the District in other parts of the State. After retirement, he started helping emerging sensations and all recent Ranji players hold high regard for the player. Prakash Bhagat, arguably the best bowler to have played the game from Cachar dedicated his entire career to the support of Bijendra Prasad Singh. And many other cricketers have done the same. So, a high decibel “Who are you” while pointing the finger towards Bijendra Prasad Singh is not only an insult to him but to the entire fraternity. This sums up today’s dark episode at Silchar DSA. In the battle between BJP and BJP today at Silchar DSA, Sports loses.

"Individual" moves to District Court against Assam Olympic Association for…