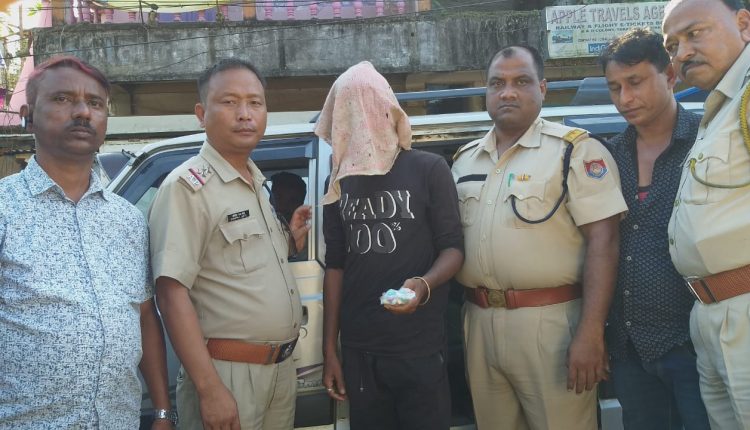 Breaking news coming in from Silchar. A while back, IC-Tarapur Police Outpost, Joseph Zate seized 22 packets of suspected “narcotic drugs” from the possession of Saidul Islam Laskar, son of  Nurul Islam Laskar of Salchapra Gagrapar pt. II. Police said that based on a secret tip-off they conducted a raid in E&D Colony, Tarapur, Silchar where they caught Saidul Islam redhanded with the suspected narcotics.

Speaking with our correspondent, Zate said, “We have our sources in the ground informing us about all these illegal activities. There is a racket that operates here and we are certain that we will be able to nab them all.”

In another similar raid, a veteran drug smuggler identified as 27-year-old, Abdul Basit son of late Abdul Noor a resident of Chandinagar Part I, located in Katigorah was apprehended.

Police apprehended Basit yesterday from Amtola Bazar. The officials dealing with the case informed, “Following interrogation, Basit confessed that he had concealed drug materials near Hillara pump. Later he agreed to cooperate and guided us to the hideout. 5 grams of suspected heroin has been seized from that spot.”

The Police department in its media statement said, “In this regard PS case no 772/2019 u/s 21(a) NDPS act has been registered in Katigorah Police Station. The accused has been arrested in connection with the case and is being forwarded to the court of CJM Silchar today.”

Recently, in an interview with Barak Bulletin, SP Cachar, Mugdhajyoti Dev Mahanta said that these drugs do not have a high market value in Silchar. “The demand is not that high” he had said. However, the market value surges when it is smuggled to Tripura and eventually Bangladesh. “We are committed to not let anyone use Cachar as a safe gateway to smuggle illegal stuff,” he said.

Silchar resident Joy Banik has allegedly jumped off from Sadarghat Bridge; Search operation is on