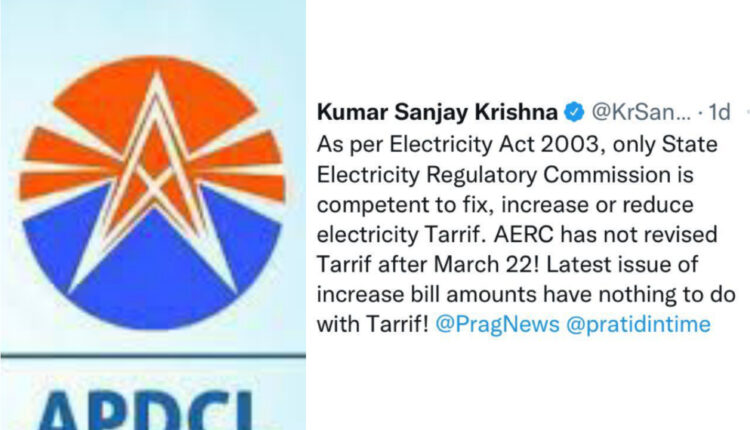 Raised electricity bills have been a talk of the town since the past few months. The matter came out in public after the bills for the summer months of this year doubled in figures. Many complained this being the fault of the newly installed smart meters while others said this was done to compensate the debts of APDCL. The power distribution company of Assam had to intervene in this matter and issue a public notice.

The blame was also put on the state government for increased tariff rates per unit but this matter was cleared by Kumar Sanjay Krishna, the former Chief Secretary to the Government of Assam. The former Chief Secretary said, “As per Electricity Act 2003, only the State Electricity Regulatory Commission is competent to fix, increase or reduce electricity Tariff. AERC has not revised Tariff after March 2022. Latest issue of increased bill amounts have nothing to do with Tariff”.

Smart metres were installed in Assam along with the rest of the country. These metres make the billing system automated. The smart electronic metres have remote reading capabilities which makes the billing system automatic. The notification published by APDCL read, “There are no differences between old static electronic meters and new smart meters regarding measurement of electricity as both of them follow the same BIS standards for electrical metrology”.

About the increased monthly bills in recent months the notification further read, “There has been significant increase in electricity consumption in the month of July and August 2022 due to scorching heat and less rain compared to the previous months. Moreover, the electricity consumption of all domestic consumers generally increases in the month of July, August and September every year across the State due to peak Summer Season”.

Clarifying the matter about smart meters, the company’s notification read, “APDCL has been installing smart meters in various areas of Assam since January 2020. Moreover, Ministry of Power, Govt. of India vide its gazette notification dtd. 17.08.2021 has mandated that all consumers shall be supplied electricity with Smart Meter in pre-payment mode in a phased manner within March 2025”. It further read, “Accordingly, APDCL has undertaken various projects for replacement of the existing meters of the Consumers with Smart Prepaid Meters. APDCL’s efforts have been appreciated by many consumers as these Meters are beneficial to the consumers only owing to the accurate measurement of electricity without any human intervention which results in preparation of correct bills based on actual consumption of electricity. With Smart Meters, Consumers can also track his/her electricity consumption through a mobile app (Smart Bijulee) and use electricity judiciously”. Smart Meters have also led to reduction of commercial losses and APDCL requests consumers to cooperate in this endeavour.