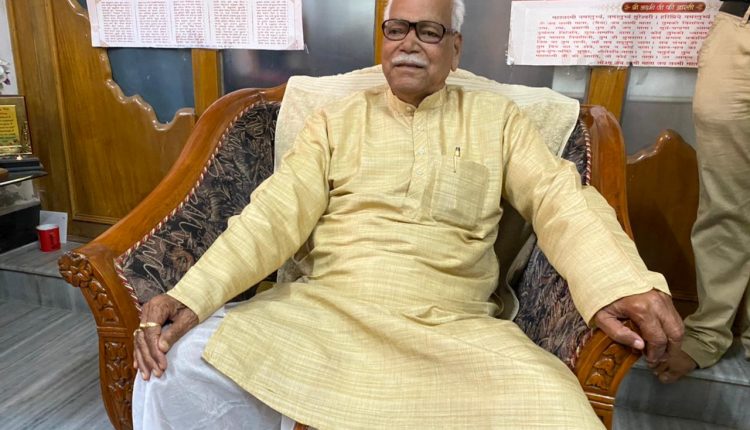 "It is because of Rajdeep Roy my son did not get a ticket," Kabindra Purkayastha; infighting in BJP before elections

BJP veteran Kabindra Purkayastha is stunned after son Kanad Purkayastha was snubbed by the party. Earlier today, he called for a press conference to address the matter at his residence in Silchar. The former union minister Purkayastha briefed the press about the party’s history and the role he had played in forming it.

He mentioned that former Prime Minister i.e Bharat Ratna Atal Bihari Vajpayee had entrusted him to set up the party in Assam. He reminded the journalists that it was at general secretary Samarendra Nath Sen’s house, the party’s first meeting took place. Kabindra Purkayastha himself was the convenor.

However, the press meet was not called just to remind journalists about the party’s history. From the very beginning, Kabindra Purkayastha kept mentioning former MLA Bimalangshu Roy. Purkayastha said, “Initially when I asked Bimal Da to join the party he denied. He said he does not believe BJP has a future. He only joined the party a year later.”

In a statement that can be deemed as damaging to late Bimalangshu Roy’s reputation, Purkayastha revealed that Roy had opted out at the last moment before the 1991 elections. “Just before the elections, Bimalangshu Roy got hurt and he went to Kolkata for treatment. I had asked him to just put a signature on the nomination form and assured him that I will run his campaign. He refused to do so and I was left with no candidate.”

Later Samarendra Nath Sen was given the ticket and he had won the seat from Silchar. “Later, in 1996, Bimal Da came to me and requested a ticket. He was the one supposed to get a ticket initially so I got caught in a tough situation. But I went to Samarendra Nath Sen and requested him to sit out and let Bimal Da contest. At this Sen got upset and told me that he is cursing me,” recalled Purkayastha.

While at one stage it looked like a press conference held to remind the journalists about his equation with Bimalangashu Roy, it became clear that it was just a build-up. Soon after mentioning the history involving Bimalangshu Roy, Purkayastha said, “Now let’s talk about the list of candidates announced by the BJP for the upcoming elections.”

He alleged that the party’s leadership offered him fake promises. “This is the third time Kanad Purkayastha was snubbed. Even, chief minister Sarbananda Sonowal told me that Kanad is likely to get the ticket. When the meeting was going on in Delhi, I was told that Kanad will get the ticket. But it did not happen. I got to know that Rajdeep Roy is behind it. Sources told me that Rajdeep Roy said if Dipayan Chakraborty is not given the ticket, he will resign from the party,” shared the former union minister.

Responding to Kabindra Purkayastha’s allegations against him, Silchar MP, Rajdeep Roy said, “Kabindra jethu is a father figure, I always seek blessings from him and have immense respect for such a stellar figure. I do not want to comment on his allegations.”