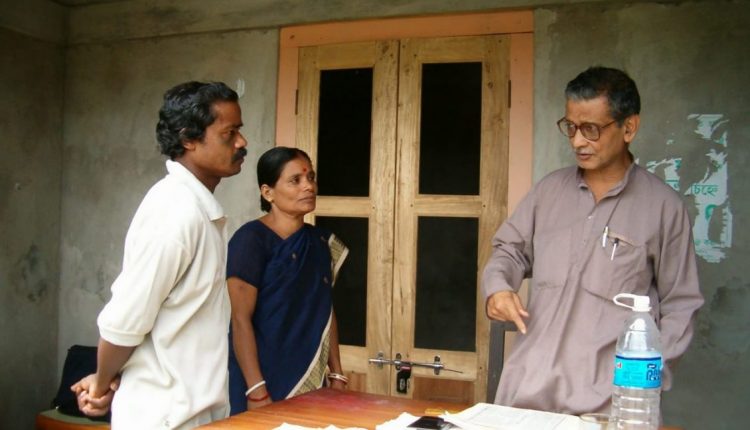 Call from my motherland got me back to Silchar from America: Dr Lakhan Das

The English version will be uploaded soon, till then read it in Bengali here

Doctors wear stethoscope and monitor heartbeats; they touch your vein to check pulse, put a thermometer in your mouth to know the temperature, they diagnose and then cure, and that is their job, which they do on a daily basis. But there are few doctors, who go beyond the medical practices, and smile at you before asking about your problem. And it’s rare to find someone, who would go out of their way, to fix your issues. Doctor Kumar Kanti Das popularly known as Lakhan Das is of the rare breed of doctors, who go beyond heartbeats and pulses, gives up his fees for the poor, cares less about himself and more about his patients. He has devoted himself in service of mankind, and that is why he is recognised as God by his patients.

Dr. Das is like that paperweight, heavy yet grounded. He completed his MBBS from Calcutta National Medical College and then practiced for a couple of years in Delhi’s Safdarjung Hospital. From there he went to America for further studies, an FRCS and FCS, Das practised for about 10 years in the United States of America. In 1987, he returned to India and joined the Red Cross Hospital. Currently, he treats patients at Kalyani Hospital in Silchar. Why would someone leave the dollars to earn peanuts? “The call of motherland,” answers Das. Co-founder and director of Barakbulletin.com Archana Bhattacharjee spoke to Das in details about various health-related issues, and the medical condition of Barak Valley, and here is what the doctor had to say…

Which is the most common disease that you treat?

Gallbladder infection is the most prominent case that comes to me.

So, what would be your precautionary suggestions to stay away from it?

Based on statistics, and my observation over the years, I can say the people who consume oily food on a regular basis, suffer from the problem of stones in their gallbladder. However, I do not have any scientific proof of that.

In Barak Valley, we see a lot of people suffer from gallbladder stones, gastritis, acidity; is there any particular reason behind this?

I think the problem lies in our food habits. In this region, people use excessive oil to cook their food, while in other parts of the country, spicy food is consumed occasionally. Here, spicy food is a part of daily life. According to me and my understanding, our food habit could be the main reason behind all these issues.

How can someone combat the ‘gas-acidity’ problem?

We need to change our food habits. We need to give up on excessive oil, ghee, masala, chilli etc.  Also, I believe, in this region, we eat much more than what’s required by the body, which further disrupts the digestive system

Since you are talking about eating habits, there are dieticians, who say, instead of eating too much in one go, we must eat smaller meals in regular intervals. What’s your take on this?

It is tough to say that. When I was in Himachal Pradesh, I observed that the labours of the region used to eat  a meal at five in the morning and leave for their work. Their next meal used to be in the evening after returning home. I don’t think they used to eat anything heavy during the day, and yet, I seldom saw them facing any problems. In fact they were very healthy.

I believe, in this region, we eat much more than what’s required by the body, which further disrupts the digestive system

You have been associated with the cancer hospital; is cancer very prominent in Barak Valley?

There are few types of cancer, which is indeed very prominent in this region, and the daily lifestyle is the main reason. Tobacco related cancer is the most prominent variant and that’s because of the high consumption of cigarette, pan, sada, and hookah. Mouth and lungs are the parts that get most affected by the disease in this region. But the fact remains that consumption of tobacco causes cancer not just in Barak Valley but the entire world.

Many people in Barak Valley now consider you close to God but initially there were people who lobbied against you?

(Chuckles) Even I heard that people initially lobbied against me but I don’t really know much about it.  See, people only oppose you, when they feel you might damage them and their businesses. To give you an example, if I had come to Barak Valley and snatched away patients from other doctors and hurt their business they would have lobbied against me. But the patients I was treating used to not pay me any fee; they were poor people in need of treatment and not a part of anyone’s revenue pie. So I was no threat to anyone’s business. I was not treating the rich patients so the opposition made no sense.

In the beginning, you also had to face a ‘paste controversy’. People believed that you used paste (adhesive) after operation. While later they understood but initially you must have had to go through a lot of trouble?

I used paste is a complete misconception; I never did that. Initially, when I started doing surgery, we were always worried about a possible infection, in the operated area. So instead of wholly stitching the dissected part, we used to leave it open. Again, there is a misconception that if we leave it open there is a higher possibility of infection, while science suggests the flow of air reduces chances of infection. If you stitch it completely, lack of drainage might cause infection. So I used to always leave it slightly open. Due to that it used to take longer to heal but never got infected. That is what happened and that was blown out of proportion, but trust me, I never used paste.

I was no threat to anyone’s business. I was not treating the rich patients so the opposition made no sense.

Medical treatment has emerged as a big business in this region; there are allegations that doctors are treating more patients than they should for money. What is your take?

Too tough for me to comment on the business part. Having said so, the number of patients is so high in this region that doctors are forced to treat more.

Despite well qualified doctors and advanced infrastructure in government medical colleges, people prefer nursing homes. Why do you think this happens?

To comment on this, we need to look at the history. I am referring to Calcutta Medical College. The CMC was a brilliant centre for treatment, patients were treated well, nursed used to take proper care of each and every patients. People of all economic and social strata, from all across used to visit Calcutta Medical College for treatment. But now, that’s not the case anymore, they prefer nursing homes, and doctors are also paying more attention in the nursing homes. We are seeing a similar culture in Silchar too, and that’s why the doctors here are paying less attention towards civil hospitals or Silchar Medical College and Hospital, and focusing more on nursing homes. This is my understanding; reality could be different.

You treat at a centre, which is located on the outskirts of Silchar. Will you return to Red Cross so that the people of town can also avail your treatment?

I am 76-year-old now; I don’t think it will be possible for me to return to Red Cross at this stage. 20 years back, I could have…

I thought if I practice in India, I might get to use my experience and lessons more effectively.

What is your take on the generic medicines? The moment they get a branded tag to them, the price escalates, is there a difference in the quality?

In my opinion there is a difference in the quality and that is my personal opinion. A lot of generic medicines come from different companies, which are not very good in quality. Let me put it this way, if I were to prescribe medication to a dearest relative of mine, I would never prescribe generic medicine. I might not be able to prove it here but there is a difference in quality.

You studied in America and then practised there for a while; what got you back to India and Silchar?

You can say call of duty for my motherland. In America, I saw people could easily reach out to a doctor and afford a treatment. In India, not all can afford a medical treatment or a visit to a doctor. That is why I thought if I practice in India, I might get to use my experience and lessons more effectively.

You often go for rock-climbing during holidays, does that rejuvenate you?

Yes, it completely energises me. We have an explorer group and that conducts all the expeditions. Whenever I go for climbing, I take a break from daily life and that refreshes me.

Let us end with a typical question, what will you advice to people to stay fit and healthy?

I had a professor in America, who used to say, “To stay healthy, keep your brain full and stomach empty”. Now this is an extreme suggestion but has some merit in it. Limited eating and keeping our brain active is extremely necessary. One must indulge into various activities to keep themselves mentally and physically fit.

Please Note: Archana Bhattacharjee’s interview with Dr. Das’ was done in Bengali. This is a translation of the Bengali version, the answers here are not his exact words but interpretation based on the interaction.