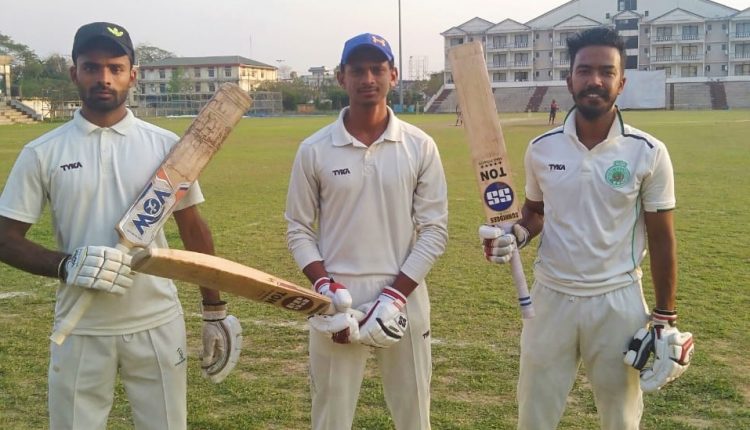 In the final round of the ongoing J. K. Baruah Trophy Inter-district Under-19 Cricket tournament, the Silchar team has gone off to a great start. At the end of Day 1 of the first match of the final round against Guwahati in Golaghat, Silchar has already managed to get into the driving seat on Monday. During stumps, the score of Guwahati stands at 26 for the loss of 2 wickets, still trailing behind the 1st innings score of Silchar by 374 runs. Earlier, Silchar declared their 1st innings after scoring 400 runs at the expense of 8 wickets.

The Silchar team, after winning the toss in the morning, decided to bat first amidst difficult conditions which suited the bowlers more. It had nice decent moisture at the start of the day. Then after deciding to bat first, they lost Aman Singh (1) and Pervez Musharraf (11) quite early with only 24 runs on the board, thus putting them under huge pressure. In this condition, Krishanu Dutta and Roshan Tapno took matters into their own hands and started building their innings gradually. For the 3rd wicket partnership, both these batsmen added valuable 195 runs to their team’s total, which helped them put up a challenging score for Silchar.

That day, Krishanu and Roshan batted brilliantly all through their innings, but unfortunately, neither of them could convert their innings into a deserved hundred. Krishanu got out at 93 and Roshan missed century merely by 1 run (99). Even though Krishanu was fortunate enough to have been blessed with some missed chances by the opponents, Roshan’s innings was flawless. Their individual departures didn’t affect their control and dominance over the game. In the lower order, skipper Shubhajit Paul (48) and Gaurav Tapno (78) also contributed some crucial runs on the board, which helped the Silchar team touch the 400 runs barrier.

For the Guwahati team, Dhruv Raj Bora scalped 4 wickets. When they came to bat after Silchar declared their innings at 400, they quickly lost 2 wickets at the start which put them under mammoth pressure. Tomorrow is the second day, i.e, the last day of the match. From here on, the chances of Guwahati making a comeback seems quite bleak as of now.

Meanwhile, while talking to Barak Bulletin, Silchar team coach Tathagata Debroy said that the decision to bat first after winning the toss was quite a difficult one to make. But such a commanding performance after the conclusion of Day 1 made sure that the decision was justified and a success. The Silchar team will surely look forward to picking some wickets early tomorrow morning to restrict the Guwahati team and gain a huge lead.