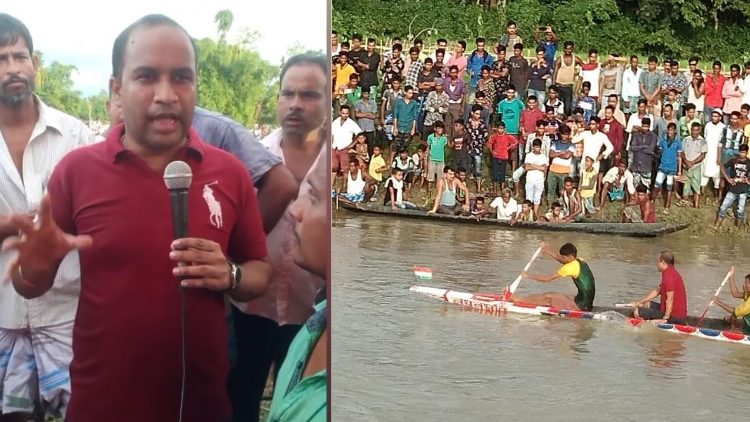 Around 30 minutes walk from Patherkandi Railway station, lives Jhontu Das. While on a daily basis, he assists a carpenter to earn his bread, whenever there is a special occasion, he joins his cousin in Silchar’s Asram Road and sells balloons. Mahalaya is one such occasion.

“This year, I heard there won’t be a gathering at Sadarghat Bridge,” says Jhontu Das. “My brother, Deepak said, it is uncertain if they would let us roam around with balloons, so I don’t think I will go to Silchar,” he says. Last year Jhontu earned Rs 1200 by selling balloons throughout the day at Sadarghat bridge. This year, due to the outbreak of Coronavirus, the administrations across Barak Valley have imposed certain restrictions, one of them happens to be a prohibition of gathering at Sadarghat Bridge.

The protocols, the administrations say are for the benefit of the mass. If the protocols are not followed, actions will be taken as per the law, adds the order issued by respective deputy commissioners. However, it turns out these protocols are only for common people and daily wagers.

In Karimganj’s Bazar Ghat area, day before yesterday, as per eyewitnesses, around 5000 people gathered to watch the extravaganza – ‘Boatracing’ which is locally popular as ‘Nouka Dour’. In this annual event, teams sail to compete with each other. Rowing attracts a lot of spectators. However, 2020 is different. Indian Premier League cricket is being played in Dubai in a bio-bubble as the gathering is not safe. Premier League – the top division football in England has also kickstarted but behind closed doors. On the contrary, North Karimganj MLA Kamalakhya Dey Purkayastha himself joined the rowing competition, encouraging more people to participate and attend.

“It was a festival,” says an attendee. There was ‘kirtan’ which followed by the MLA rowing himself and then a prize distribution. The entire episode got filmed from multiple angles and got shared again and again on social media. The MLA delivered a speech and the locals went gungho hearing their elected representative. The videos are such that one would get confused if it was shot last year as there is no presence of mask in any of the visuals. The MLA himself wasn’t wearing one.

It wasn’t an old video that resurfaced again, “I was invited by the organisers,” says Kamalakhya Dey Purkayastha. “I am not the authority who allowed it, nor did I ask anyone to gather there. I went because I cannot reject an invitation and once people gathered, I could not beat them away,” adds the MLA.

Kamalakhya Dey Purkayastha has been one of the biggest critiques of the state government and especially on its way of handling the pandemic. “BJP is running a corona-syndicate” is what he often alleged. But what about he himself flouting COVID protocols and attending an event that could become a viral vector? The Congress MLA blames BJP for that too!

“BJP has been doing meetings after meetings involving thousands. This has sent a wrong message to the general public and they have now stopped taking it seriously. This is why they are organising such events. BJP should take responsibility for the dangerous turn this pandemic has taken,” asserts Purkayastha a few hours after sailing a boat in the presence of thousands without masks.

When Purkayastha alleges BJP of conducting mass meetings, he is not lying. On July 24, just a few days after recovering from the infection caused by a coronavirus, Patharkandi MLA Krishnendu Paul held a gathering at Ishabeel. More than 300 AIUDF workers jumped the fence to join BJP. Paul posed with hundreds without masks. Later a montage was created and shared by the MLA himself on his Facebook page as a show of strength. The background music said, “Desh Badal Raha Hai.”

Congress or BJP, it is clear that the COVID protocols are not applicable to politicians. It is worth mentioning here that in one of his press conferences, health minister Himanta Biswa Sarma said that strict actions will be taken against those who organise a gathering. He was primarily talking about prayer meetings, wedding ceremonies. A journalist counter questioned and asked if it would be applicable for politicians. The health minister replied saying why not? The journalist substantiated his question by stating that BJP’s state head Ranjit Dass has been involved in large meetings and asked if the government will take action against him. “Why not, is Ranjit Dass above the law? the law is same for everyone,” added Sarma.

It is clearly not the same and Paul and Purkayasthya are the proof of that.

Jhontus and Deepaks are living in uncertainty. There are millions slipping below the poverty line as the protocols have either taken their jobs away or prohibit them from earning. At the same time, in the same land, the protocols go for a toss when it comes to earning votes. Thus the COVID Conundrum.

Here are the guidelines of Online TDC final year examinations