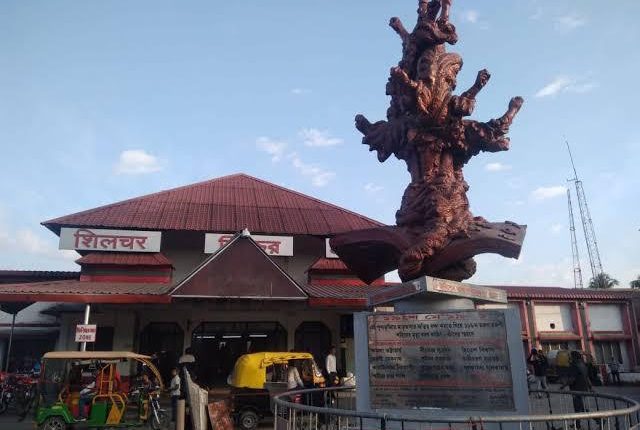 Kandari Hushiyar - Expect no mortgaging of our tongues to bigotry!

In 1962, Bengali folk poet Nibaran Pandit composed a collection of poems under the title of ‘Sei Dingulir Katha ‘(meaning ‘the tales of those dark days’) in protest of the ‘Bongal Kheda movement’. ‘Sei din gulir kotha ‘ sketches out a vivid portrayal of those turbulent times where scores of uprooted Bengalis were seeking refuge and recognition in the bosom of their own motherland. In one of his poems, Nibaran Pandit captures the eternal craving of the Bengali race for peaceful coexistence and symbiotic growth with their Assamese compatriots.

The Bengali race, while living in Assam, notwithstanding many well-orchestrated movements and political witch hunts to divest them of their cultural and linguistic moorings, has never sought to intrude into the Assamese cultural and linguistic heritage. In 1961, when Assamese was made the sole official language of the entire state, the Bengalis of Barak Valley sought to stage democratic protests against such a draconian governmental overreach. While the protests were perfectly within the constitutional ambit, the protestors were met with bullets.

11 martyrs had to sacrifice their lives in the fire of violent linguistic bigotry for the people of Barak Valley to retain the right to speak, write and think in their mother tongue. The 1961 carnage can very well find its place along with the worst unprovoked State fuelled manslaughters of the 20th century. Since the 1940’s, the Bengalis had to endure the most vitriolic and vile linguistic bigotry against their very existence in Assam. The anger against the Bengalis was a strange madness, all it ever needed was a push. And every time, for political convenience, latent insecurity, or otherwise, the Bengalis had to suffer at the brunt of such onslaughts.

Despite our morbid experience with the Assamese linguistic bigotry, the Bengalis, fortunately, have never borne any resentment towards their Assamese brethren.

And in all fairness, the vast majority of Assamese people have also embraced their brothers from another tongue with love and compassion. To bear a testament to our mutual love and respect, I am reminiscent of an experience I have had while studying at Assam University. While the Assamese students had no compunction in paying their tribute to the Bhasha Shaheed memorial every year, the Bengali students used to be equally elated in savoring the Assamese delicacies and dancing to the beats of Bihu. “Human beings are like that. We want to live by each other’s happiness – not by each other’s misery. We don’t want to hate and despise one another” – such an essential attribute of ordinary human beings holds true until bigotry is systematically injected by feeble minds and frail hearts for their own violent ends.

When the Chairman of AHSEC, Dr. Dayananda Borgohain declared, “If the people of Barak Valley don’t learn Assamese, they can get separated from Assam,” it brought back to our consciousness the gory memories of the 60’s, the flickering image of scores of destitute men desperately fleeing from the violence of people who can’t bear their existence, the derisive graffitis on the walls of pan shops of Guwahati asking Bengalis to leave their lands, the casual scornful taunts alluding our origins to Bangladesh. Wounds, when scratched, have an eerie way of festering. Since Dayandanda Borghohain is reflective of a certain vicious mindset, it is important to shed light on certain crucial facts. 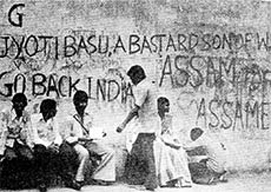 1) We will not speak Assamese if we don’t want to.

Such a declaration doesn’t flow from a mindless linguistic pride. Rather, it is an affirmation of a fundamental right guaranteed to us by the supreme law of the land – the Constitution of India.

Dr. Borghohain, despite currently chairing one of the most crucial educational bodies of the State, seems too oblivious to the mandate of Article 29 (1) of the Indian Constitution. “Any section of the citizens residing in the territory of India or any part thereof having a distinct language, script, or culture of its own shall have the right to conserve the same.” When we say we will not speak Assamese if we don’t want to, we are perfectly in consonance with our solemn fundamental right to say so. More so importantly, the right to opt-out from learning Assamese has been earned by our forefathers by a prolonged struggle involving loss of many innocent lives. So, there you go, Dr. Burghohain – we will not learn or speak in Assamese if we don’t want to. You are, however, welcome to learn Bengali, if you wish to.

2) Dr. Borgohain must be ousted immediately

Assam Higher Secondary Educational Council is one of the most crucial bodies responsible for framing the educational policy of higher secondary schools and colleges. It is unthinkable for any Bengali that he must continue as its Chairman. When his bigotry and skewed mindset is out in the open, his further continuation can only be interpreted as Governmental ratification of the same. While every political party has cosied up to the ‘Bengali pride and protection’ bogey during the elections, the least that the ruling political dispensation should do is to remove him immediately from his Chairmanship.

3) Barak Valley is not a burden to Assam, it is an integral part of it.

Despite patent discrimination in the distribution of resources and disbursement of State funds between the Bramhaputra and Barak Valley since the Independence, the people of Barak Valley have never lost their trust in the people who govern us from Dispur. Trust in our Assamese brethren to allow us a level playing field so that Barak Valley can grow along with the rest of the state must not be interpreted as a demand for some kind of handouts. The people of Barak Valley speak in one of the most enriched languages of the world, contribute diligently to the state within their limited scope and continue to accord the most amiable treatment and space to their Assamese brethren. Never should anyone make the cardinal mistake of dubbing the people of this Valley as a burden to the state of Assam. Such a misadventure, given our chequered past, can be disastrous.

If the ruling political dispensation expects our legitimate outrage to die down with time, they must be proved wrong. Dr. Borgohain must be sacked immediately to instill confidence in the people of Barak Valley vis a vis their existence in the State. With the ghosts of NRC, CAA, CLAUSE 6 hovering menacingly above us, it is important for the government to communicate to the people of our Valley-

“You are our people. You matter. “