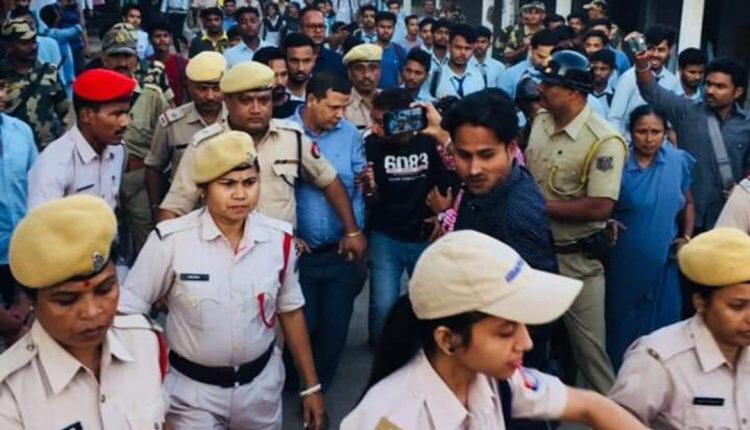 A major twist in the alleged Karimganj college sexual harassment case case. A day after assistant professor Parthasarathi Das was arrested by Police he has now been released. One of the prestigious institutions of Barak Valley, Karimganj College came to a standstill when a student pursuing graduation alleged that Das had tried to force himself on her. Her fellow students got outraged and few even went to the extent of physically assaulting him.

Police had to resort to lathi-charge in order to restore normalcy in the college premises. As per available information, the girl who alleged that Das tried to force him on her has taken the complain back. In an affidavit submitted to the court by the victim’s representative, it is mentioned that both the parties sat together and discussed the matter in detail after which it was decided that they would like to withdraw their allegations.

As eyewitness said that the court summoned the victim and asked her on record if she was forced or pressurised to sign the affidavit, to which she responded in negative. In fact, as per the eyewitness, the victim expressed to the court that it was “some sort of misunderstanding.” After receiving the affidavit and listening to the complainant’s comments, the court said, “Keeping the professor behind bars does not make any sense.”

A lawyer involved in the case said though court has now asked the Police to release professor Das, Police can continue its investigation and if it finds that the girl was pressurised it can arrest Das again.

On the other hand, a section of teachers and professors are now questioning the students and their intent. At the same time, they are also expressing their concerns over security. A professor said, “It is becoming a trend these days which is really dangerous. Every now and then we see students alleging teachers of sexual harassment. At this age of social media, the problem is that the news spreads like wildfire and the repercussions are instant. The professor at Karimganj College got assaulted and arrested. News publications called him Lampot. Now the girl withdraws the complaint. Sexual assault is a crime that exists and it must be reported. But instead of making a hungama on social media and creating a ruckus in the college premises the girl could have gone to a police station and lodged an FIR.”

For now, professor Das is free and if this case takes new turns… it remains to be seen.