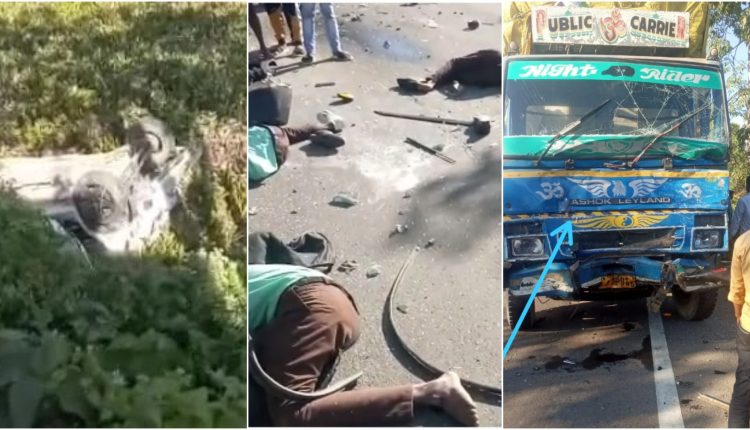 Katigorah Police has confirmed that all five students have been pronounced dead. In a fatal accident today afternoon, a Maruti Suzuki Alto collided head-on with an overloaded truck near the Katigorah-Lakhipur area. All the five deceased are students of NC College in Badarpur.

They have been identified as Arif Ansari Laskar (Gumra), Monjur Ahmed (Kalain), Jafor Hussain (Jalalpur), Salman Alom (Kalain), and Gobindo Baishnab (Gumra). The Principal of NC College informed that all of them are students of first semester. “They are B. Sc students and they left the college after their classes ended at 1:00 pm. This accident has shocked us all,” said the Principal who rushed to the spot.

On the other hand, angry locals have blocked the road and launched a massive protest against the inaction on behalf of the administration. In the same spot, two people died a couple of days back when a Tipper ran over them. Both were pedestrians and were walking back home.

“An overloaded truck passes one after another police station and nobody bothers to stop it. Which world are we living in?” questioned a local protester. The impact was so hard that the Alto car went and fell into a ditch about 50 metres away from the spot. “There are dead bodies inside the Alto, there are dead bodies on the road and the administration is sleeping,” added the protester.

Katigorah MLA, Amar Chand Jain reached the spot almost three hours after the accident took place. “The spot is just 1.5 kilometres away from his house and yet he came so late. The MLA has no sense of responsibility towards his own voters,” said the locals. Irked by the delay, the locals started questioning the MLA and as things started heating up, the MLA’s private security officers escorted him away from the spot.

OC of Katigorah Police station said that the locals did not allow the Police to reach the spot. “Two dead bodies are lying on the road and two students have been declared brought dead in the nearest hospital. One student was referred to Silchar Medical College and Hospital, he too has been pronounced dead,” informed OC Nayanmani Singha.

The locals are continuing with their protest and they have also demanded compensation to the next kin of all the respective students who lost their lives in the accident.