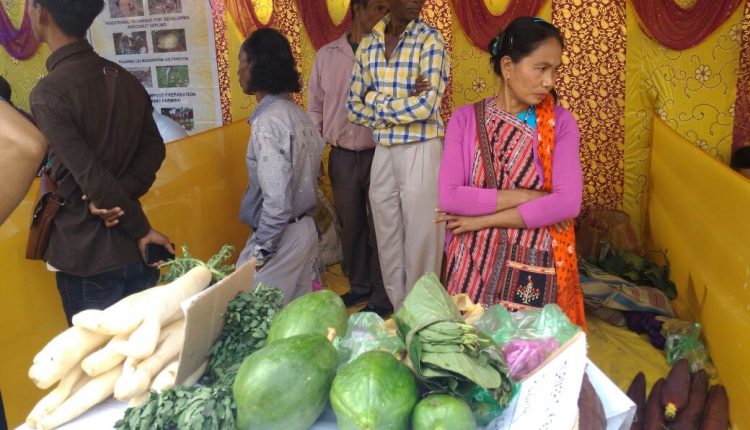 In a bid to promote organic farming in this part of the, Seva Kendra Silchar organised a display of vegetable products, which were cultivated without using chemical fertilisers at Sonai road on Friday (23 February). Large number of farmers from across three districts of Barak Valley attended the display, which was named as ‘Kisan Mela 2018’. The initiative was supported by Delhi based social organisation Curitas India, under its ‘Farm Northeast- II’ project.

Various vegetable products along with some traditional craft were also displayed at the mela, which started at around 10 am. The opening ceremony of the fair was attended by Phulakava Choudhury, project coordinator of Krishi Vigyan Kendra (KVK), Cachar, N.Singh, DDM of NABARD, Abhijit Bhattacharjee, zonal manager of PHMRI, Cachar, Parijat Bhattacharjee, City Development Officer of Silchar Municipal Board, Dipa Das, Project coordinator of Farm Northeast- II, along with Sister Nirmala from Seva Kendra Silchar.

Sister Nirmala in her speech elaborated how Seva Kendra encouraged organic farming in various villages of Barak Valley. She said, “People have large interest about consuming organic products but our farmers are not aware about it. We have been promoting it among poor farmers of this part of the state since two decades. We formed farmers groups in villages and arranged land for them where they cultivated vegetables together. Seva Kendra also supplied seeds and organic fertilisers along with other organisations, which came to support. Now, they are producing in a large amount but not getting proper market. This is another initiative of Seva Kendra to reduce the gap between farmers and market. This display will encourage them to produce more and people of Silchar will also be aware of such products which are good for health.”

Officials of NABARD, SMB and KVK appreciated the initiative and assured their support in promotion of organic farming in Barak Valley. Phulakava Choudhury in his speech said, “KVK is willing to support such initiative and we are ready to provide them all sort of technical support in future.”

Dipa Das added that Curitas India under their ‘Farm Northeast- II’ project is working in various parts of Northeast and promoting organic farming is one of their prime objectives. “As many as 43 villages in three districts of Barak Valley are involved in organic cultivation and more villages are willing to come forward. We are going to organise such display in future as well,” she said.