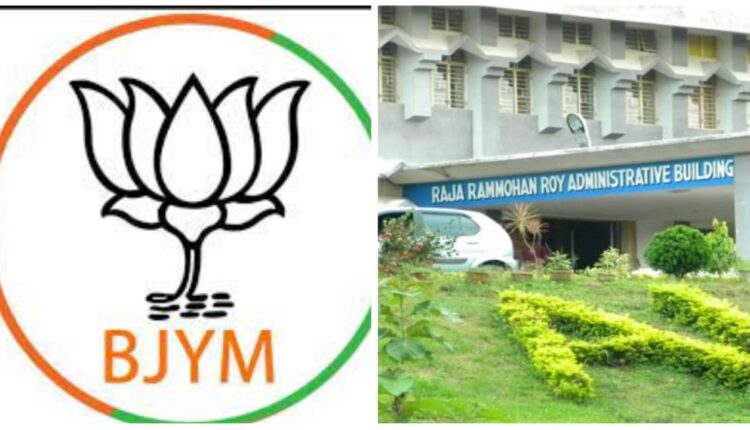 For the freshers, Assam University Silchar has recently elected the students’ union. However, the Union has moved to impeach the president who won the post uncontested. The impeachment resolution is now awaiting the acceptence of the Registrar who, according to the students, is on medical leave.

In the leaked audio, Bhattacharjee is heard saying, “They worked on their strategy for three years but I have played the game from outside, and you will have to agree that it was well played.”

It is worth mentioning here that some of Bhattacharjee’s sentences were abruptly cut in order to divert the conversation in a particular direction or to only leak parts that benefit. It remains unknown who leaked the audio file.

The leaked audio reportedly exposes BJP’s youth wing’s direct involvement in Assam University Silchar authority’s decision-making. Karimganj district president of the BJYM clearly claims to be meddling with administrative affairs. “Memorandums have been submitted to the University Authority and that is why the authority is giving him clean cheats one after another,” says Bhattacharjee. The respondent, who allegedly is the elected general secretary, says, “Who him?”. To this, Bhattacharjee replies, “Subhamoy (the president who is facing impeachment).”

Subhamoy Chanda took oath as the president of the Assam University Students’ Union after Department of Law Student, Pallab Dey mysterious withdrew his nomination before the elections. Dey had his name on the list of eligible candidates but he did not contest. However, after his withdrawal, he went on to submit memorandums against Subhamoy Chanda questioning his eligibility while remaining silent on his own suspicious withdrawal. What is even more astonishing is that Chanda or his supporter also never question Dey’s withdrawal in public. As if it was an arrangement between all sides.

The alleged expose further features Bhattacharjee saying, “ABVP’s karyakartas told me that Mama and Chacha are with me. Mama is Himanta (Chief Minister of Assam, Himanta Biswa Sarma) and Chacha is Bijoy Malakar (MLA of Ratabari). Indirectly, both of them are empowering me. District Administration won’t side them entirely. I have managed that too. DSW (Dean Students’ Affair) won’t be able to do anything, we will get him changed too. Just wait and watch.”

These astonishing claims that Bhattacharjee is heard making poses serious questions about the sanctity of the University. Should BJYM decide the fate of Dean Students’ Welfare of a Central Varsity?

If the audio recording is not engineered, doctored, or morphed then this deserves top-level investigation with the potential to lead to a complete structural rejig at top of the administration.

Bhattacharjee is heard saying, Subhamoy Chanda is just the face, the fight is somewhere else. “The CS will not get anything. I have already informed the president and he won’t sign anything without my consent,” says Bhattacharjee.

He does not stop at bragging about his influence in the administration. Goes on to comment on the sanctity of the high court. “I will take care of all the legal proceedings. The next in line to the Chief Justice of the High Court, without whose signature no appointment letter is issued, is my Jethu (uncle). I have my links everywhere. If I take the case to his bench, forget one year, justice won’t be delivered in five years.”

Some parts of the conversation are edited and in all probability, his conversation from some other day which was also recorded has been attached to the sequence. He is heard saying, “As I have become the district president, everyone has turned against me in Barak Valley. Rajdeep Roy (MP of Silchar), Krishnendu Paul (MLA Patherkandi) who is the MLA from my district are also against me. If you see my scenario, every day, I am getting a new responsibility. I am the nominee at the Medical College (SMCH), Labour Office, MLA’s nominee in DC office, power of the entire Karimganj administration is at my will.”

Reacting to the chain of events, Biswarup Bhattacharjee said, “I too have heard this audio. I want to put this on record that I am not involved in the conversation. In all likelihood, the audio has been dubbed. The simple proof of that is that there are factual errors in what is being said. If I was saying all that, why would I feed wrong information about myself? What I also want to say here is, I too have some audio clippings which may expose who are behind leaking the manipulated clip that frames me.”

Bhattacharjee added, “I have moved to mainstream politics and my rapid growth is intimidating people. That is why they are framing me and demeaning me is public eye.” When asked if he will take legal route as he believes the audio is dubbed, the former president of Assam University Students’ Union said, “When in public life and mainstream politics, there will be a constant effort to defame me. Should I be lodging FIRs against each of them? At the end of the day, I have joined politics to serve at the pleasure of the general public and not fight legal battles. Yet, I will seek legal advice and decide future course of action.”

This audio-visual file has been doing rounds for a couple of days and what makes it even more conspicuous in the mysterious silence of both University, District Administration and Bharatiya Janata Party.